Bourbon barrel purchase worth it for home brewer?

Not sure exactly where to post this so put it in General.

I'm thinking about purchasing a Bourbon barrel to age some of my Imperial Stouts in. Couple of questions.

For a home brewer how many times can the barrel be used until there is little or no bourbon/oak flavors injected into the beer?

Do you home brewers who use barrels feel the cost is worth it?

I own three ten gallon barrels, all previously had bourbon/whiskey in them.
I paid $100 each for them.

You can go at least four batches and add spirals after that if need be.
I've also seen where I believe that it was Russian River that put stainless steel chains in them and rolls them to open up fresh areas to extend the usefulness. I'm not sure how well that would work, but that is what I had heard.

The other two have sours in them, one has a super Saison and the other a Flanders brown.

I feel that they are worth it, it's up to you and your finances. 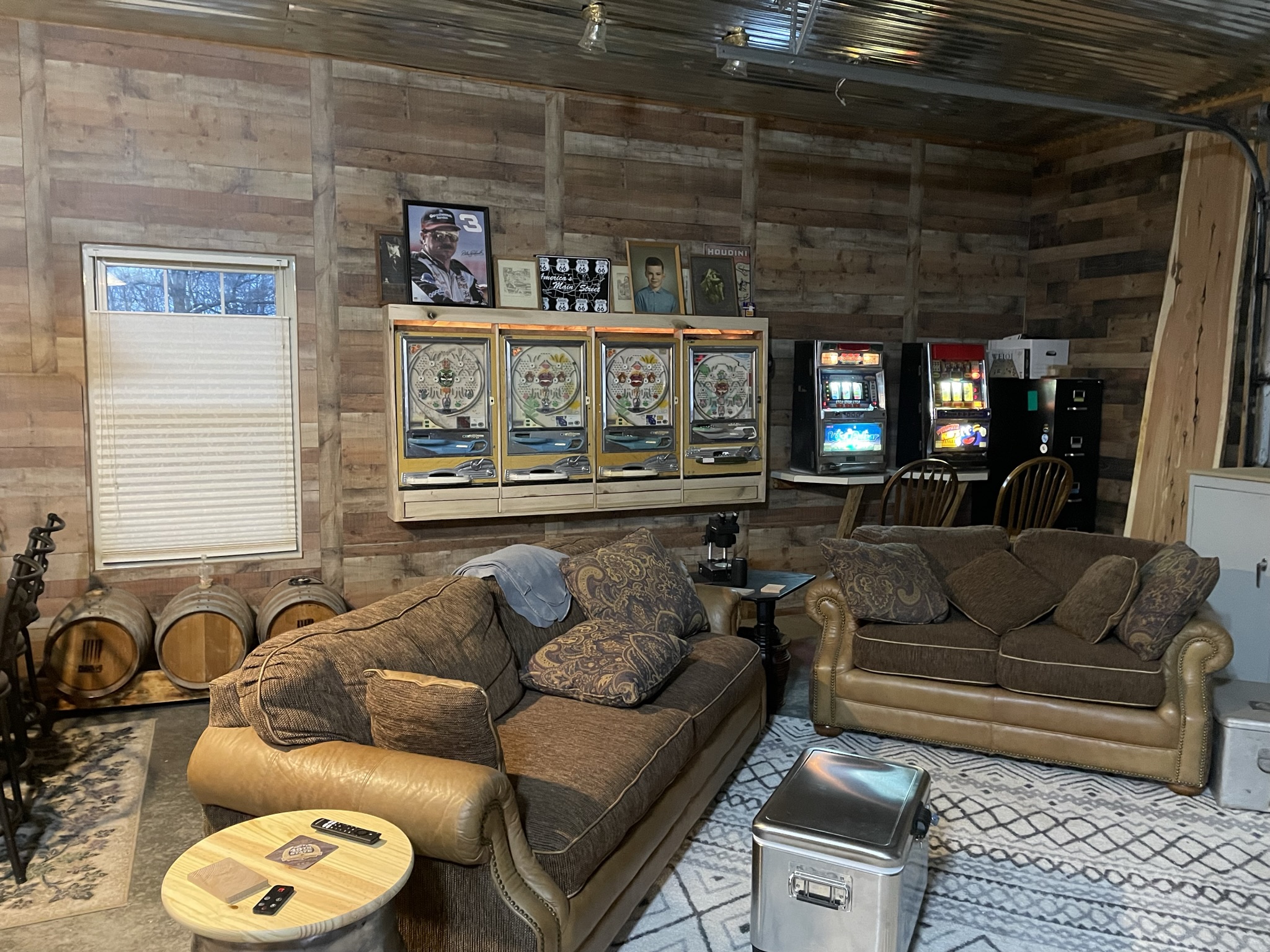 You can see the barrels behind the couch.
OP
OP

Absolutely helps. Thanks. Are you putting 5 or 10 gallon batches in them?
I

Not sure exactly where to post this so put it in General.

I'm thinking about purchasing a Bourbon barrel to age some of my Imperial Stouts in. Couple of questions.

For a home brewer how many times can the barrel be used until there is little or no bourbon/oak flavors injected into the beer?

Do you home brewers who use barrels feel the cost is worth it?

It was worth it for me since I enjoy barrel aged beers.

I used my 15 gallon barrel for 3 batches, now it is used as a table in my basement.

For each fill you will need to age the beer in the barrel longer to extract the "barrel flavors". My first use I aged for 4 months, second use 6 months, third use 8 months. I quit after the third use in fear that the beer would turn sour.

I suggest brewing enough beer for "top off" since the level in the barrel will diminish over time due to the beer being absorbed in the wood and some evaporation. By reducing the oxygen will help prevent the beer from turning sour. I also recommend soaking the barrel with hot water (180 deg) with campdon added to swell the wood to prevent leaks and kill any "bugs". After the initial fill, be ready to fill it back up with another batch, unless you are doing the solera method, to prevent the wood from shrinking which can cause leaks.
D

BoitAHL said:
Absolutely helps. Thanks. Are you putting 5 or 10 gallon batches in them?
Click to expand...

Always ten plus, I think that they actually hold a bit over eleven gallons, and I try to keep some around for top ups.
The two sour barrels, I do the solara method.
Also, I rubbed then with paraffin wax to seal them up and slow down evaporation.
Two I used a torch to melt the wax into the wood and the other I used a heat gun.
OP
OP

Dr_Jeff said:
You can see the barrels behind the couch.
Click to expand...

Where is the pinball machine?
D

BoitAHL said:
Where is the pinball machine?
Click to expand...

I really don't have room for one and have not seen one for sale withing driving distance.

I like using the smaller barrels and recharge them with bourbon after each use.
M

I bought a 5 gallon barrel. I read that the time in barrel needs to change with batch size and I definitely found that to be true. My first batch of barrel aged stout was in the barrel 4 weeks and was a touch much. The second 3 weeks that was about perfect. I to recharge with bourbon between uses. Its sitting empty (except a bottle of Wild Turkey 101) and I need to decide what to do with it next and there lies the problem with a barrel...need to keep using it.

Our club does bourbon or whiskey barrel brews. We get a 15 gallon barrel or two and 3 brewers brew 5 gallons of the same beer to fill the barrel. One of our members hosts it at their house and the beer ages 3 months, 6 months or whatever is decided.

The first 2 beers will be the best and the cleanest. After that the barrels start to go off. So the first 2 you do a bb RIS or a bb barleywine. After that you do an old ale where you can tolerate a little brett or whatever. Some of the guys have added brett to the barrel after the first couple beers. Then they do sour beers or whatever after that. Once you go brett or sour, you can’t go back.

I’m mostly a clean beer guy. I won’t get in on a barrel brew after the second use. I don’t like sour beers or brett beers, etc. But thats me.

A different note, these strong bourbon barrel aged beers are not usually every day drinkers and it can take quite awhile to go through 5 gallons. Many of us have stories of kegging one of these beers and having it take up a tap for a year and a half or two years. In my opinion, these beers are best bottled.

You can achieve similar results for a whole lot less cost buying oak cubes and soaking them in bourbon yourself. 1 oz of cubes per gallon is a good place to start.

[edit] If I could ever get a 5 gallon barrel I would think about buying it for my own use. But those are few and far between and really hard to get.
Last edited: Mar 25, 2022

Barrel #1 was fresh roasted, no spirits inside, and has since held: Port, Red Wine, Blackberry Cider, and now is holding a Blackberry-Sauvignon Blanc Wine. Unless I chain the inside, this will be the last clean aging, as the vanilla-oak character is way diminished. I may use it as a Flanders Red solera.

Barrel #2 is a Rum barrel, currently holding a wild-fermented passionfruit cider. It was very dry when I received it and isn't adding much character even though this is the first fermentation inside. This will be the wild cider barrel from now on, but I may boost the rum character by rolling some fresh rum around in it, IDK.

Barrel #3 is a Bourbon barrel holding its first Imperial Stout. I have another stout (Bourbon & Spice) that is going to go into it after this one for the 12BOC 2022. Then I think a Barley Wine, and then either chain it or sour it, IDK.

As these are 5G barrels, we completely wax the outsides with a torch to slow down the evaporation/O2 transfer. 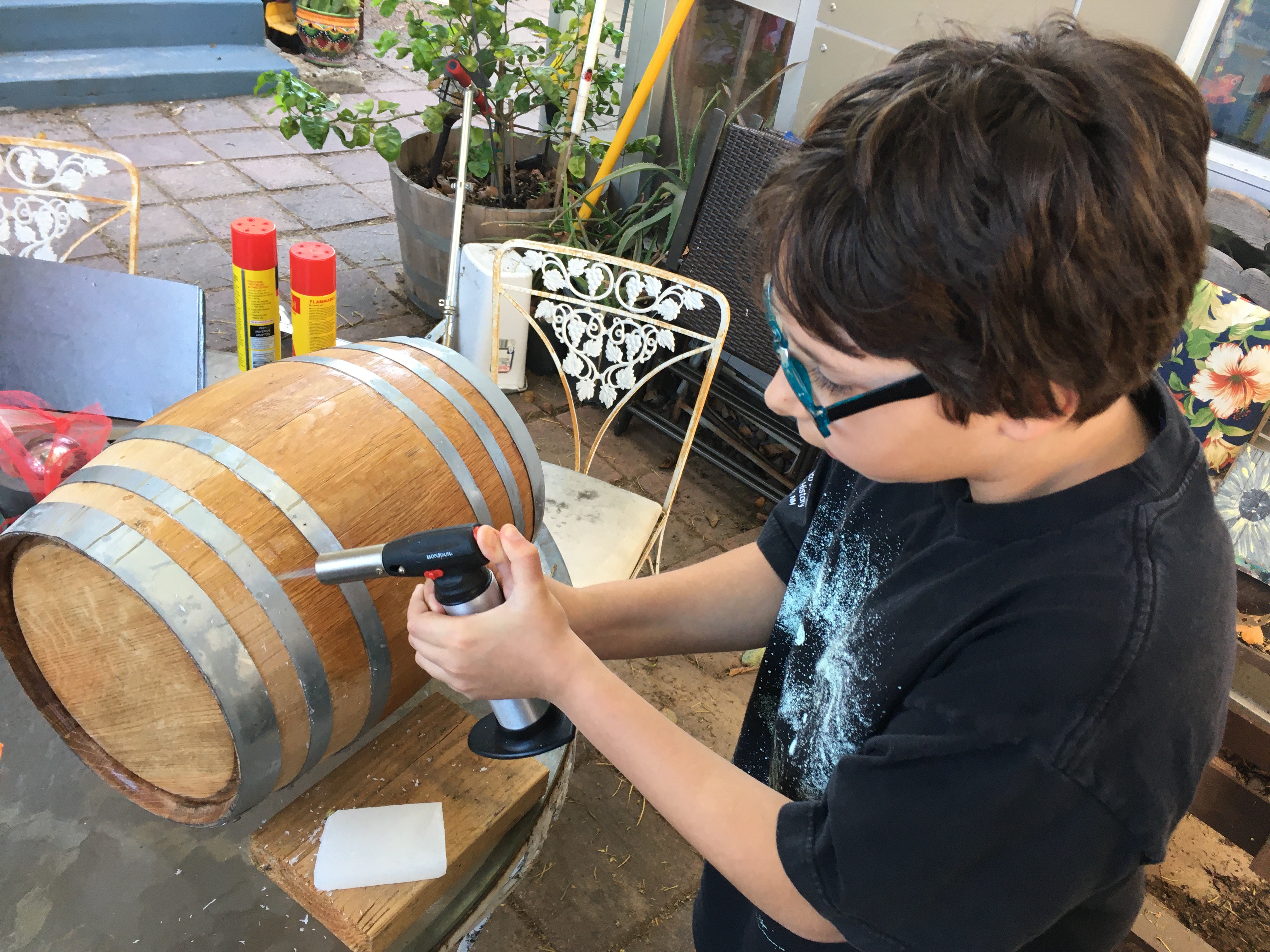 The common theme here is folks eventually using the barrels for sours. I also had a friend that would make things out of spent barrels and sell them at the local winery. He already had all the barrels he wanted for sours. Basically the question is, do you have a plan for end of life of the barrel. If you have that answered, they are definitely worth it.

Funky Frank said:
Basically the question is, do you have a plan for end of life of the barrel. If you have that answered, they are definitely worth it.
Click to expand...

and there is always oak chips?

I used a Balcones barrel, somewhere over $100 bought in San Diego maybe 4 years back... got 3 or 4 batches out of it, after that I stored it for a bit and ended up with mold. The barrel was a pain but it was probably the most fun I've had in brewing, and perhaps some of the best beer too, I say go for it!!

These days I have less time on my hands and I use oak cubes - much easier to manage, same or similar flavor, none of the hassle of a barrel. I've become a patient and lazy brewer and I have no problem waiting 6 months to a year for a beer to get that oak flavor from the cubes. But it's still just the next best thing from the barrel!

Up until now, I had always done my sours and big beers in glass carboys for long-term aging, either with cubes or spirals for oak. Now that I have the barrels, I am expecting the character to change a bit, but I was always pretty happy with my process results before.
OP
OP

Thanks to everyone for your advice and opinions. I'll stick with cubes for now but will definitely think about barrels in the future. Seems it does take a bit of work to maintain them. I'm also a bit of a lazy brewer.

Then there is always that fresh cask ale where you get to display your stick to signal it has been tapped.

"barrel ageing" with oak chips in a keg?

Deja Vu All Over Again