My concern is, this yeast is very high flocculation. In both the package I got from the lab, and the starter I made, the yeast basically glued itself into a mat at the bottom of the container that I had to scrape out. Shaking/swirling couldn't budge it.

I've seen a few places claim that Kveik can be so high-flocculation that bottle conditioning becomes impossible since there's not enough yeast left in suspension to carbonate the beer. Anyone have experience with this strain — is it true? Is there such a thing as yeast so flocculent that you can't carbonate it in the bottle? Or does it just take a bit longer?

Haven't had much luck finding testimonials about this particular strain since it's still fairly new.

That's an interesting question, I just got some Voss Kveik from Omega and haven't used it yet.

I subscribed in case anyone had a good answer, but my first thought was that you could add another strain at bottling if needed.

I used the omega hornindal kveik and it is by far the haziest beer I've made. The omega pack literally says flocolation: low to high. I fermented at 80° F and cold crashed and after about a month in the keg it's still pretty hazy 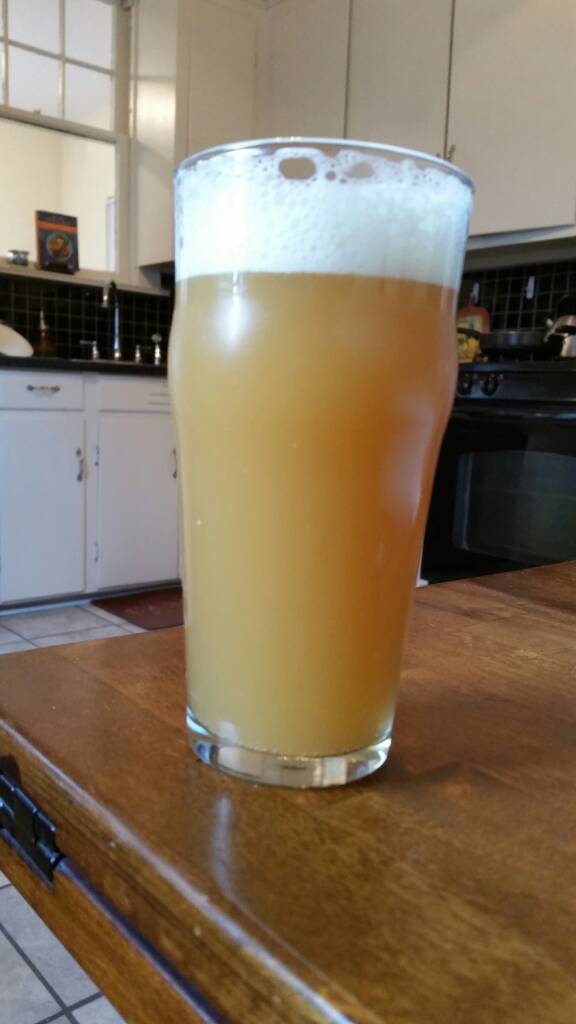 Bottle condition warm might help. If your worried it will floc in fermenter repitch some at bottling. Love to hear your impressions. Have not used this one yet but very interested.
C

Though I have not used this strain, I find it very hard to believe that your yeast will drop out so much it can't bottle carb over the course of 2 weeks. Even though a lot drops out, you should still have a substantial population in suspension to provide carbonation. At any rate, there is only one way to find out. I suggest bottle carbing without adding an extra yeast just to see how it goes. Wait a full 2 weeks, and let them carb at room temp, away from sunlight. And let us know how it went.

I've used Hothead yeast from Omega for 2 beers and I had saved some bottles for a few months, so it worked well. I am however not familiar with Hornindal Kveik Blend, but I don't belive you will have any problems. Yeah, high flocculation is nice, but I doubt you will face problems if you are bottling.
OP

Thanks for the replies everyone. In the interest of science, I'll try bottle conditioning using my normal process, without re-pitching or adding new yeast. Then I'll know for sure whether it works or not.

Just came to add that I used Voss In A blonde ale without a dry hop and it’s Similarly hazy with no sign of clearing up. First couple pours had yeast settle out but since then nada.
OP

Update: I bottled with 150g of corn sugar. Let it sit in my un-air-conditioned apartment during a heat wave (85-95F). Sampled one after about 6 days in the bottle.

It's already carbonated OK, so my concern about not being able to bottle-condition this stuff was unfounded. At this point I could declare the experiment over, but I'll talk a bit more about how it turned out.

The beer is quite hazy, murky even, and the colour is a dull orange or tangerine. Almost no head.

As for the taste, it's… something else. There is a lot going on in this brew, but not in an altogether complementary way.

I got some of the fruity hop aroma that I was aiming for, but there's a bit of grassy asparagus undertone and a bitter aftertaste that creeps up on you. I only did whirlpool and dry hopping with citra + galaxy so perhaps the yeast contributed somehow.

The weirdest part by far is the lingering peppery taste produced by the Hornindal yeast. The more you drink, the spicier it gets. If you take a quick sip, it coats your tongue and tingles like you just licked a jalapeno or something.

Anyway, not a complete success, but hopefully it'll improve with age. It could be decent if some of the strange flavours mellow out a bit.

No chance that’s hop burn? Or even burn from the yeast itself(not the yeast driven flavors/esters )? Any chance this was one of the last bottles to get filled?

I’ve experienced that burn sensation but it ended up being hops left in suspension that fell out after a couple days legged. This was my first ever brew and I had no idea you had to pull off the first couple pours.

Edit: I’m also curious if the haze has to do with fermentation temp. I did my blonde at 90 after reading lots of recommendations to make sure I got the orange esters. However the starter I reserved for the next batch has now entirely dropped clear in the fridge and this was fermented uncontrolled at room temp ~75. The starter also doesn’t have any hops so of course they could be adding to the cloudiness too. I had read many posts that said it would flocc hard and one could make a pseudo lager with these yeasts but so far that doesn’t seem possible.
Last edited: Jul 9, 2018

I just brewed a sour raspberry saison with TYB voss kviek... it's my 5th gen use. It's super hazy even after being kegged a few weeks. Might be a fun try for a NEIPA!
OP

BeerFst said:
No chance that’s hop burn? Or even burn from the yeast itself(not the yeast driven flavors/esters )? Any chance this was one of the last bottles to get filled?
Click to expand...

I don't know: this is the first I've heard of hop burn or yeast burn (this is only the 6th batch I've ever brewed).

I've sampled 2 bottles so far now: one was the last to get filled, but the other was from near the middle of the batch. The burning sensation DOES seem to get stronger as you get closer to the bottom of the bottle where all the sediment is, though. So it could indeed be due to the leftover gunk from the yeast or hops. I'll see if it drops out as this stuff matures.

My fermentation temps were not very well controlled, ranged from 77-89F depending on time of day, so I can't conclude much about the temperature's effect on haze. I did save some of the post-fermentation trub in a bottle though, and it's flocculated very strongly in the fridge like the original starter did.

And how does the beer taste after some aging? What you describe as spicy asparagus or similar sounds like the hop burn I get off my Kveik imperial NEIPA that is raging in my fermenter right now.
OP

The nose has a prominent hop aroma, very fragrant like you're taking a whiff straight out of a bag of hop pellets.

Take a sip and the initial impression is not terrible, has a pretty forward citrus aroma with only a few hints that something is wrong. Shortly after that, you're hit with a weird mishmash of inappropriate flavors. Some tangy fruits, some hop kick but all overwhelmed by an acrid tongue-coating bitter vegetable flavor that sticks at the back of your throat.

The spiciness that I posted about originally has definitely mellowed out -- so maybe it was hop burn? But the overall result still ain't good. The drain will be enjoying more of this beer than me.

For what it's worth, I brewed another beer using a 2nd package of the Hornindal yeast and a less ambitious recipe: a saison with a modest amount of perle hops. That turned out fine. So I'm guessing it was my misuse of hops, rather than the yeast, that made the other batch turn out so poor.

I used Voss Kveik (dried) and it fermented amazingly well in 3 days in my garage at 90+ degrees. However, when I cam to bottle it a few days later, there was clearly not enough active yeast to carbonate, I got an almost flat beer after two and after four weeks (stored in my cellar, not in the fridge).
I would say you definitely need to add carbonation yeast, but what type and how much, I don't know....time to experiment.
You must log in or register to reply here.
Share:
Facebook Twitter Reddit Pinterest Tumblr WhatsApp Email Link