Going all grain today. I just finished my Zapap. Since I live at 6200', I added some insulation - seven layers of closed cell packaging sheet. I'll send a note out later after I see how it works. 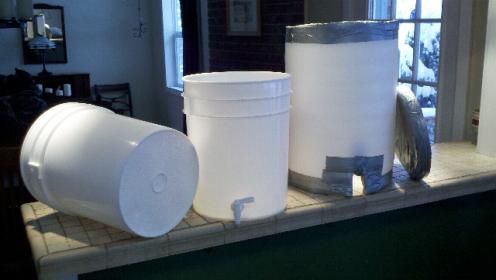 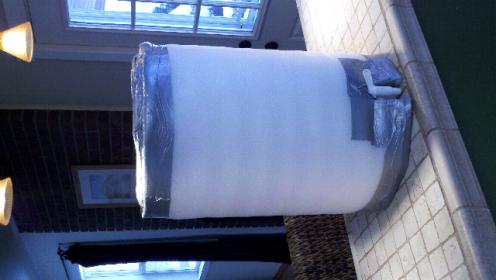 Can you provide a close-up picture of the bottom of your perforated bucket? What size drill bit did you use? I have thought about using that system since I was too lazy to put together a mash tun, but since I have one I probably won't. However I am still interested in what it looks like in detail and how well it works as well. I have also heard about it being using in conjunction with a BIAB type setup to help filter out additional grain. I suppose that is only necessary if your holes were too wide.

I used to use that type of lauter tun. I would do stove top mashing, then xfer to zapap. It worked great. The only real issue that I had was that if the level got above the rim of the lower bucket, it would leak out the side. I would put a bead of food-grade silicone or something around the edge of the straining bucket where it rests on the bottom bucket and get a three or four small C clamps to ensure a tight seal between the two. Less mess!

I used a 1/8" drill bit for the holes in mine. I think that was what C.P. prescribed.

My first all-grain was with the zapap. I did a wheat beer and had a stuck sparge. The night was a total loss. Hope it works better for you.

By the way, maybe I'm the only one who didn't figure this out right away, but Zapap is Papazian's name backwards.

Wow, I didn't think anyone still used the zap pap method anymore. I thought the cooler method pretty much replaced it. Good luck.

Oh geez passedpawn, I never got that until you mentioned it.:slaps forhead:
OP

The brew is chugging away in primary so it's not a total loss yet. I'm not one to count it as a loss until it's undrinkable. There is always hope. Lessons learned: Double check the grain bill, keep some dme on hand, manage the hot liquor tank better, buy unbreakable thermometers, plastic valves on plastic buckets might not be the best choice for hot liquids, and clean out the holes.

I had at least one strike against me when I laid out my grain for the mash and realized I was 1 lb of Vienna short. For reasons beyond my control I couldn't get it, didn't have dme, etc.. So I put the recipe in beersmith using the ingredients I had and it looked OK so I moved forward.

The Step went great - temperature held (gained 5 degrees actually) for a 75 minute step at 150, so the blanketing worked well. Then things got a little challenging.

I used my primary (which is also my bottling bucket) as my hot liquor tank. It was partially full (maybe 1/4 or so) and I was heating the rest of the water in my boil pot and broke my thermometer in the pot - so I poured out that water, refilled (estimating volume at this point). While I was filling it I didn't notice the now softened valve on the HLT was partially open so the flow as going unmanaged into my zapap. As @wailingguitar foresaw once it hit where the buckets come together it leaked - I didn't notice until I had lost about three cups of early runnings onto the floor. Since my water pot for heating my hot liquor is also my boil pot - I had to pull out an intermdiate smaller pot for what was left in the MLT. Once I got the flow under control (wife laughing at the table not about to leave her premium seat for the show) I got about halfway through the sparge when it stuck. I tried several ways of pushing through without disturbing the grain bed - none worked. I wound up using my paddle to stir the mash until I got enough out to work with. To answer @keesh - I drilled 1/8" holes and will provide a picture once I finish cleaning it out. The drilling left a plastic squiggly crumb in about half of the holes, and a sharp texture along the inside of the bucket - I need to redrill the partially occluded holes and take a blade to the inside of the bucket - I think that may help the flow.

After the boil, cool, and running it through a paint strainer bag I have about 4 1/2 gallons of wort at an OG of 1.045 (I wanted 1.05, but loss of those early runnings did me in). If I would have had the foresight to keep some dme on hand I would have used it in this batch to keep the gravity up.

The silver lining (beyond the currently chugging primary of course) is that the Mrs. is starting to ask what it would take to not have so much mess - we are beginning negotiations on a budget for a brewery that we don't have to move around. Knowing her penchant for things being pretty and orderly I am proposing a nice stainless setup - she's OK with it so far.

I'm planning a Cream Ale next (2-3 weeks). I may zapap it again and try to get it right, or I may try BIAB.

@passeddawn & @revvy, it may be a total loss ultimately, I'll let you know in a few weeks. The cheapness and simplicity of the zapap appeals to me. The cooler may be the better way to go - or maybe the bag.
OP

This beer tuned out great. Once I get my chiller operating I will make more.
B

Blankets To Warm Fermenter Up