So what is your favorite combination of homebrew recipes for making Black and Tans? I know that the obvious would be a Guinness clone and a Bass clone, or Harp clone.

What other interesting combinations have you come up with?

Maybe a porter instead of a stout?
There is speculation that the Black and Tan started with porters, not stouts...

and what about the tan?
I was thinking of something like the Haus Pale...

Rosehill, as in Kirkland???
I lived in both Redmond and Kirkland, used to drive over Rosehill all the time.

That's the place. I used to work in Kirkland and lived in Redmond. I think I was their every night.

I still talk to Kerry every once in a while.
OP
OP

Where were/are they at on Rosehill? I last lived up there in the early 1990's, and for some reason I don't remember them. Were they even around back then?

Mississippi Mud and Sam Adams Boston Ale, We made these a few years ago but I dont even know where to get MM any more.

I've had a Black Magic which was Guinness and Magic Hat #9 which was ok...and i've had a black and gold which is yuengling porter and yuengling premium, that was pretty good

It was just east of Waldo's on NE 85th. It's now called Pub 85 and the beer lineup is nowhere near as good as the Rosehill Alehouse used to be.

There's a pub in Minneapolis named O'Donovan's that I've gotten black & tans made with Murphy's Stout and Amber. Very delicious.

A store here in Coldwater, Mi. sells Mississippi Mud & its labled as a Black & Tan.
G

RICLARK said:
Mississippi Mud and Sam Adams Boston Ale, We made these a few years ago but I dont even know where to get MM any more.
Click to expand...

We have MM at Publix in Florida. Only place I have ever seen it.

The Black and Blue up here is Guinness and Sea Dog Blueberry....yum

My favorite, locally, is Empyrean Ales' Collapsar Oatmeal Stout.... with something for the "tan", most likely their Third Stone Brown or their Luna Sea ESB. I can't remember which. Guess I'll have to go order one, eh?

At home, I've made similar with Guinness (no Collapsar off-site, since it's Nitrogenated) and Empyrean's Chaco Canyon Honey Gold.

I love Black and Tan's. Traditionally, they're not even SUPPOSED to layer up, you're just supposed to mix and drink. Found that out at the Great Dane in Fitchburg.... what was their B+T? John Stoner's Oatmeal Stout and Sugar River ESB, I think.

As far as homebrew goes, I tried a ruination IPA clone and a Oatmeal Coffee Stout black and tan that was pretty decent. And commercially I have tried a "Poor Man's Black Velvet" which is Guiness and Hard Cider. Deffinitely an experience to say the least, but not bad actually.

Go Gators said:
We have MM at Publix in Florida. Only place I have ever seen it.
Click to expand...

Come to think of it now I think the MM I had was brought back by my Bro In Law who made a trip to Florida, I used to see it all the time in this little Farm Market near me but it has Vanished.

Hoppin Frog out of Akron, OH sells a Bodacious Black and Tan which is a combination of their IPA and imperial stout. I havn't had this beer yet but I love their stout and the IPA is very good also. The OG on the stout was over 1.1 and the IPA was about 1.070 so the combination would definitely be a big beer.

I love BORIS (Bodacious Oatmeal Russian Imperial Stout) The Crusher, one bar i frequent has it on tap, i saw a bottle of the Black & Tan and i am planning on trying it at some point

I've been pouring Black and Tans with my homebrew "Pascha's Porter" for the Black and Biermuncher's Aberdeen Brewery Session Haus Ale for the Tan.

Wikipedia has a cool list. SOme sound mighty tasty, and some sound...Interesting.

Half and half
In Ireland, a traditional Half and Half consists of half warm or room temperature Guinness and half chilled Guinness. In the early days, refrigeration was of course unavailable. As refrigeration came into existence in the 20th century, it was found that a mixture of the two temperatures created the perfect drinking temperature for Guinness. Most Guinness poured in Ireland is served at about this temperature, roughly 44 degrees Fahrenheit (6° Celsius). In the Unites States, Half and Half consists of Harp's Lager topped with Guinness. Half and half implies that both ales come from the Guinness Brewery.

Black and White
Stout with any light colored beer.

Black and Blue
Stout with Blue Moon Belgian White, or stout and blueberry ale, Guinness and Pabst Blue Ribbon, Guinness and Labatt Blue. Typically, this refers to any variation of stout coupled with blueberry-flavored ales or brands with the name "Blue" in them.

Black and Orange
Stout and pumpkin ale (Also known as a "Black & Blumpkin", or a "Black-O-Blumpkin"[The Gilded Otter Brewpub in New Paltz, New York calls this mixture a Stumpkin])

Garnet and Black
Guinness and Killian's Irish Red. This is a regional variation in South Carolina, named after the school colors of the University of South Carolina.

Old Dirty Englishman
Half Guinness and half Tetley's

Philadelphia Black & Tan
Half Guinness Stout and half Yuengling Lager

Black & Gold
Half Guinness Stout and half hard cider (e.g., Westons or Woodchuck). Sometimes incorrectly referred to as a snakebite, which is actually a mixture of half lager and half cider. When made specifically with Woodchuck Cider it is also called a Stout Woody

Black & Red
Half chocolate stout over half raspberry or cherry lambic

Black & Red
Half Guinness and half Red Stripe

Black Hoe
Half Guinness and half Hoegaarden.

Irish American
Half Guinness and half Budweiser.

Irish Canadian
Half Guinness and half Molson Canadian

Black Castle
Half Guinness and half Newcastle Brown Ale.

Black Tire
Half Guinness and half New Belgium Fat Tire

Irish Anarchist
Any Irish stout atop any Irish red ale. The name is a reference to the anarchist-syndicalist flag, which is black and red.

The Greatness : Half Guinness and Half Great White. (Great White is from Lost Coast Brewery in Eureka, Ca.)

Eclipse/Black Moon
Half Guinness and Half Blue Moon

Tetness Shot
Part Guinness and part Tetley's and part Starbucks Coffee Liqueur. Be careful; this one stings a bit!

Green Goblin (invented by Geoff Wayne)
Half Heineken and half Hobgoblin

Black Magic
Half Guinness and Half Magic Hat #9

Ugh....Guinness and bud? Philistines.
A

I made an imperial stout one time. I left in a tertiary carboy for a year without looking at it, bottled it, and then waited about 3 months to try it. It was okay but not great . . . I figured I'd screwed something up so I started making black and tans with a Fat Tire clone. (The flavor was off on the FT clone too . . . tried "kicking it up" with some extra DME.) Anyway, it was a great combo.

As it turns out, the imperial stout just needed some more time in the bottle. It's been bottled for about 15 months now and it's incredibly good. Makes me wish I hadn't mixed so many bottles with the FT. The few that remain are opened only on special occasions.

I just found out the a Black and Tan made with a Stout and a Tripel is quite good. Here is mine: 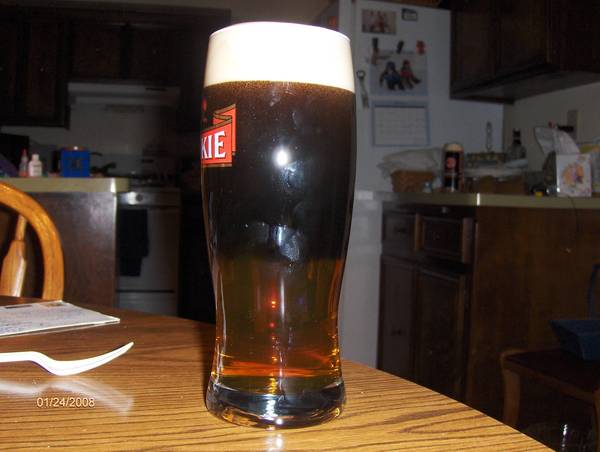 I call it a Tripel Black.

Feel free to substitute Edmund Fitzgerald for the dark beer in the following combinations:

I had a black and blond at a local brew pub made with an oatmeal stout and a hefe. It was delicious, but they sure need to learn how to pour it right.

RockfordWhite said:
I love BORIS (Bodacious Oatmeal Russian Imperial Stout) The Crusher, one bar i frequent has it on tap, i saw a bottle of the Black & Tan and i am planning on trying it at some point
Click to expand...

Where'd you find BORIS on tap? I love that brew but have trouble even finding it in specialty stores.

Sorry for the zombie thread resurrection but it is topical for me.

Black and tans of various incarnations are my favorite. I have tried many varieties with Guinness and Red Stripe being my goto pairing so far.

My LHBS set me up with a recipe based on his knowledge and a look at Guinness and Bass clone recipes. End up with a large grain steep leading into an extract brew. Today was the first day that the bottles are conditioned enough to come into their own. A true black and tan feel and taste out of one brew. Kind of reminiscent of Miss. Mud when it first hit fairly wide distribution and before it was swallowed up and changed by bigger companies.

R
Too much dark roasted malt