I made the switch to BIAB about 6 brews ago. Current setup is a 15 gallon pot over a propane burner and using a BIAB bag. Ratchet hoist to lift/hold bag. I have seen that some people are using a metal mesh basket instead of a bag. Just looking for any pros and cons to bag vs basket. I do not have any experience using a basket but below is what I come up with just thinking things through. Any others?

Bag:
Pros - less cost, easy to clean
Cons - might tear, could burn if sitting on the bottom and heat is on

Basket:
Pros - stronger (won't tear), won't burn, could use pot clips to hold basket up if not brewing under my hoist
Cons - more expensive

I've seen folks utilize a raised screen akin to a mash tun false bottom in their pots to keep a bag from resting all the way at the bottom, tho I don't think it would be as necessary if you were not recirculating.

While the normal mash temp range does not get into the poly-bag melting point danger zone (350F ish), there is a concern of "superheating" the mash at the bottom near the heat source, due to the insulating effects of the grain.

This is one of the vendor's takes on your question.

How well does the kettle hold its heat during the 60-90mins of mashing? Reflect-X or similar has been utilized by many here wrapped around the kettle for additional insulation, which would minimize the need for periodic "flame-ons".
J

Con for a basket is that it doesn’t take up as much mash volume as a bag. I ran into water to grist ratio problems.

I would be curious if the lager holes in a basket would mean you could not grind grain as fine as with a bag.

Note that I have had my bag in the pot with the heat on before. I have thick clad bottoms on my kettles and I use either propane (for my 10 gal kettle) or my gas stove (for my 5 gal one), if that makes a difference. I feel like top rim of the pot, above the water line, gets hotter than the area down below the water line. I experienced a little melting on one bag touching the top rim of the pot.

I also burned a hole in one bag when I draped it over the pot and it touched the rim of my propane burner stand. Those things stay very hot for a long time! Also, my 10 gal kettle is very wide and short, so off the shelf bags that are wide enough are also way taller than I need. Hopefully I have learned my lesson and my current bags last for many years.

I've been using a bag over a coarse false bottom for years. While it could have been short term culture shock, I really didn't like the times I tried the full mesh basket nor the Spike Solo basket. With the bag, it self-squeezes as it hangs from the rope. It also is a smaller diameter that I can easily drop it into a bucket. Hoisting the baskets out is a little more cumbersome and you would have to get in there with some pressing tool to get the same amount of draining that happens rather naturally in a bag. It's probably more so that I did 50 batches in a bag and only a few in each basket type.
M

I didn’t like emptying or cleaning a basket. Bag is easier to do with less mess on both accounts.
R

I am not sure what people would call my process. I would not call it a BIAB but, others might. I don't think the typical BIAB is for me. It cost more in grains to obtain a good efficiency plus I like to sparge my grains... So, a basket designed like Clawhammer (and others), to me, is a waste which is why I did not buy that unit this past Black Friday. The Clawhammer (and others) has holes on the sides of the basket along with the bottom thus (in my opinion) preventing a productive sparge flow. If you have a system like Grainfather (ugg!) or Unibrau (and others) that has holes only on the bottom, a sparge is more likely to be successful. That being said, I still place a grain bag in my basket to act as a filter while still being able to have a productive sparge.

I am a direct fire propane brewer and I started brewing all grain with the BIAB method. I used the bag once, then got an offer from Amazon to buy a SS basket that just fit my 8 gallon kettle and have used it ever since. The basket and kettle now form the mash tun portion of my kettle RIMS system.

The basket works. Its feet keep the grain off the bottom of the kettle so you and heat it without fear of scorching. It's easier to man-handle than the bag was and it's probably a push when it comes to cleaning.

there are countless ways to slay this beast...whatever works for you is "right" no matter what others may say...

Most "systems" that people have are probably a result of metamorphosis over time...every time you brew you think of something you could do differently to improve your results and make your process easier or more fun.

Most "things" that people add are not needed. It's just personal choice. For BIAB you only need a kettle, a bag and a burner. A spigot? Certainly makes the process easier but not needed. False bottom or basket? Only if you wish to recirc or want to apply heat with the bag in place.

Since I chose to convert from propane burner to "in kettle" electric element...I decided to insert a standard steamer basket into my kettle to hold my bag about an inch off the element. It allows me to use a heat controller to maintain mash temps while I'm away for several hours. I also have a spigot and small pump to recirc while mashing while I'm away at work. I have the basket sides blocked so all the wort flows down thru the grain thus the "dead space" under the bag is all pumped back to the top. The basket also is easier to pull since I just hook the basket handle and hoist. If I pull the bag I can squeeze it like everyone else. If I leave the bag in the basket and pull the basket, I can then sparge the bag while it's inside the basket.

Certainly mine is more than a basic BIAB. It could be much simpler but it works and makes me good beer. It allows me do some things that increases my efficiencies, partially automates some of the process to give some of my time back.

re-read everyone's comments and take a little here and a little there and build "your" system.
OP
A

odie said:
I have the basket sides blocked so all the wort flows down thru the grain
Click to expand...

How do you block the sides of the basket?

I used some 12" aluminum roll flashing I had sitting around. Home depot or Lowes. Any lumber yard. It blocks the side holes and all the wort must flow down thru the grain before getting pumped back to the top.

If you have a basket "made" for BIAB it should be solid walls. I just bought a cheap seafood streamer basket that had holes everywhere because it fit perfect and supports my bag. 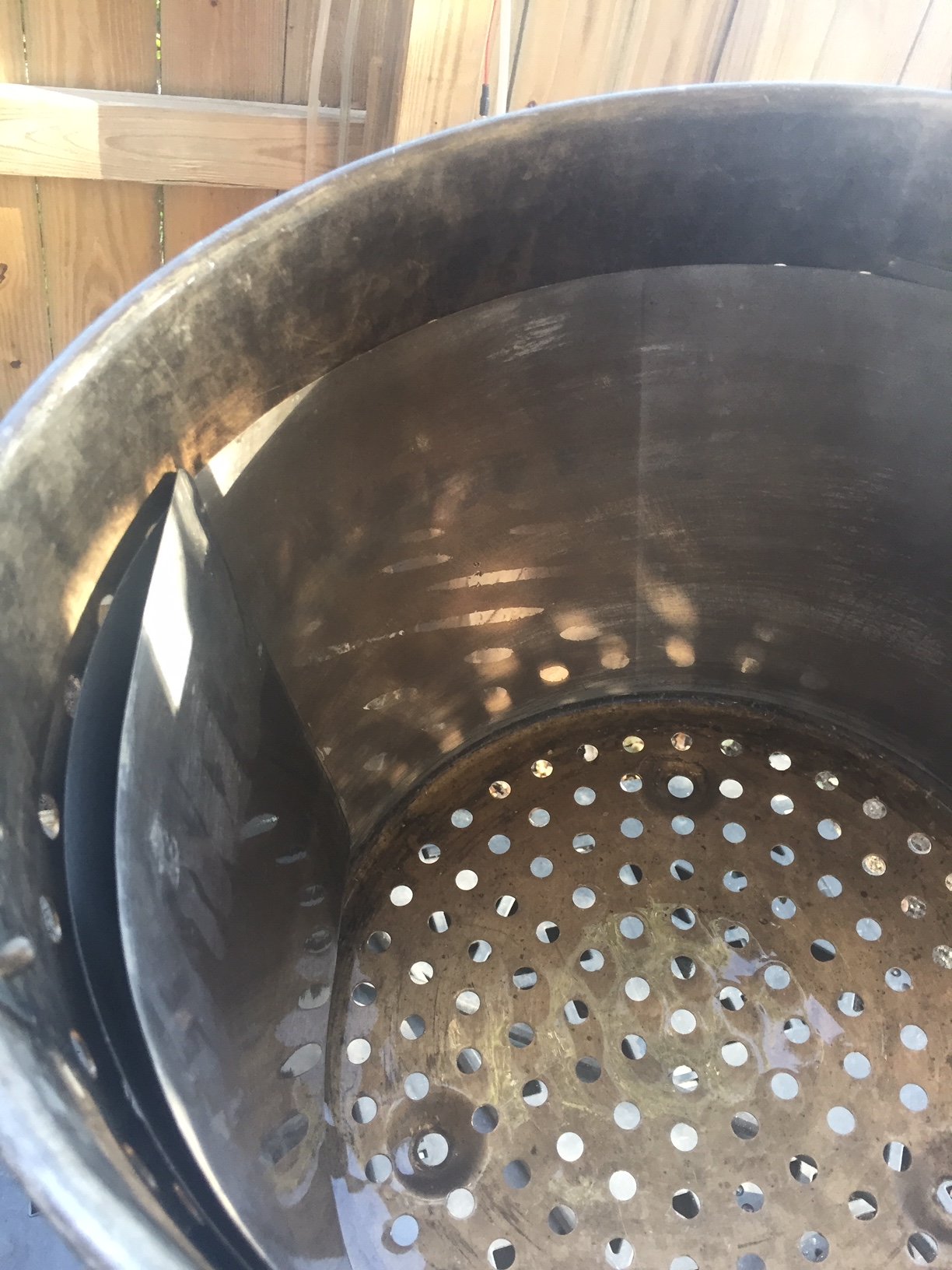 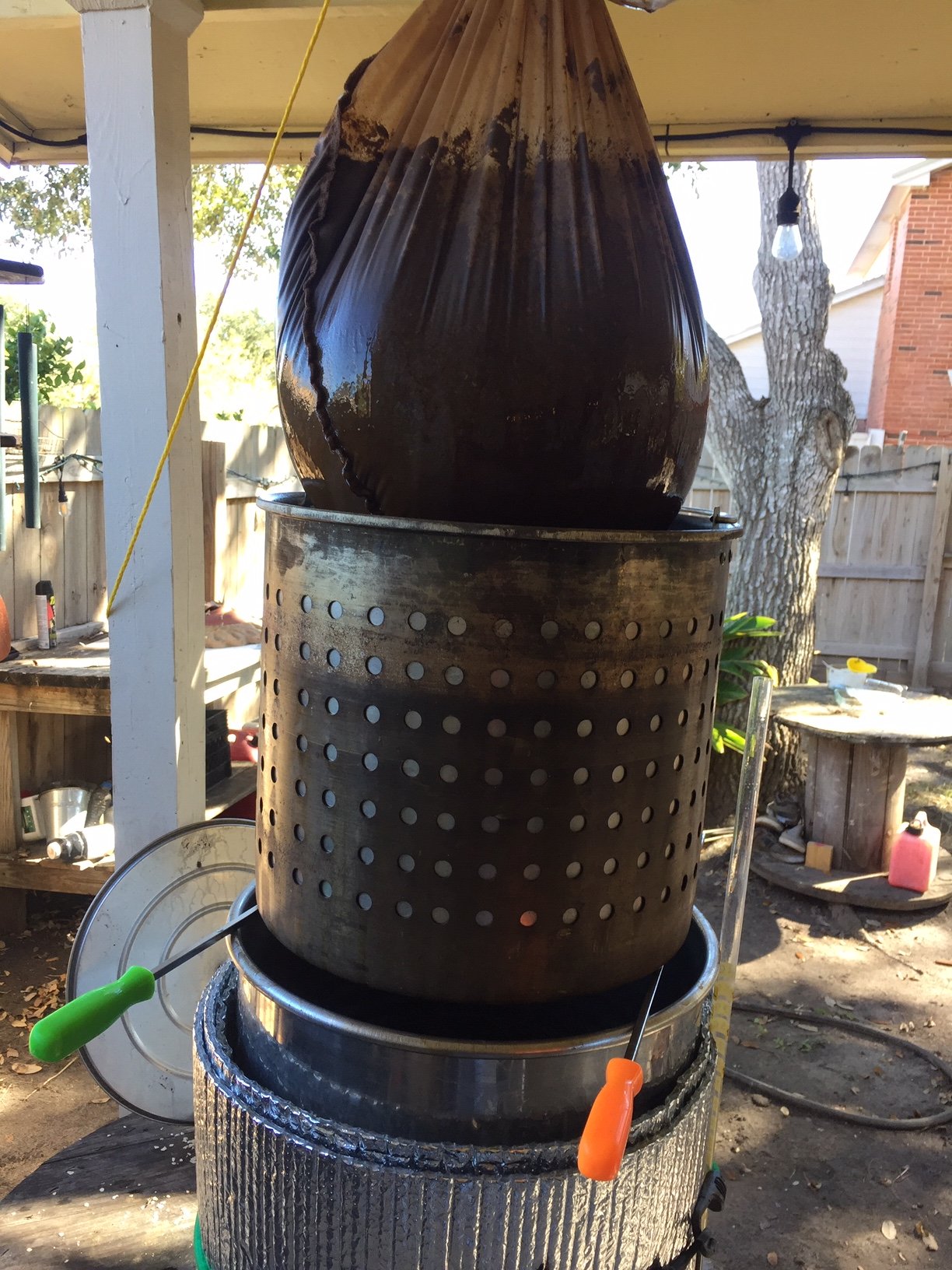 I spent a lot of time planning an eBIAB rig, only to bail on it in the end. The conclusion I came to was that a basket seems cool, but there are some issues with it.

First, as pointed out above, if you have open sides, if you recirculate, some of the water coming it at the top (maybe most/all) will run out the sides instead of flowing all the way through to the bottom. Also, you have additional space around the sides that is wort not in contact with the grains. This can be an issue if space is a concern for high gravity beers.

A bag, however, basically seals itself to the side of the kettle. This means that an recirculation has to go through the grains in the bag. It also eliminates that "wasted" space around the sides of a basket.

Bags are also cheaper and easier to store and efficiency with a squeeze is pretty impressive.

My only issue with bags (and most will say this is not an issue at all), is that you get cloudy wort going into the kettle. This does not mean, in any way, shape or form, that it will affect the ability to brew clear beer. I've brewed crystal clear beer with a bag. I have zero evidence on this, but my switch to a bag coincides with a drop in "sparkle" to my IPAs, so I've been on a mission to have clear wort into the boil kettle. Again, I have zero evidence and I'm not saying that's a goal anyone else should pursue unless they have their own reasons.

I have a basket that I got from Brew Boss on clearance last December, but I have never used it (and probably never will). I thought I wanted it, but (as they say in football) "upon further review", it's not what I want to use.

Wilser BIAB vs The Brew Bag?