Between Brews: Mounting and Motorizing Your Grain Mill

I really, really like my Monster Mill 3+. It is a little heavy to carry around, though, and it feels unstable when sitting on a bucket with a heavy drill motor hanging off the side. I knew that I wanted to make a permanent mounting with a fixed drive for it. That meant that I had to select a suitable motor and platform. Here is how to go about motorizing your grain mill.


The Right Motor For Motorizing Your Grain Mill

The motor must have sufficient torque to keep the mill rollers operating smoothly under load. When motorizing your mill, you need to have it either operate at a relatively low rpm (200 rpm is about right) or have a reduction system added to achieve the correct rate. DC motors can be speed controlled but this adds complexity and reduces available torque. The effective speed of an AC motor can be reduced by sheaves and a belt, or by a gear reduction unit. I didn't want to get involved with fabricating a belt guard so I decided to go with a gear reduction unit.
The simplest thing would be to acquire a motor unit with gear reduction built in. American Ale Works offers just such a motor – and it has 15 ft-lbs of torque. I decided to go with that. NOTE: the mill requires that its shaft rotate clockwise, as observed when facing the end of the mill shaft. This means that the motor shaft must turn counterclockwise as observed when facing the motor shaft. The AAW motor can be wired for rotation in either direction. I rigged a mushroom-style stop switch to provide an emergency stop, though this isn't likely to be needed.

The next step to motorizing my mill was to select a platform. I knew that it had to be sturdy. I wanted it to be large enough to also serve as a grain weighing station. I wanted it to be on wheels for maximum convenience. This is the stage of the project that took the longest. I first considered using a vintage Singer sewing machine stand. That lacked wheels, though, and it had the spindly legs characteristic of the period. I swapped that for the beefy rolling PC stand that I had been using as a table next to the copier. It took up less room in the office, and freed up the PC stand for this project. The PC stand was plenty strong and had wheels plus plenty of room for grain management. It was an open structure, though, and I didn't want grain debris or dust flying around. I decided to instead use a rolling steel cabinet that had been set aside during the office relocation. I wouldn't have purchased this for the purpose, but it was already here and was in the way. I recommend spending some extra time considering this issue, as once you have whacked a large hole in something you probably won't be able to change your mind and put it back to its original use.

My stand had come with a base plate, which made a fine template for locating the mill's mounting holes as well as the opening through which the milled grain was to fall. My trusty old sabre saw made the job of creating that latter opening surprisingly fast and easy. It went right through both the pressed wood top cover and the steel top plate of the cabinet I used. I am going to guess that whatever structure you select won't be any harder to cut. Drill the holes oversized, both to permit fine alignment of the mill and motor, and to permit adjustment of the mill's end gaps.


Mounting your Mill and Motor to the Base

The most critical part of motorizing your mill is next. It will be necessary to mount the mill and motor in such a way that the shafts are nearly perfectly aligned. An unexpected benefit of the three roller mill is that the drive shaft is much higher than on a two roller mill, requiring correspondingly less elevation of the mill to achieve alignment. In my case, it was about 1 1/4”. I had some long strips of 5/8” thick wood left over from something. I cut them to length (a little longer than the mill's width) and glued two together for each end of the mill, then drilled oversized through holes for the mounting. I didn't measure the resulting error but you can see from the symmetry of the coupling after assembly that it must be pretty close. Even with the soft centered spider coupling I used (supplied by American Ale Works with the motor) any significant misalignment would surely cause bushing wear on both the mill and the motor. A square frame would have sealed the base to prevent debris and dust from escaping, but I chose instead to make the two sticks under the mill's end plates structural and to then to just glue in more sticks to close the side gaps. 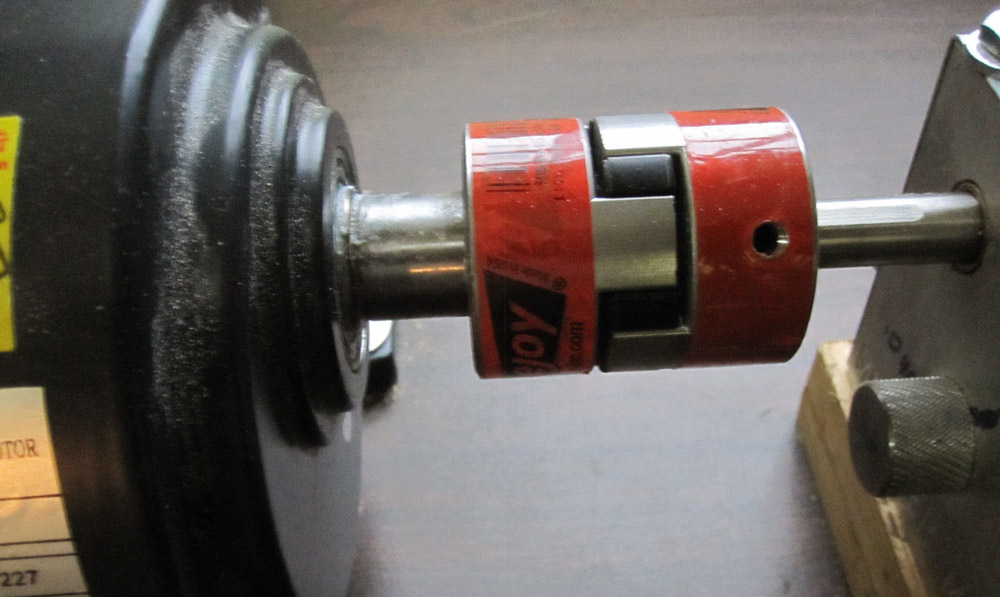 Note that the spacing between the end plates of the mill is critical. If they are too far apart, there will be end play in the rollers and there will be a gap between each roller and the end plate. This gap will permit accumulation of debris and dust, which could jam the roller. Before tightening the mounting screws on both the hopper and the mill itself, make sure the end plates are located as far inward as they will go without any rubbing.
I ran about 8 pounds of grist through the mill as a first test. It took about 90 seconds, which seemed OK to me. I know the mill is running more slowly than when driven by the big drill. Flour was minimal and the crush looked fine (the gap is set to .045). All in all, I am very glad that I finally decided on motorizing my grain mill and getting this project completed. I am sure that it will be a big improvement in convenience.

http://www.johnrcrilly.com/grainmilltest.mp4
Last edited by a moderator: May 1, 2020

https://www.allamericanaleworks.com/shop/
Great write-up! I've been contemplating motorizing my mill ever since I bought it, but just haven't wanted to figure it out for myself. The all-american aleworks kit looks great, Williams Brewing has one too, and I have a vintage sewing machine cabinet that's built like a tank that is dying to become a milling station!
Have any pictures of the actual wiring. Have the same motor just trying to figure out how to wire. I know there is a diagram but an image of how it is all wired into the switch would help me put it all together.
At my old LHBS they had a plastic chute on the undersurface of their mounted mill that you could shove down into your bucket to keep all the dust and flour directed directly into your grain bucket...might be a nice addition to this set up...
Great article; which motor rpm did you go with--there was two to select from at Ale Works?
I agree. In the video it appears that enough grain to be a PITA to clean up is not ending up in the bucket.
So is the mill and coupler passage out of the box ready to use? I just need to connect to my mill once I get it all mounted?
I chose the 180rpm version, though I am very sure that the faster unit would still have plenty of torque.
If you buy the package you will have everything needed to connect to the mill. Just need mounting hardware for the motor and mill, and wiring.
I bought that motor about 18 months ago before he had a connection kit for it. The kit clearly makes it more plug and play. I have mine just wired up to a standard light switch. Cut down some scrap wood to plug the front and back gaps between the mill and the base. I have mine all bolted down to a 2'x2' scrap of corian countertop . That mill and motor make for a very good combination.
In my typical fashion, I recycled some cast offs. I found a 1725 RPM AC Motor for $5.00 at a local junkyard, and had an old wooden school desk that my grandmother had used for a telephone desk. It just so happens that a 5 gallon bucket will fit perfectly between the lower shelf and the second shelf. A light switch and an electrical box, along with an old computer power cord took care of the electrical wiring. The motor had a very small 1.5 inch pulley on it, so I decided to get a 6 inch diameter pulley for the mill, and a bushing so it would fit my Barley Crusher. I cut away part of the top shelf, and mounted the motor and the mill on the second shelf, and used a piece of angle iron left over from my brewstand build to act as a belt guard. Its a little ugly, but works well.
The mill runs about 400 RPMs, which is a little fast, but within acceptable limits.
Great write up, I finally motorized my mill, mounting it to a vintage sewing desk! Williams Brewing Kit worked great for me!
Hi, I have the MM-2Pro SL mill. MM recommends a 1HP motor, (Make sure you have at least a 1 hp electric motor at 1725 rpm or slower) your motor is "only" 0.5HP, Do you find the 0.5HP strong enough and MM recommendation is an "overkill"?
Another option (from a post I saw a long while back here) is adding an 8" round AC duct with a flared edge around the hole. Easily can be screwed on the under side of the base, make it just long enough so an inch or two of the duct goes into the bucket, but not so long that it's a pain to get the bucket in and out. Something like this: https://www.amazon.com/Ideal-Air-Duct-Collar-Inch-Ducting/dp/B00A9UJ35Y with some 8" duct attached.
You must log in or register to reply here.
Share:
Facebook Twitter Reddit Pinterest Tumblr WhatsApp Email Link

K
A Guide to Cleaning your Grain Mill