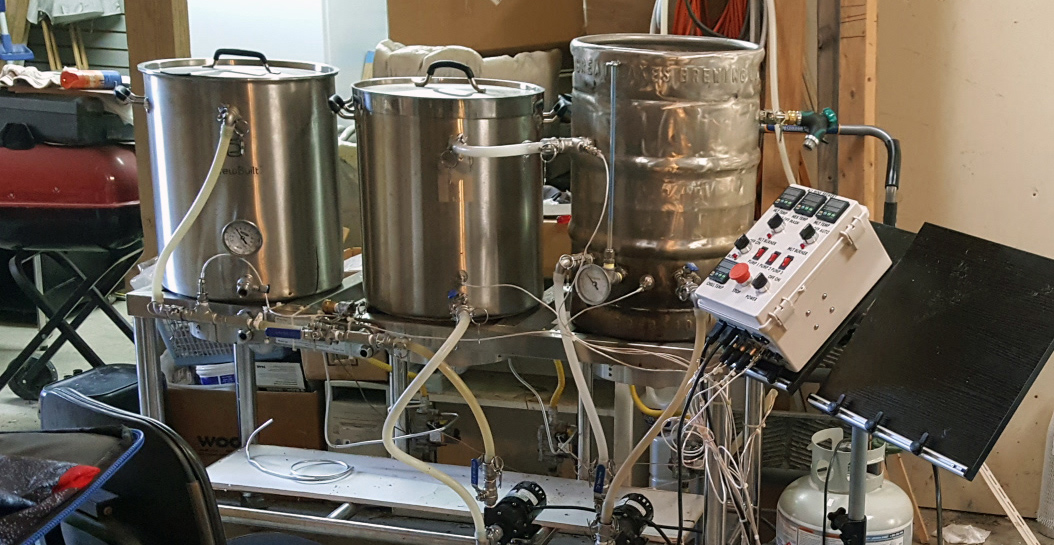 In the first segment I described the necessary plumbing and valves to make low pressure gas (either LP or natural gas) burners electrically controllable. To achieve control, we need to be able to apply 24VAC when we want flame, and to remove the voltage source when we don’t want flame. In this segment I will show various means by which such a system can be controlled and the differences between them.

The simplest possible scheme is a 24VAC transformer and a switch. This can be used when no temperature control is needed; I control my boil burner just this way. In this application, one advantage is that there is no need to go behind the brew stand to light the burner when it is time to get the boil going. If a boil over is imminent, the flame can be quickly and easily killed and relit after a brief pause.
The scheme can also be used when manual temperature control is desired. The flame can be turned on and off as required to regulate kettle or heat exchanger temperature. Because of the liquid volumes involved, system response is sufficiently slow that checking the temperature and responding to it every five minutes or so should be sufficient.

The next level of complexity adds a simple thermostatic controller, such as an STC-1000 or ITC-308. The primary (input) side of the 24VAC transformer is rigged so the controller supplies 120VAC to it when heat is desired. The minimum cycle time should be set to 20 seconds or more to prevent the device from trying to make the gas solenoid chatter. I experimented with this in my HERMS test rig and it worked well enough. It did tend to overshoot by several degrees so I decided to experiment with a proportional, integral, derivative (PID) controller.

A couple of decades ago, designing and implementing a PID would have been far too time-intensive and expensive for a homebrew rig. Today, very effective black box PIDs are available in the $25-$50 range. This makes them quite suitable for our application. I use one to control my HLT burner based on HLT temperature, another to alternatively control my HLT burner based on heat exchanger output temperature, and a third to control my MLT burner based on MLT temperature. That last isn’t a usual feature but I wanted to use it to preheat strike water and also to provide an alternative RIMS mode. In operation, I normally have the HLT burner controlled by the HEX output.
Many prefer the Auber Instruments PID and I wouldn’t argue against it. It appears to be a high quality unit. I selected the MYPIN TA-4 instead because of the price difference (I was buying four of them so it added up). I can report that it does a fine job in this application. Whatever PID you use, you will need to select a version with a relay output rather than the more commonly seen SSR driver. We need on and off control. An appropriate MYPIN model is TA4-RNR and those can easily be found on Amazon.com for $25 or so.
It is also necessary to set the cycle time to a much longer period than is used in SSR-driven electric systems. I found that 180 seconds works well with my 15 gallon kettles. Smaller volumes might respond better to shorter periods. In the MYPIN, the relevant setting is Ctl. You will need to tell the device what kind of temperature sensor is connected (I chose PT100 sensors from Auber). Other settings, such as “heat” mode, should be easy enough to figure out. Once it is configured, you can add water and run the autotune function It will characterize your system and do the rest of the settings for itself. It takes time (an hour or two), and uses fuel (a pound or so?), but once tuned it will operate at peak efficiency (thus saving fuel going forward) and eliminate overshoot. 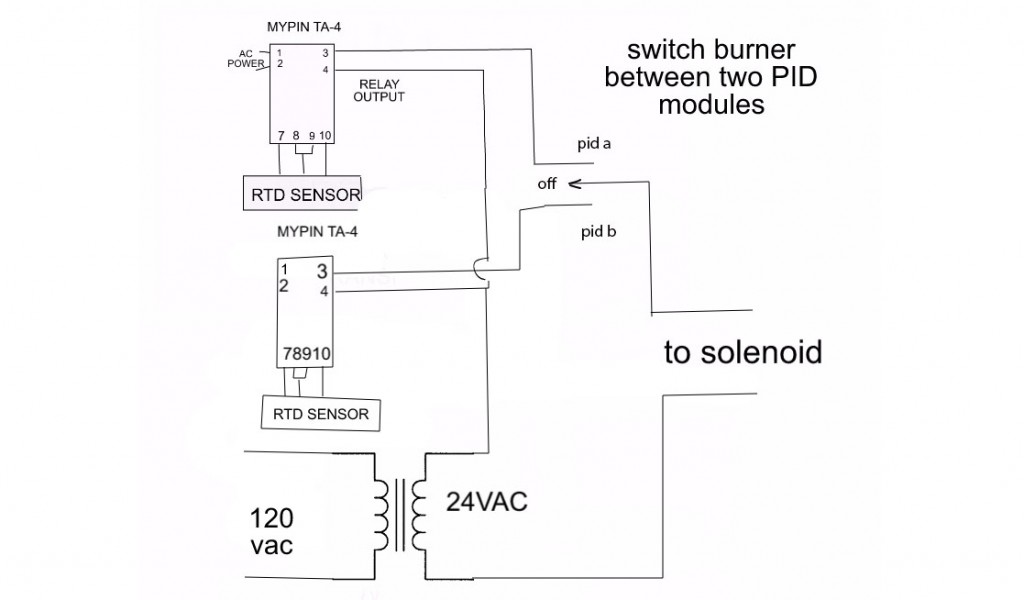 This is all very general. You may use anywhere from one to three (or more) burners. You may wish to switch control of a burner from one controller to another in different stages of a brew session. I do that with a simple center-off SPDT switch, switching the solenoid drive line to either PID (or to nothing) as desired. You may wish to be able to switch a burner between controlled mode and “ON” mode - or to “OFF” mode. I do this with a center-off SPDT switch that connects the solenoid drive line to either the PID relay output or to the 24VAC supply (or to nothing). You can do the same thing without switches by selecting a very high or a very low temperature on the PID so it remains in the desired state. Whatever it is that you would like to do, this should provide a good starting point.

I followed this pretty close. Everything is up and running. I did have a question. When I run autotune at 150°, the PID gets up to temp and holds it well for a while. What would cause it to end up at 153° after the autotune finishes? It did that twice. Is it possible to punch in your PID values?

You can definitely fiddle with the parameters after an autotune if you don't like the way it configures itself. Or you can let it cool 20 degrees or more and run the autotune again. It should overshoot intentionally during the tune procedure and learn from that how to avoid it in the subsequent cycles. Maybe that is all you are seeing. Let the temp drop 20 degrees (or more) and let it run in normal mode; the overshoot may not be there.
Z

Is this the ta4-rnr? And what wires from the temp prob go to which terminals?
Z

And this is for firing a Honeywell valve ? Sorry just trying to get my ducks in a row before ordering
L

Luis
Dear Sir I have copy your design for my brew system with the same Honeywell valves and a Mypin RNR PID. Till now I am working with thermostat relays with NTC sensors, but I am assembling the PID system. Then the questions
1st question
Why not to use the other relay called AL1 (terminal 5-6 at MYpin PID TA4 RNR) for operating ,for example ,the recirculation pump for the mash. With the same PID RNR ,in that case we can control the burner and a pump.
2nd Question
If we use the 3 point switch , Auto- Off - Hand or Manual operation, at Hand pósition we by pass the PID relay, but it still works . Is there any risk for the PID to operate in that way or we must bypass also de PID.
Regards
You must log in or register to reply here.

Aug 21, 2021
BrewBerta
B
M
Making my own electric kettle controller