Not every homebrewer is a die-hard Do-It-Yourselfer. I mean sure, most of us feel the call occasionally – it’s probably the same brain wiring that makes us want to brew beer instead of buying it at the store. But there’s a big difference between screwing a bulkhead into a cooler, and that guy in your homebrew club who welded together a brew sculpture out of old kegs and bike parts so the whole thing looks like something out of Mad Max (and then he named it Mad Max, because the “Max” is for Max-imum efficiency, bro!). Maybe your skills are lacking, or your tool shed isn't equipped to weld a masterpiece. Or maybe you just don’t have room for an awesome homemade setup, but you still want to brew all-grain. If that’s you, you may be eyeing a single vessel brewing system like the Grainfather or PicoBrew, but aren’t sure if they’re a worthwhile investment. This article will hopefully answer some of your questions about the advantages and disadvantages of all-in-one systems and help you decide whether they’re right for you.
Having brewed on both a basic, homemade, single-infusion cooler all-grain system and on a Grainfather, I have some experience with both. After years of brewing on my homemade system, I invested in a Grainfather. I needed an indoor brewing option after my second child was born because it became that much harder for me to leave my wife alone in the house for an entire day of brewing. I still brew on both systems, but there are times when the Grainfather is absolutely an asset to my brewing arsenal.

The Grainfather at fly sparging time, with additional Sparge Water Heater (top).
Simplicity
Both Grainfather and PicoBrew are single vessel brewing systems that offer a quick, easy way to start all-grain brewing with little manual labor and clear directions. This is great for those who don’t have the time or the DIY chops to build their own system, or who just want to be the next Vinnie Cilurzo, not the next Tim "The Tool Man" Taylor. The Grainfather even has a smartphone app that makes brew day easy by storing recipes, calculating strike water and sparge water volume (and temperature), and timing mashes, mash-outs, boil time and boil additions. It doesn’t replace all the software tools I use on brew day, but it does a lot. The PicoBrew Zymatic one-ups this by being automated through a web browser control panel.
Size
If you don’t have a backyard or need an indoor option for any reason, all-in-one systems are compact enough to use without blocking your family’s access to the kitchen (or the kegerator!) and take up less storage space between brew days. The Grainfather’s footprint is about the same as any carboy or fermenting vessel. The PicoBrew Zymatic and soon-to-be-released Pico system fit on a countertop. It’s a great way to get in a brew session even if you need to be inside … such as to watch the kids, or the game.
Integration
Everything in the system is designed to work together. No running off into a kettle only to find that the hole you drilled for your bulkhead is a hair too wide and you’re leaking wort. No concerns that the pump you bought isn’t strong enough to push your wort through the counterflow chiller and up into the fermenter. Brew day is pretty predictable and troubleshooting is simple. However, because it’s all one unit, fixing one component if something ever breaks is likely to be harder (see below). The PicoBrew Zymatic even runs the wort off into a keg for you for fermentation and packaging in the same keg; some brewers will probably find this a bit too hands-off, but for others, it may be just what the brewmaster ordered.
Versatility
Because the system is electric and directly heated, you can employ brewing techniques that aren’t always easy on a basic 2 or 3-vessel infusion system. Mashes stay at target temperatures. Step mashes and mash-outs are a breeze – no more calculating how many quarts of boiling water to add, only to panic when you overshoot your target. The Grainfather is also built for fly sparging, with a grain basket that lifts out of the mash easily and safely, though you’ll still need an additional vessel for heating sparge water (see below). The Grainfather is also more manual than the PicoBrew, so it’s easy to draw off part of a mash for decoction or draw off wort to caramelize in a separate pot for something like a wee heavy. Of course you’ll need additional pots for this and have to do it on the kitchen stove, but since the Grainfather sits comfortably in the kitchen you can keep an eye on it easily while you’re doing this.

Price
The Grainfather retails for about $900 USD, and you’ll still need an additional vessel for heating sparge water. Grainfather offers an electric one for $170 USD that works great, but any pot that holds around 4 gallons (15-16 liters) will do. The PicoBrew Zymatic retails for over twice as much – around $2000 USD – but it’s much more automated, if that’s what you’re looking for.
Proprietary Components
As noted above, everything is designed to work together, and that is a good thing. But it can also be a drawback because if something breaks on the unit, it will be much harder to fix than just replacing one component you picked up at your local homebrew store. However, the Grainfather is open-ended enough to be modified in small ways. I added a hop spider to mine because the hop screen on the pump intake gets clogged easily (not just on aggressively hopped IPAs, we’re talking dry stouts as well) but a hop spider is cheap and easy to make even for a DIY newbie like me. And I don’t think it will be hard to replace the Grainfather’s rather lightweight counter-flow chiller with a hardier version or a plate chiller someday. 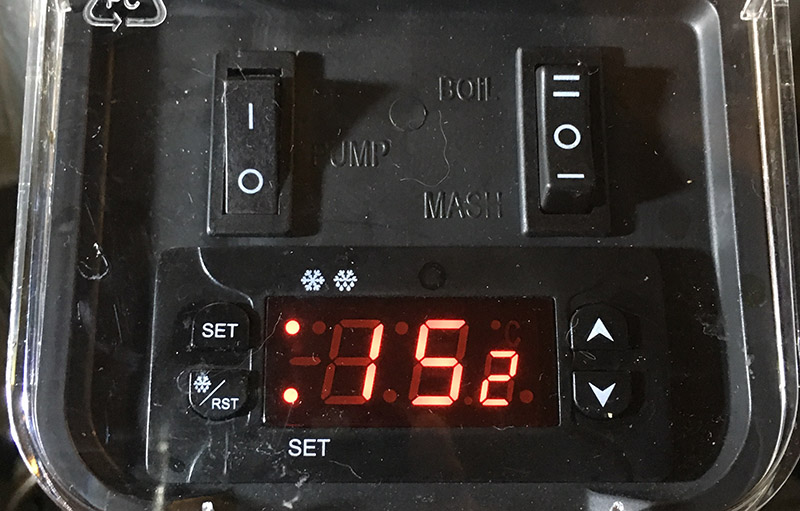 Batch Size
The Grainfather is designed for 5-6 gallon (19-23 liter) batches and the grain basket can comfortably hold 20 pounds (9 kg) of grain, so it should have no trouble making most 5-gallon worts even upwards of 1.090 OG. If you want to brew larger batches, the Grainfather is not for you; and if you’re in the mood for a barleywine or quad you may have to scale the batch size down a little bit. In this department, though, the Grainfather has a clear advantage over the PicoBrew Zymatic which brews only 2.5 gallons (9.5 liters), or the Pico system which will be even smaller.

Boil Vigor
I include this one because I’ve seen a lot of questions on the Internet about the Grainfather’s ability to bring 7-8 gallons (27-30 liters) of pre-boil wort to a rolling boil, especially in the United States where our 110V AC circuits cap the unit’s maximum wattage below what it gets in its native New Zealand. It’s true that the boil doesn’t roll and roar like a malty Mount Vesuvius, so if you’re looking for that kind of excitement you may be disappointed. But from my experience, this has not caused problems in my finished beer. I reach a boil in about 15 minutes after sparging, my hot breaks are impressive, my boil-offs hit my OG target, and I have great hop utilization and no DMS. The PicoBrew, on the other hand, does not even reach a boil – operating just below boiling point, though hot enough to isomerize hop alpha acids.
Bragging Rights
Okay, you don’t have the pride of showing your friends your homebrew setup and saying “I built that.” But if you’re the kind of person for whom DIY projects are stressful or unfeasible, you’ll be happy just to be brewing good beer. And isn’t that why we do it? 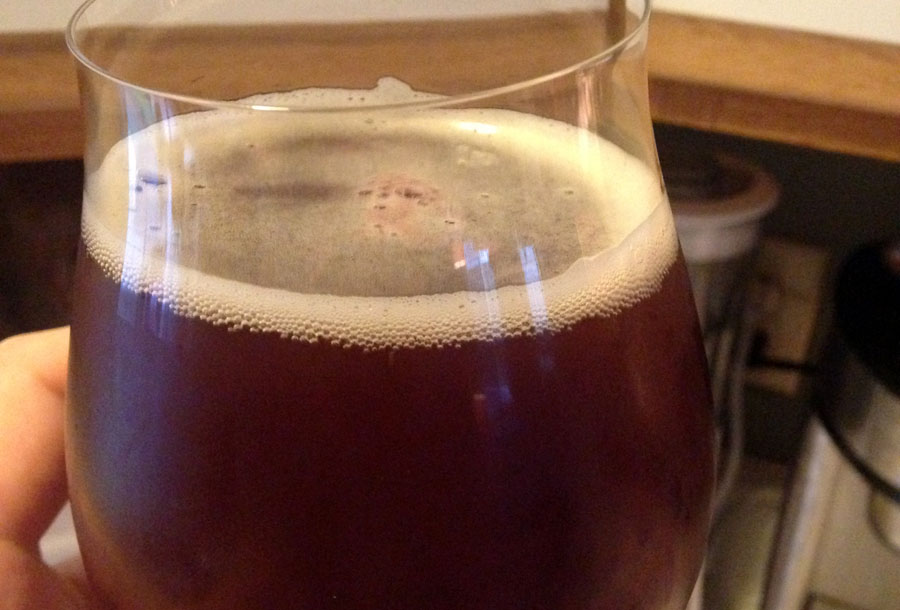 No matter what you use to brew, the most important thing is that you enjoy the final product.
In general, single vessel brewing systems like the Grainfather and PicoBrew make good beer, and they offer a worthy alternative for the homebrewer who wants to brew all-grain but can’t or won’t go a more traditional route. That convenience comes at a cost, and depending on the option you choose you may also sacrifice some of the hands-on aspects of homebrewing. But as with almost everything in homebrewing – where there are at least two ways to do everything – there is no real right or wrong, only trade-offs and factors to consider in pursuit of the one goal all homebrewers have in common: the goal to brew a great glass of beer.
Shawn is the writer behind the blog " My Brew Home " , where you can find his latest recipes and brewing adventures. 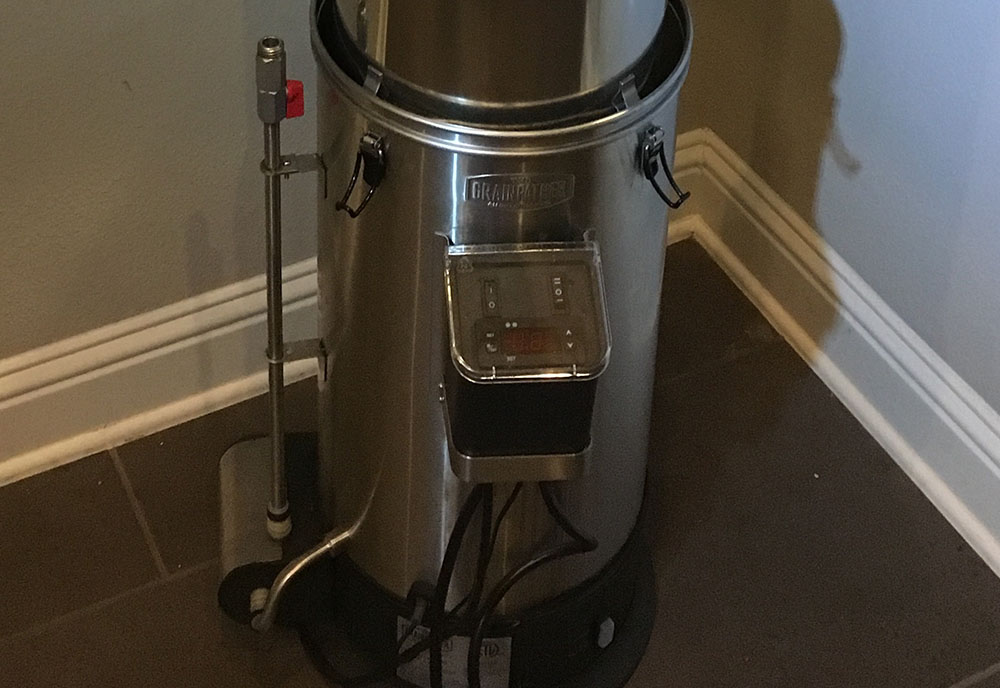