So I have brewed about 5 batches with my father in law. 1 all extract, and 4 all grain. However I want to branch out and do my own. I am looking at getting equipment, to hopefully start with 2 1/2 , and hopefully transition to 5 gallons, after I have nailed down the process by myself.

I want to start with all extract, and then do extract + specialty grains (not very interested in doing ALL grain at the moment).

I looked at a previous post regarding equipment for starting brewers,

However there are other options i have seen online, such as


so , are there any other suggestions out there ?, or should I stick to the previously suggested kit from
https://www.morebeer.com/products/deluxe-fermonster-homebrew-starter-kit.html ?

Would you recommend starting with 2 1/2 gallons vs 5 gallons?
If I go for 2 1/2 gallons, would the 6 gallon fermenters work well, or do I have to get a Kit dedicated to small batches ?

Most of the gear to do 5 gallon batches will still do 2.5 batches. The time to brew is about the same. The real question is how fast will you go thru a five gallon batch. Most of us will admit that 5 gallons goes fast. The only advantage to the smaller batches is the space required for the storage of pots ect. I would consider the smaller batches only if I didnt have the space. The steeping of specailty grains is so easy there is no reason not to do it. It allows a huge amount of different beers that you can brew. All grain did scare me for over a year but now I have tamed that beast and most of my brews are pretty good.

There are plenty of opinions on starting equipment. It is always hard to suggest things without knowing your level of interest and budget but I will try.
One thing for certain is that the time invested will be the same between a 2.5 gallon, 5 gallon, or 10 gallon brew day.

The 5 gallon kettle will never work for 5 gallon batches. Start with something similar to this:
https://www.amazon.com/dp/B00WJ0E6A4/?tag=skimlinks_replacement-20
30qt will work for 5 gallons, just watch it. You need an outdoor propane burner for 5 gallon boils.
Now get a kit that substitutes the boil kettle for an immersion coil.
You need cleaning equipment, cooling equipment , fermenting equipment, hydrometer, siphon/transfer equipment, and bottle equipment.
Last edited by a moderator: Oct 23, 2018

I know you said you are not interested in All Grain, but I am still going to try and sell you. I am right at my 1 yr anniversary of brewing. Last year at this time, my Mother-in-love called me up and asked me what I wanted for Christmas. My work buddy had just set down a Midwest Supplies catalog on my desk and I had been going through it. I replied to her, I want a home brewing starter kit, I replied. 3 days later the kit was on my door step, came with everything I need including a bottle caps, caper and the first recipe kit. I was told not to open it till Christmas, but what the heck, I brewed my first batch that weekend and had it in the bottles by Christmas.

I finally got out of the "I made it" phase and started saying to myself, "Self, this kind of taste like crap. What is the strange finishing taste?" Ok, to be honest I didn't know what finishing taste was, but I can use it now. The weird "twang" at the end got me searching the web and that is how I stumbled upon HBT, and I found out about the extract "Twang". I cracked up a bottle of LME I had for the next kit, stuck my finger in and grabbed a taste. That taste was what I was tasting in my beer, yuck!

Hold on now, all the expert Extract beer brewers are going to jump into the story now and proclaim you can make fantastic beer with extracts and I am sure in their world that is correct, but not in mine.

I found out about BIAB, bought the stuff I needed, converted my last two extract kits into all grain and have been making great beer every since. Had I not switched, I would be out of the hobby by now. Remember I said had I not switched.

BIAB is no more difficult than extract and requires only one thing more, a bag. You have 5 batches under your belt now, go for it.

In all honesty, if I was giving advice to someone starting out, I would tell them brew a few batches with someone who is already brewing (which you have) and then go straight into BIAB, don't waste the time on the extract, there is a world of difference.

Thank you all for the info. It was really helpful. I think Im going ahead with the previosuly suggested set up, and im going to get the suggested propane burner. As for the brewing itslef, I am goign to go ahead and start with an all extract (the one that comes with the kit), then do an Extract+ Specialty grain, and then I will go full on with BIAB. (TorMag did a good job at persuading me; lot of good points made)

Thanks all for the suggestions

If you are getting a burner separate from your kettle you may want to look into low pressure burners (banjo burners).
They have better flame control, do not go out as easy, and are quieter; they do cost a little more.
G

I use the Bayou Classic 44qt kettle with steam basket. If you plan on eventually going with 5 gallon BIAB batches, I highly recommend not going any smaller than the 44qt. The steam basket works so well with BIAB. You might be able to find this kettle with ball valve and thermometer. Mine doesn't have either, but I have purchased them and plan on adding them with some weldless fittings soon.

I've attached a picture of my kettle in some glorious BIAB action. 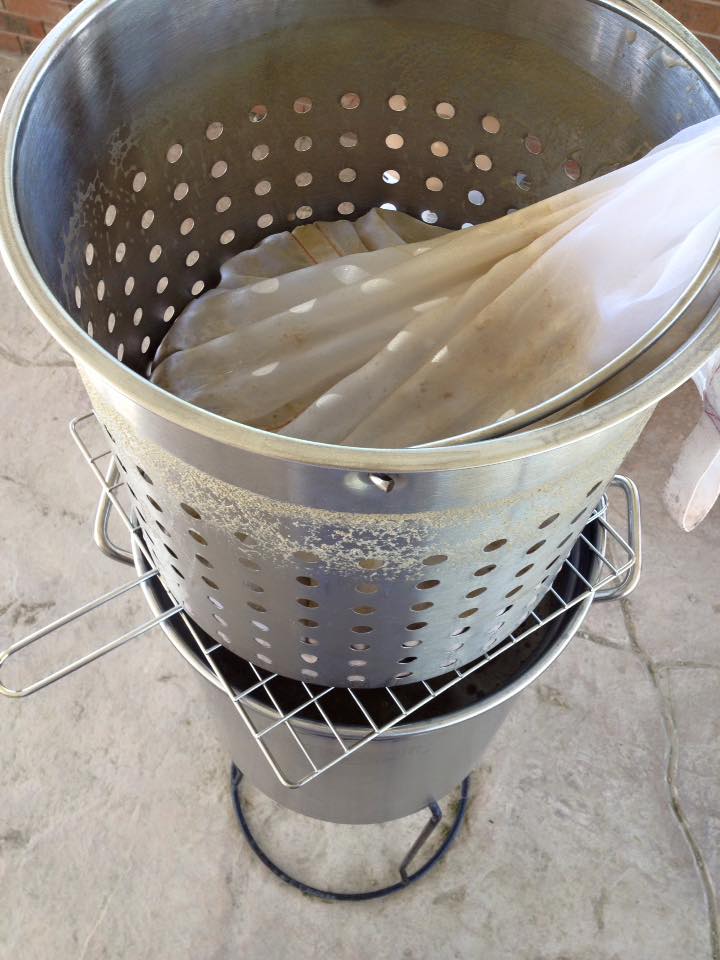 I have to agree with Gtslate. Kettle is really important. I am on my third now, wish I had made the right choice the second time (first came with my starter kit, so it does not count). The question you really have to ask you self is what batch size are you going to SETTLE on? For me is was 5 gallons, after my first batch of bottling, I hated bottling so much I swore never to do it again. So I moved directly into kegging, and of course that goes to 5 gallon batches.

The second question you have to ask yourself regarding kettle size is what types of beer do you plan on brewing. If you are going to be brewing big beers (large grain bills) then you will need a bigger kettle.

I like some big beers so I ended up settling on a 64 quart Bayou Classic with a ball valve.

My advice, try to get the right, long term kettle up front. You can always brew a smaller batch in a bigger kettle, but you can brew a larger batch in a small kettle. (tm)
You must log in or register to reply here.
Share:
Facebook Twitter Reddit Pinterest Tumblr WhatsApp Email Link

Equipment for a beginner