Hello everyone, I recently noticed a metallic taste in my kegged beer. For good measure i took apart my beer faucet with ball lock disconnect and noticed that there what looks like rust has appeared inside the faucet. I soaked and cleaned with PBW but it looks like it is still there. What does it look like and how can i fix it? THe reason i got this one was for the convenience and not having to deal with a picnic tap. Any suggestions or anyone know of a good beer faucet with ball lock disconnect?

MY pH LOVES TO MASH

You can buy faucets separate from the hoses and disconnects as they are interchangeable. What brand is that? I would recommend going with perlick ss faucets. I now own two of them and have not had that experience.

Below is a pic of the 630ss a great faucet. I've linked the picture to morebeer but you can get them at a lot of brew supply shops. 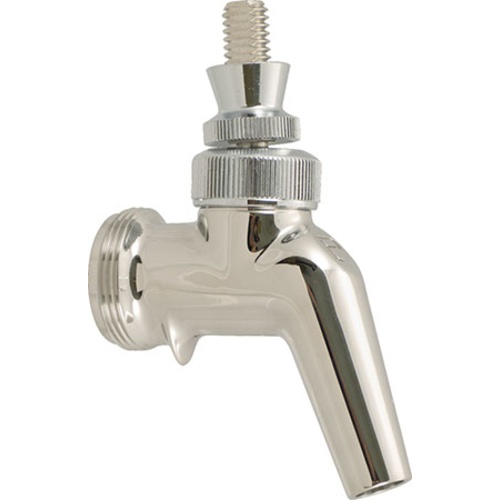 The rust appears in the smaller piece, i think its called a beer shank? Are these interchangeable as well?

MY pH LOVES TO MASH

As far as I know it should be interchangeable as well.

Edit: there can be some difference in threads between us and European shanks.

Interesting! Ss can rust. But do you know if it's SS or not?
I had the chrome come off my first faucet fairly quickly and show the brass underneath. That got replaced.

Is the corrosion in the faucet or the shank? I know my ss faucets are pristine after about 4 years but I cheaped out and got plated brass shanks which have long ago lost their plating on the inside. When I take the faucets off for cleaning I can see that the inside of the shank is an orangey almost copper looking material now. I assume it’s brass that’s oxidized. I don’t know that it’s affected flavor though?

^Right^, it's not rust, it's brass base metal showing now that the chrome has entirely flaked away.
Which means that shank was not stainless steel...

I've always bought stainless shanks and faucets (Perlick for beers on CO2). Never had an issue. IMO, If you try to go cheap, you're just setting yourself up to spend more later on down the road. The stout faucets I have are also stainless steel ($75 each) but I wouldn't get anything else. I'm actually looking at getting another of those, since three (or half of my faucets) just isn't enough.

Most faucets and shanks are interchangeable. But, I had an issue with my older Perlick faucets not mating properly to the newer shanks. Easy fix since I had the original shanks that DID mate properly. IMO, if you get shanks and faucets at the same time (or same generation) then you'll be fine.
M

When I bought my house a previous owner built a cheap kegerator into the bar which had a chrome faucet. I made the mistake of running a beer through which always had a metallic taste. I opened it up to clean it and sure enough the brass was exposed. It's not a huge deal if you blast through a keg in one shot or don't mind dumping a pint before drinking a pint every day you want a beer Otherwise replace the the chrome parts. The shank certainly needs a replacement but there's a good chance the inside of the tap assembly has the same issue. I would replace the entire tap assembly with stainless steel.
You must log in or register to reply here.
Share:
Facebook Twitter Reddit Pinterest Tumblr WhatsApp Email Link