I opted to not put this in the DIY section, because not a whole lot was done by me. However, this full bar and brew room build was a LONG time in the making (probably longer to research than build), and with it finally done I thought I'd share. This was essentially the finishing of 2/3 of our unfinished basement, with general contractors doing the overall build (electrical, walls, etc.), while I took care of "only" the wooden wall planks, the bar top creation, and the tap wall. The brewing area remained in the unfinished/storage area, while the rest of the basement was turned into half full bar, half lounging and movie area.

Brewery (last two pics)
My previous brewing area was on the other side of the new, far wall in the first picture. The new space kind of looks to be a jumbled mess (especially the sink/hose area) compared to most people's shiny brew spaces, but this is much better than it was: better optimized for vertical storage, items in intuitive locations, etc. I have plans to further optimize once I've got more brew sessions under my belt in it, but so far am ecstatic with it.
All in all, after 5 or so batches in the new brewing area, it operates amazingly well. The air temp rises only a few degree (likely due to the dehumidifier), and you don't smell anything in the rest of the house unless the door to the brewery is opened. There were only two things I overlooked in the whole thing: I forgot to tell the plumber to plumb the utility tub with unsoftened supply, so I have to go over to the bar to prep tap water. And, of course, I would have liked at least two more 110V outlets. 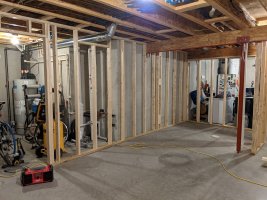 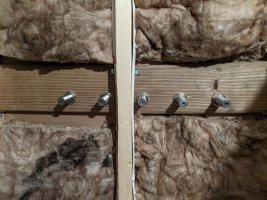 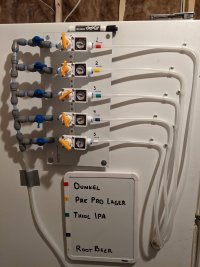 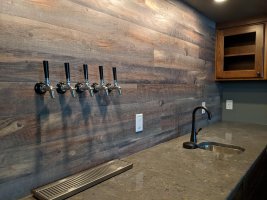 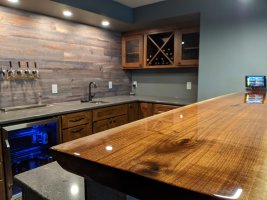 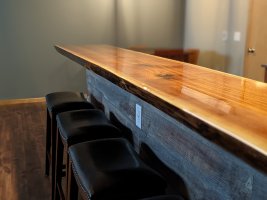 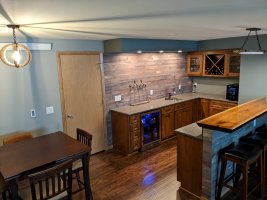 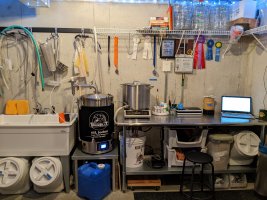 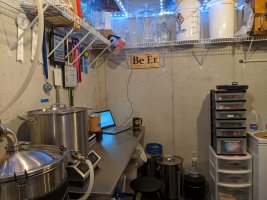 Very nice, way to go yet with my beer engine bar, notice your condenser transverse appears quite horizontal, I have mine attached to lid a little loosed so it has more of a slope, it stops the steam that condenses pre spray from running back in. 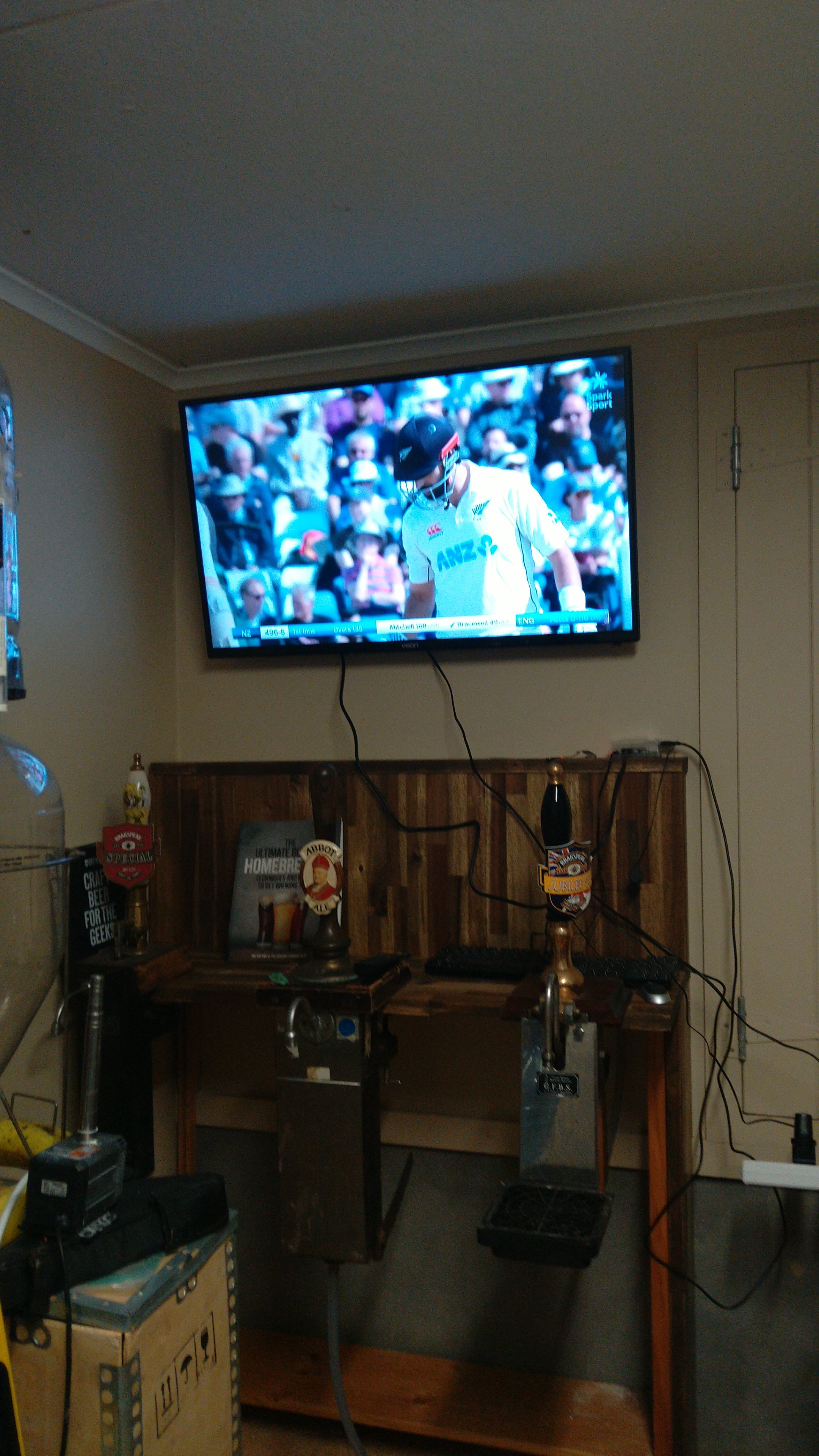 DuncB said:
it stops the steam that condenses pre spray from running back in.
Click to expand...

Yeah, I paid close attention to this before I bought it. It's the Steam Slayer from @Bobby_M at Brewhardware - he noted that, unlike others, the spray head is oriented below the horizontal, so there's no chance of water going back into the kettle if not down-sloped.

I've seriously considered an engine or hand pump. I think next on the list, though, when I'm not so far in the red, is a Czech side-pull faucet.
D

@cactusgarrett
Czech side pull is on my shopping list when I go back to the UK next week and will go on the back side of my keg fridge next to the nitro stout tap.

My comment is really not about the spray aspect getting back in which I know has been an issue with some condenser designs.
I cut a viewing / dry hop / additions hole in my lid and so can look into the kettle etc. This has allowed me to see that some of the steam condenses in the transverse limb because it is cooler there and so can run back into the kettle if horizontal, I see this with the drips falling back down into the boil. I don't think it causes problems because DMS is more volatile than water but having the slight tilt does greatly reduce this happening. I also cover the top lid with a towel and wrap the first vertical and the horizontal component of the condenser to reduce heat loss at these sites and this encourages more steam to reach the sprayer site and condense there and less to condense on the lid and other parts.
OP
OP

I did fashion a jig to support the assembly, since the weight puts a lot of torque on the TC port in the center distillation lid. The jig supports the assembly's weight onto the outer rim of the lid. I did have it initially pitch slightly downward to remove the condensate, but I'll take a look at the pitch, again, next time I brew since it's now in its permanent home. 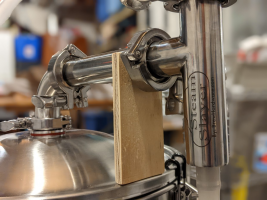 @cactusgarrett
Remember seeing your bracket, on the condenser thread I think.
Worth cutting a hole either for a TC port to hop / add stuff through and to keep an eye on the boil.
I just cut a hole and fitted a preserving jar lid into it much cheaper option, but my lid not as domed as yours. 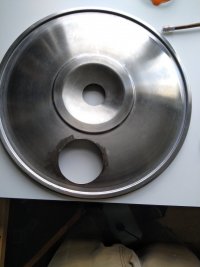 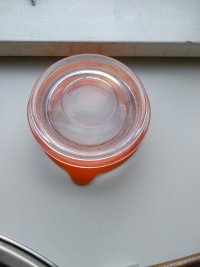 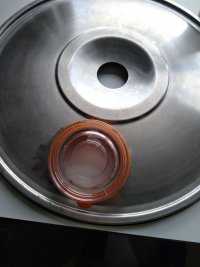 Master Of My Domain

DuncB said:
Remember seeing your bracket, on the condenser thread I think.
Click to expand...

So it turned out that the pitch was exactly horizontal. I sanded it a bit to make it downslope a bit.

Funny thing: don't know if adjusting the pitch of the condenser did this, but this batch seemed to be running hotter than the previous ones during the boil and I ended up boiling off nearly twice what I usually do. I could tell right away something was different, as the condenser output water was hotter than usual, (it was steaming when it normally doesn't, and was uncomfortable to the touch). I don't know why this happened; I even lowered the boil power below what it normally is. Time to adjust my spreadsheet numbers, I guess.