Alright this is gonna sound crazy but I'm calling it SCIENCE.

So heres the set up. I have a vintage best by 2014 Mr. Beer American Pilsner extract can. I am gonna brew it but I don't really like Pilsners so my question is. What should I try to add to it to make it more of a dark beer or stout??? Are there any extracts ingredients for Dunkels or Wiess or Hefewiesen??? I am thinking about adding some Munich LME to it??? Any Thoughts??? Probably will be using Champagne yeast Lalvin EC-1118 and some older Lavlin K1-V1116. Then theres the stuff thats under the cap of the extract can... I'm not sure how well it is. The others been in the fridge so they should be good. Anyways thoughts and ideals would be appreciated.

Very recently, in the last few months, there was at least one other thread started about using old extract kits for the 'science' of it.

That said. Sure, steeping grains of all sorts. Cara-anything or crystal. Brown malt, roasted barley, chocolates, black malt, etc. Stuff that doesn't need to be mashed.

Reading this thread should lower your expectations so that disappointment is a high.

Long time no talk guys. someone gave me this kit. Had it sitting round his garage. Figured WTH.
www.homebrewtalk.com

This will hammer it home nicely

I made a nice pseudo lager with Kveik. Saved a ton of yeast. Days later found a 10 year old Mr. Beer kit in my late father m’s things. Brought it home then decided- what the hell I’ll make one. Made Canadian Ale a pre-hopped basc low abv brew with a corn sugar booster. After a 5 min boil, and...
www.homebrewtalk.com
OP
E

I am wanting to ad flavor also.
D

Why not just add the flavors in the glass after it has brewed then you'll get a choice, vanilla, chocolate, extra hops.
R

A new can of Mr. Beer American Pilsner has a retail value of about $20. This may sound crazy but with the previous people's experience with old Mr. Beer kits the best thing may be to throw this old one out and start with fresh ingredients.
D

@RM-MN
I've think just keep it on the shelf and use in case of emergency. ie if you have to break glass throw it through the window.

@DuncB: This may be the quote that will quickly move future discussions from "crazy ... SCIENCE" to "cooking with stale ingredients":


bwible said:
I’ve used outdated LME a bunch of times. But I always use it in a beer where it will be covered up, so to speak. Stouts and Porters - dark beers with lots of roasted grain. RIS. Coffee Stout. Texas Brown Ale. As additional gravity to bump a mash to make a barleywine. Most of the time, these turn out surprisingly well.
Click to expand...

It's likely that others have made similar observations in recent threads.
J

Idk I’m just a new brewer with only 5 brews under his belt. So take me with a grain of salt. But do something crazy with it. Like some strange ingredients you always wanted to try. That way if it’s even ok you might be onto something. If it sucks just toss it as that’s what people were recommending anyway. Just go nuts like you stole it and it didn’t matter.
J

Also as someone already mentioned topping off a big beer or in a partial mash might be great. Throw it in a dark ipa as a partial. Lot of hops won’t even notice anything after that.

I don't think there could be a bigger waste of time or fuel. If it had a best by 2024 it would already taste like garbage.

Bobby_M said:
If it had a best by 2024 it would already taste like garbage.
Click to expand...

EccentricInTexas said:
So heres the set up. I have a vintage best by 2014 Mr. Beer American Pilsner extract can. I am gonna brew it but I don't really like Pilsners so my question is. What should I try to add to it to make it more of a dark beer or stout??? Are there any extracts ingredients for Dunkels or Wiess or Hefewiesen???
Click to expand...

Your can will have undergone a lot of maillard reaction by this time. Supposing there is no risk of metal contamination or botulinum, you already have an extract which is "good" for a dark beer, Belgian style, and you don't need to add candi sugar, even.

I don't know what the taste of it would be but I would brew it and, if it doesn't work, you can either use it as a wasp trap, or distill it, or water the flowers, or give it as a gift to your mother-in-law. There is always another use.

Birrofilo said:
Your can will have undergone a lot of maillard reaction by this time.
Click to expand...

Yup - one of the flavors to cover over when cooking with stale LME.

Nothing crazy, nothing science-y, just cooking with stale ingredients.

If it comes out really good, it's a one-off.

If it doesn't, one has nothing tangible for their time and effort.

Bobby_M said:
If it had a best by 2024 it would already taste like garbage.
Click to expand...

Back in #9, I brought forward an idea (from a different brewer) that ADVANCES THE TOPIC on how to brew with stale ingredients.

If you have something that advances the topics of brewing with stale ingredients (or, for that matter, brewing with extract that has a "best by 2024" date), it's likely that people are willing to listen.

Sometimes the question is moot on its own merit.

BrewnWKopperKat said:
Obviously. Me too.

Back in #9, I brought forward an idea (from a different brewer) that ADVANCES THE TOPIC on how to brew with stale ingredients.

If you have something that advances the topics of brewing with stale ingredients (or, for that matter, brewing with extract that has a "best by 2024" date), it's likely that people are willing to listen.
Click to expand...

I certainly could have been less flippant in my wording because I'm actually serious. Homebrewers have had a hard enough time proving that "homebrew" isn't some retched concoction. It's also hard enough to make a good beer with all the freshest ingredients. Of course I think you can brew decent beer with fresh LME but I was being hyperbolic and making a dig on the relative quality of Mr. Beer LME.

Not all questions deserve an answer that is perfectly lined up with expectations. Some questions fail merit on their own so it's reasonable to answer "how do I?" with "don't".

I'll modify my response this way. If you brew with 7 year old LME and you find the resulting beer to be the least bit palatable, our expectations of quality are so far apart that I don't have anything else to say. At the very least, don't share it with anyone without explicitly explaining that you didn't expect it to be any good and why.

Personally, I think it's more efficient to discard the old, stale, LME. Others, in other topics, have mentioned effective ways to make good use of the stale LME.

I'll make a first attempt at summarizing this idea (making good use of stale LME).

Cooking with stale ingredients is about
1) knowing those ingredients are safe to consume, and then
2) covering up the "off" flavors.

Two episodes of Basic Brewing Radio will help identify the off flavors that need to be covered up:
Ideas for covering up those off flavors can be found here

BrewnWKopperKat said:
@DuncB: This may be the quote that will quickly move future discussions from "crazy ... SCIENCE" to "cooking with stale ingredients":

It's likely that others have made similar observations in recent threads.
Click to expand...

Wow, thanks for quoting me! Yes, I am frugal and whenever I wound up with an outdated can of extract it was because my wife or a family member or friend who didn’t know better bought it for me for Christmas or as a gift. I know it’s not their fault, they are not brewers, they don’t understand this stuff and they don’t know any better. I haven’t wanted to offend anyone. I’m glad they thought of me and what I like to do. But eventually I’ve had to explain why some the beers didn’t turn out well, so everybody who would buy me a gift knows now.

So I had a little run where I had a few old cans to use up and get rid of. I also used to own a homebrew shop that I closed in 2004, had some cans and kits laying for awhile from that, too.

All of those are gone now, and I am definitely in the place now where I will say its better to throw away old extract than it is to dump beer made with old extract.

Like somebody said earlier, it’s the same as cooking with old ingredients. Would you open and eat a can of soup from 2004 you found in the back of your cabinet?

I’m mostly an all grain brewer. The occasional extract batch reminds me of how easy it can be. But I won’t be using any more old extract.

For the record, one of the best ones I did was a barleywine where I used a can to supplement a grain mash and then aged it on wood chips soaked in bourbon. Barelywines and aged old ales are supposed to have a little oxidation and the wood covered up much. Think Backwoods Bastard.
Last edited: Jul 7, 2021
R

Malt for the next time you need a big ass starter. Cold crash and decant with a heavy hand. 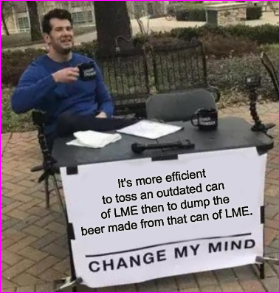 W
I know this is probably crazy, but..

Will it be alright?

I'm shootin' for a Porter, does this sound about right?

This is embarrassing and dumb...but I'm asking anyway