So I am going to be brewing an Allagash White clone today from the following recipe:


It says "secret spice" at the end there and I am not sure what I should go with. I'm not familiar with anise and I don't think I want to do pepper or cinnamon. I was thinking of vanilla but I have only seen vanilla in liquid form so what is a pinch of that? I am also just thinking of skipping the spice all together just to get a solid belgian white ale. What do you guys think?
B

It's been quite a while since I had that beer...I think you could just skip the secret spice too. On a related note, I used some chamomile tea in my last wit per JZs suggestion in his style profile in BYO and it added a nice apple/fruity element to the flavor.

On the same note, JZ recommends 1 oz of fresh orange zest for the citrus character. I have used this a couple of times in my wits and it gives a nicer aroma and more orangey taste.
B

noisy123 said:
On the same note, JZ recommends 1 oz of fresh orange zest for the citrus character. I have used this a couple of times in my wits and it gives a nicer aroma and more orangey taste.
Click to expand...

indeed...I went with a suggestion from a fellow brewer to use a variety of citrus zest and it's mighty tasty.

In my Wit (recipe in my dropdown) I use:

I have heard some folks like to use a little pinch of black pepper and/or cumin. Personally, I think those belong in a Saison, not a Wit, if I wanted my Wit to taste like a Saison I would just do a Saison.

Cool thanks guys. I think this time around I might just skipthe secret spice and brew it as posted. But I am hoping this is going to be a beer I want to make again and again so next time around I might use some fresh zest to give it a nice fruity taste. Thanks for the input.

Anise: Think liquorice. Not for everyone.

HighPlainsDrifter said:
Anise: Think liquorice. Not for everyone.
Click to expand...

Blech. For a saison, yes, for a Wit, I don't think so. Wit should taste very strongly of citrus, and any spice should come from the yeast strain. That's why you want to ferment fairly warm.
OP
OP

well I brewed it today and the color is off. I need to change up my extracts. But oh well hopefully it is still tasty. I am definitely gona have to take another crack at this one.

Wits will always be too dark with extract. Unless you are using 50% raw wheat and doing all grain, you will have an SRM 6-7 Witbier.

It'll still be tasty though.
S

I think given the secret spice choices, I'd definitely go with ginger. It pairs the best with orange and coriander, and in small quantities would be really nice.
OP
OP

So this batch kicked of fermentation pretty quickly but 3 days after we ran out of oil and the temp went down into the 50's and I think it got stuck. My OG was 1.060 and according to this site Wisconsin Johnsons - Alcohol/Attenuation Calculator the gravity should have gone down to 1.014 - 1.017. However my Krauzen never dropped and the gravity has been sitting around 1.024.

What do you guys think? Should I get another WYeast 3944 (what I used) and pitch it in there or is there another dry yeast that I could put in there that would finish the job without leaving an impact on taste and aroma?

Oh I did stick a spoon in there and stir it up a bit. Also the temp is hanging out 60-63 degrees which I think is still a little low but that's all I can work out at the time.
M

Made a similar recipe and used 1/4 oz orange zest, 1/4 coriander and 1 oz chamomile. I used the wrong type of yeast, I think it was safbrew wb-06, but it still turned out really good. It Had a real strong banana aroma.

I think the secret spice is pepper. I brewed this recipe a couple months ago and I'll be brewing it again this weekend. I used 20 black pepper corns, cracked them and added at flame out. It made the beer finish with a slight peppery character that you might not notice unless someone told you to look for it.
Now I'm sitting here drinking an Allagash White and I swear it ends with some pepper- even more than my brew did. I never noticed this before and I've had a lot of this beer, but I was looking for it this time. It could be spice flavors from the yeast to I suppose.

While I'm not looking to do an Allagash White clone I am harvesting their yeast for a blegian wit. I'd say this a true top cropper. I have another liter of wort to add in but it's gonna blow everywhere if I do. 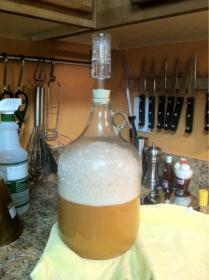 It blew all over on it's own. The center cap to my airlock was on the kitchen floor this morning with yeast running down the side of the jug.

What kind of results should I expect if I add more wort to the starter and run a blowoff tube to a carboy of wort waiting for yeast?

^^^^
How many bottles of Allagash White did you need? The standard 4 pack?
P

I don't believe any allagash bottle have their house yeast. I took the tour last time I was in Portland and they mentioned they do use a bottling yeast, i think I remember saying it was a wine yeast.FWIW, I do know you can harvest their Brett strain from stuff like confluence. Best of luck.

There was a thread on the fermentation page, and someone posted an e-mail the got from Allagash stating that the 12 oz bottles of White is the house yeast, so yes, you can get their yeast. The big bottles they use a bottling yeast, which is different then the house strain.
B

I know this thread is old, but in case anybody stumbles on it.

Just stopped at the brewery and they do use their house yeast in some bottles. Particularly most of the lower ABV brews use the house yeast for conditioning.
The higher ABV and stuff they only put into large bottles gets a different yeast for bottling.

Another thing I think sets Allagash brews apart is the carbonation level. I think they keep there's at a lower PSI than most.
T

This is an old post I know, but the latest I got was that white is now force carbonated due to the volume they need to produce. I would pick another brew to harvest from.
B

There's sediment in the bottle and as of a couple years ago I was able to harvest and fermented a Wit with it, now it could just be some of the wheat or proteins dropping out I guess. I got more clove than I like from it, could have been ferm temps, could have been the strain, but hard to tell because I didn't save any to experiment with, but I would venture saying that it's not a "clean" strain based on the clove and the citrus like esters I picked up on. So, unless they've switched to force carbing in the last couple years I wouldn't say this is valid.

Seems like many "American Belgian" breweries, regardless of their volume, like to stick with bottle conditioning. Not to mention, volume wouldn't seem to dictate the way they would need to carbonate it, other than it would have to sit in a warehouse for a couple weeks, but any decent amount of planning would solve that issue.

I just harvested some of the house yeast from their Century Ale. As far as I can tell most of the other beers they do are still bottled with the house yeast.

I would try some Cardamom. A fairly common spice in Wits.

tmac68 said:
This is an old post I know, but the latest I got was that white is now force carbonated due to the volume they need to produce. I would pick another brew to harvest from.
Click to expand...

Gats it seems that you are fortunate enough to be close by. I was at the brewery for a tour early this year, at that time the tour guide stated that all of their beer was bottle conditioned with the exception of White which is force carbonated along with the kegs. The reason being that bottle conditioning requires time and space making it cost prohibitive. This was not always the case I know as several years ago everything was bottle conditioned before their last expansion.