We (my brother and I) just brewed this beer on Saturday. Using the recipe from CloneBrews. Here are some notes on the brew so far.

1. Our goal mash temperature was 150. After the strike water had been fully added and the mash stirred, the temperature was too high at 163. Based on our experience with our equipment in our last brew, and the cold temp/grain/mash-tun, we heated strike water to 175. Obviously we made an error somewhere. (unless temp was simply still equalizing when I measured it at 163). We left the mash tun (a cooler) open to allow the temp to drop. This seemed to be effective and we shut the cooler at 151 a few minutes later. I hope the exposure of the mash to initially too high temps will not add any off flavors.

3. Our chiller was effective this time and we got the beer down to below 80 before draining it into a 5 gallon better bottle. Are we supposed to go colder to allow more trub to settle out? Should we be siphoning from the top of the brew pot instead of draining from a spout near the bottom? There is some clearance on the spout from the absolute bottom of the pot, so a significant amount of hops/trub were left behind in the kettle.

4. When I ordered my yeast online (Wyeast 1214), I didn't adjust for the gravity of the beer, and only ordered one pack. On the day of the brew I realized I'd need more yeast cells. (I do not have experience with yeast starters). As the store did not carry Wyeast, I went with Wlp530, and I mixed the two together.

5. The recipe in the book calls for only 1 week primary and 1 week secondary. Many other belgians in the book call for much longer aging. Is there any reason why this beer would be good to go after only 2 weeks?

6. Fermentation has been very active. Its at 67-68 degrees. Krausen/foam is rising up to the top of the better-bottle. Have been worried about blow-off.

I'll let you guys know how it turns out. Any feedback appreciated. 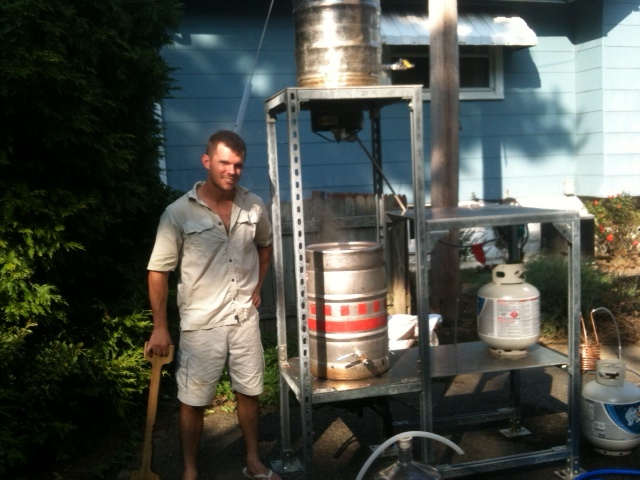 This beer has been in primary for ten days. There was not nearly as much krausen actually remaining at the top of the beer as I had thought. Some light foam had stuck to the sides of the BB near the top and it was hard to see inside to see that there was very little krausen remaining at the top. I took a sample using a turkey baster. Tasted pretty good so far, nothing tasted off. Took gravity reading and got 1.008. Since I noticed some faint carbonation in the sample i tasted, I wondered if dissolved Co2 could be affecting the hydro reading. To be safe, I took a second sample, did a process to "de-gas" it (poured back and forth between containers, shake it up). A lot of foam came up and then I let it settle. Took another reading and my gravity was still at 1.008. Since the recipe suggests that the FG on this beer should be about 1.012-1.016, I figured that I shouldn't expect it to drop much lower, and I transferred to secondary. At one point my siphon failed as I was no longer fully submerged (also picked up some trub). I probably pumped some air through the beer restarting the siphon but I don't think it was very much. Hopefully I didn't collect too much trub either. Im not too worried. I'll let you guys know how this turns out.
OP
J

Kegged this beer wednesday morning. Set the keg at 8 psi. Tasted it sunday night. Still mostly flat (as I expected), but the beer was also rather cloudy. I am wondering if this will clear up or if I should consider adding gelatin to the keg. We increased pressure to 12 and will probably taste again wednesday-friday.

Hi Jason! Im going to try this recipe aswell so its great that you made a thread about it. I dont have the clonebrew book but found the recipe online. The only thing lacking is fermentation info. Does it say anything about temperature? 7 days primary seems too short, Ill probably go 2 weeks...
I have a westmalle tripel clone in secondary right now and that recipe says atleast 2 weeks primary, 3-4 weeks secondary and then atleast 3 months in bottle before its tasty...

Im a real rookie and dont know much about this stuff but my westmalle tastes quite boring, only yeast and alcohol and i think it could be because i fermented it in quite low temp(said 68F in recipe) so i probably didnt get any esters...
OP
J

The book recommends fermenting at 70-75 degrees with Wyeast 1214 or 1762. I used a mix of 1214 and wlp530. I don't temp control my fermentation, so it went at room temp, which was around 68 I think. Turned out pretty true to style in my opinion, very happy with it. Some of the other belgians in the book recommend much longer aging times, I am not sure what makes the difference between this beer and others. I would tend to just leave it in primary for two weeks and then keg it, serve a week later.

Jason82 said:
The book recommends fermenting at 70-75 degrees with Wyeast 1214 or 1762. I used a mix of 1214 and wlp530. I don't temp control my fermentation, so it went at room temp, which was around 68 I think. Turned out pretty true to style in my opinion, very happy with it. Some of the other belgians in the book recommend much longer aging times, I am not sure what makes the difference between this beer and others. I would tend to just leave it in primary for two weeks and then keg it, serve a week later.
Click to expand...

Thanks! I used to +3 months old wyeast abbey in a 1.5L starter. Started fermenting after a few hours. It smells really nice after 24h. I have a good feeling about this one. After reading about 2nd ferm. I decided to leave it in primary for about three weeks with rising temp. Then bottle conditioning for 2 weeks. Ill make a comment about the outcome in 5 weeks

I screwed this one up. Its dark in color, flat and tastes nothing like affligem... damn it!
OP
J

damn, any clue as to what happened? Did you end up with your expected volume?

I have no idea what happened. Got a bit less volume than expected and i think i burned the wort during mashing. I did a westmalle clone aswell and it had the same problems. I waited for a couple of month and tried the beers again and they now had carbonation but still tasted like crap. I poured out the 30+ bottles and im now going to attempt some easy belgian tripels. I brewed a chouffe clone that ill think will be ok. And i brewed a pale ale and a belgian double that were great and appreciated by everyone who tried them. Ill give this recipe another go later on...

R
Abbey not sure