Hi,
I need some advice on what to do. My Dunkelweizen has stopped fermenting, its final gravity is 1.024. The OG was 1.078 by the way. I don't know what I should do. I have taken four consecutive readings all 1.024. Should I just bottle it and hop it is not too sweet, should I try and repitch it to get it down some, any ideas or advice would help.

What temperature is it at?
OP
A

Recipe? Extract or AG?
OP
A

Gravity was high due to batch size if that helps.

BrewPal says that you are about right. 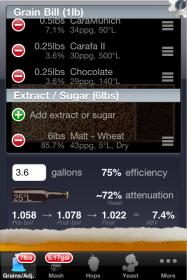 ok thanks that looks like an I phone app I will have to grab.

Warm it up, swirl the fermenter, add energizer. If that doesnt work then you could repitch but it looks like your terminal gravity is pretty close.

T-58 is known for being not particularly attenuative. Its part of it makes a good bottling strain. This is probably as low as it will go. You could theoretically dose it with another yeast strain if you wanted to dry it out, but I say just let it rest another week or 3 just to make sure, then bottle it.

Also, T-58 is not really a "proper" yeast for Dunkelweizen. Your beer will probably be delicious, but it will be more like a spicy/peppery/clove Belgian Dubbel than a real Dunkelweizen. Keep that in mind if you're trying to compare your beer to a commercial Dunkelweizen.