I have a Saison fermented with 3711. It's finished fermenting and is at 1006 (started at 1055).
I mixed in a heavy dose of a hibiscus tea into the secondary and after a week in there it's developed a great redish-pink color and a slight hibiscus flavor. Now that I have tasted it, I would really like to add a Brett character to it.

I happen to have a packet of Wyeast Brett lambicus (5528). I would really like add this in but am not of the best way to do it. Should I:
A) do nothing (I missed the boat and this is a bad idea)
B) dump the Brett into the secondary, giving the Brett some to develop. If this is viable, should I add some sugar (what kind) to give the Brett something to chew on.
D) add the Brett into my bottling bucket and bottle it all up. Do I need to also add corn sugar? Will bottles blow if I don't use thicker bottles/corks?

Any help is appreciated.

I would do B adding maltodextrin. Keep in mind it might take a while and you might lose the saison character (spice, hibiscus).

On second thought, brew it again. Mash higher or add maltodextrin and pitch brett into the secondary.

i'd go with option B. give it at least 3 months.

Thanks for the tips! I'll report back in a few months...
T

I really think that at bottling is the way to go for saisons, gives a nicer character. Alongside that you can drink it as the brett character develops.

TimT said:
I really think that at bottling is the way to go for saisons, gives a nicer character. Alongside that you can drink it as the brett character develops.
Click to expand...

It will not super attenuate. I use heavy bottles (flip tops) and carb a bit on the low side and it works.

TimT said:
It will not super attenuate.
Click to expand...

can we be sure of that? (maybe we can, i just haven't read or heard that anywhere...)


TimT said:
I use heavy bottles (flip tops) and carb a bit on the low side and it works.
Click to expand...

using thick bottles and carbing on the low side is definitely the way to go if you bottle-dose. but that means that you don't have control over final carbonation... for example you carb to 2.5 and hope that it raises to 3.5 on the assumption that the brett will add another volume. i'd be nervous about going with such an assumption, i want to *know* that i end at 3.5. but that's just me...
OP

I wanted to loop back on this thread since I have now had this beer in two local competitions under category 16E with Saison listed as the base style. I wanted to get some objective feedback. It has been a real learning experience.

I went with plan B - Dumped in the brett lambicus along with a handful of freshly picked organic blackberries (as the sugar source). It sat in my basement from August 2013 - March 2014. We live in the Northeast, so temps swing pretty low down there in the winter (55-60). Thin white pellicle formed after about a month.

I jokingly call this beer the &#8220;Polarizer&#8221; as people either love it or hate it. The competition feedback reinforces this with scores ranging from 16-20 in one competition and then 35-37 in another one shortly thereafter. Across all the judge comments, a few things stood out as takeaways that I agree with:
1 - The beer has a huge aroma with the brett coming through along with the hibiscus and blackberry. A very well balanced nose.
2 - The dense white head recedes a bit too quickly (NOTE: This was true early on. After 5 months of bottle conditioning, the head is now very persistent).
3 - The flavor has a slight tartness but it doesn&#8217;t stand up well to the aroma. The beer falls flat on the flavor front, with the brett dominating.

The beers had about three weeks in the bottle before they were entered in competitions back in March. The carbonation level was good (probably up over 3 volumes).

One other interesting comment was that this beer would go very well with a heavy meal. This was really great advice and cool to see a judge connecting the dots from beer to food. I took the advice and paired it with a steak and with a pungent cheese. Really liked it.

All in all, I am pretty happy with the results of this beer but I think I overshot on the Brett character and maybe let that secondary fermentation go for too long. Also, tossing in the organic blackberries may have introduced too many variables/bugs (as they were freshly picked and unwashed). That was a rookie move.

I have also tasted some bottles recently, that have been conditioning in my basement for 5 months, and the Brett character is getting even more intense. Tastes like smoky leather covered in pepper. The hibiscus is still there, but the berry character is totally gone or just overpowered by the brett. I love the color of this beer and it has good clarity. It&#8217;s a little tart but I wouldn&#8217;t call it a sour beer.

Thanks to all of you for providing feedback on my little experiment. It inspired me to experiment more with kind of fermentation. Cheers! 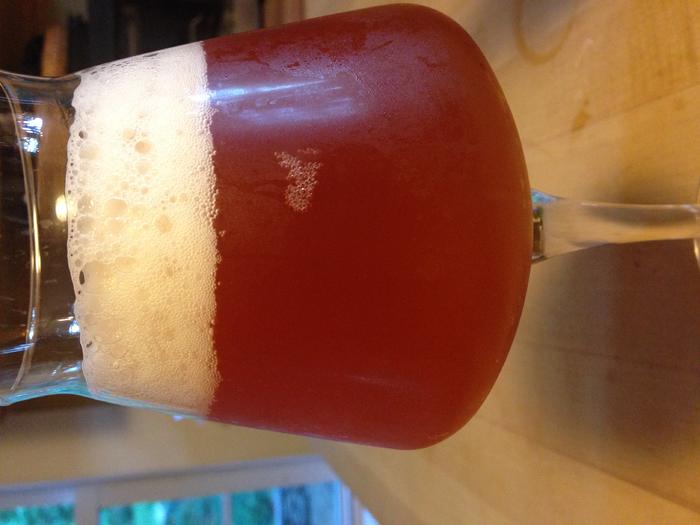 Interesting. I had a saison that finished to 1.006 that was fermented with 3711 as well, then added brett b to the secondary and aged it for a whole year with a FG of .997 and I have little to no brett character at all. Maybe the berries you added made the difference? Anyway, your beer looks awesome, I only wish I had been as lucky as you and gotten that funky character i was after.
OP

Maybe the fruit had an impact. I also never racked the beer off of the 3711.
Reading Oldsock's book and learning that Brett can make good use of autolyzed Sacch.
Or maybe it's cold basement temps. Wonder if anyone has ever tried lagering with Brett. Just thinking out loud and getting crazy now.

I didn't "lager with brett," but I used brett as a secondary for a lager. Brett itself is slower-going at lager temperatures and would take a long time to do anything.

I had used Brett C., and it exhibited more of it's "primary" style flavors than its "secondary" flavors. Mostly, this is probably because lager yeast don't produce many phenols nor esters, which brettanomyces use to produce their more interesting/complex polyphenols and polyesterphenols. Mine tasted like a ripe mango and pineapple beer. I liked it, some people thought it was awesome, others didn't care for it. I'd say it's worth doing if you like the brettanomyces strain's primary flavors, but it's not worth it if you are looking for funk.
You must log in or register to reply here.
Share:
Facebook Twitter Reddit Pinterest Tumblr WhatsApp Email Link

Adding Brett to a Saison

B
Adding Brett L to Saison