Bray’s one month mead (BOMM) thread had me fascinated in accelerating fermentation as soon as I stumbled upon it at homebrew talk. The entire idea is centered around the fact that mead generally takes longer to ferment, clear, and age because the yeast are stressed to a greater degree than what we normally would see in fermenting beer (or even wine). The reason is nutrients and pH; honey is mostly just sugar, with a bit of pollen and some enzymes, but really, it’s mostly just sugar. It’s also acidic with a pH averaging around 3.9 (about the higher end for an orange, or similar to cherries).
To overcome these issues, often (even in beer brewing where the grains generally provide a lot of nutrient) yeast nutrient is added. In mead this is essential to shortening fermentation and aging times, and Bray has quoted the standard additions of nutrient as the following: 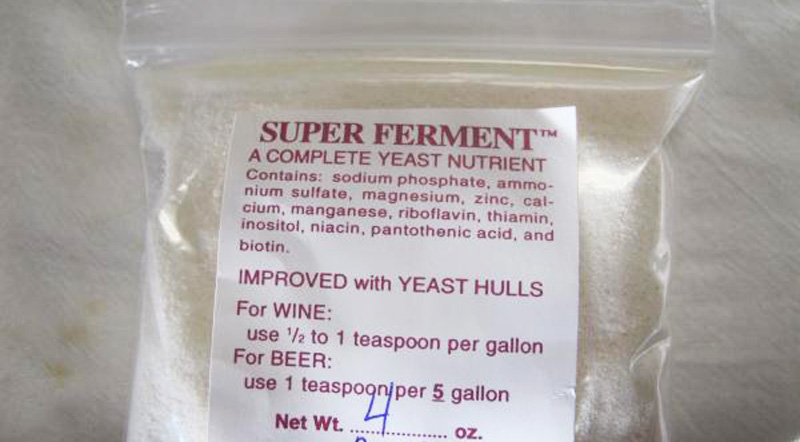 generic nutrient is usually a source f inorganic nitrogen
The TOSNA schedule for a gallon batch would suggest 4 additions of 1.25 tsp (5 tsp or 950 mg total) of Fermaid O added at 24, 48, 72 hours and Day 7 or 1/3 sugar break, whichever comes first. For 5 gallons, it would be 6.25 tsp per addition (25 tsp or 4.75 grams total).
TOSNA stands for tailored organic staggered nutrient addition, which is a mouthful but the concept is simple; instead of adding all the nutrients yeast love at the start (and thus allowing their consumption and proliferation to explode), the additions of nutrient are added in a step-wise, or staggered, manner. This keeps the yeast happy, but not too happy. To keep a long story short, Fermaid O is organic nutrient, while Fermaid K and DAP (which were previously the most popular nutrient additions) mostly inorganic sources of nitrogen, phosphate and other essentials. Fermaid O can be used in later stages of fermentation, while Fermaid K and DAP can only be utilized by yeast in the onset (before the 1/3 sugar break), while oxygen levels are high.

With nutrients out of the way, we need to address pH; it is too low in mead, and we need to make it higher. This is done by adding potassium carbonate, chemical formula K2CO3, which hits two birds with one stone. Not only does this raise the pH, but it also provides potassium, which increases the alcohol tolerance (and thus lowers the stress) of yeast.
Lastly, the BOMM requires stirring or agitation which serves two functions – one to distribute nutrients that has fallen to the bottom back into solution, and to degas the accumulating CO2. CO2 is toxic to yeast, it lowers the pH by creating carbonic acid and it makes it harder for yeast to expel CO2, slowing metabolism and fermentation.
At this point we have our three major features that add the “OMM” to BOMM: Nutrient, potassium carbonate, and degassing. Together, these have been known to improve fermentation time such that the mead is drinkable in as little as a month (comparable to greater than 6 months as the norm).


Experimenting With the Modern Classic 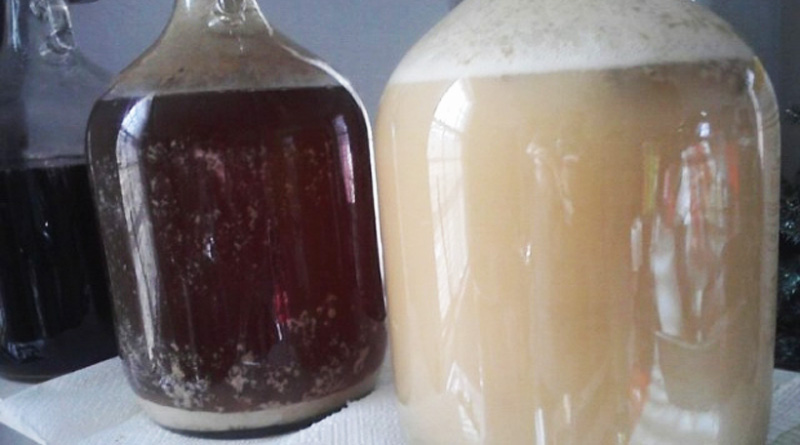 To compound on Bray’s idea, and promote my own laziness, I wanted to see if constant stirring accelerated the fermentation and aging time even more. My experiment was flawed from the beginning because I had no temperature control, and the room which housed my fermentation bottles reached a fiery 95°F at one point. Nonetheless, the experiment was carried out and some hopeful, yet important signs were noted.
First, the gravity of the stirred sample dropped significantly faster from 1.092 to 1.030 when compared to the unstirred sample. The speed between these gravity readings were approximately 24 hours faster for the stirred. Additionally, at 1.030 the stirred sample had no off flavors, and tasted just of a lightly sparkling honey water mixture, while the unstirred had sulfurous tones.
However, after hitting 1.030, the stirred sample slowed, and the unstirred caught up, and around the 1.020 mark, both seemed to progress at the same pace. Ultimately, both hit their final gravity’s of 1.002 at the same time. Unfortunately the stirred version adopted many more off flavors in comparison. In fact, the stirred was nearly undrinkable for a year, as a musty flavor developed and lingered for a long period of time.
Moving forward, what I’ve learned and will be attempting in the coming experiment is that DAP and Fermaid K are not useful for the yeast after the first half of the sugar has been fermented. The second half of fermentation then requires Fermaid O. Additionally, agitation in yeast has been shown to cause increased production of unwanted side-products such as fusel alcohols, however the mechanism of this is not known, and likely occurs due to overly-fast fermentation without staggered nutrient additions timed properly. Conversely, this paper indicates higher alcohol tolerance with stirred yeast. 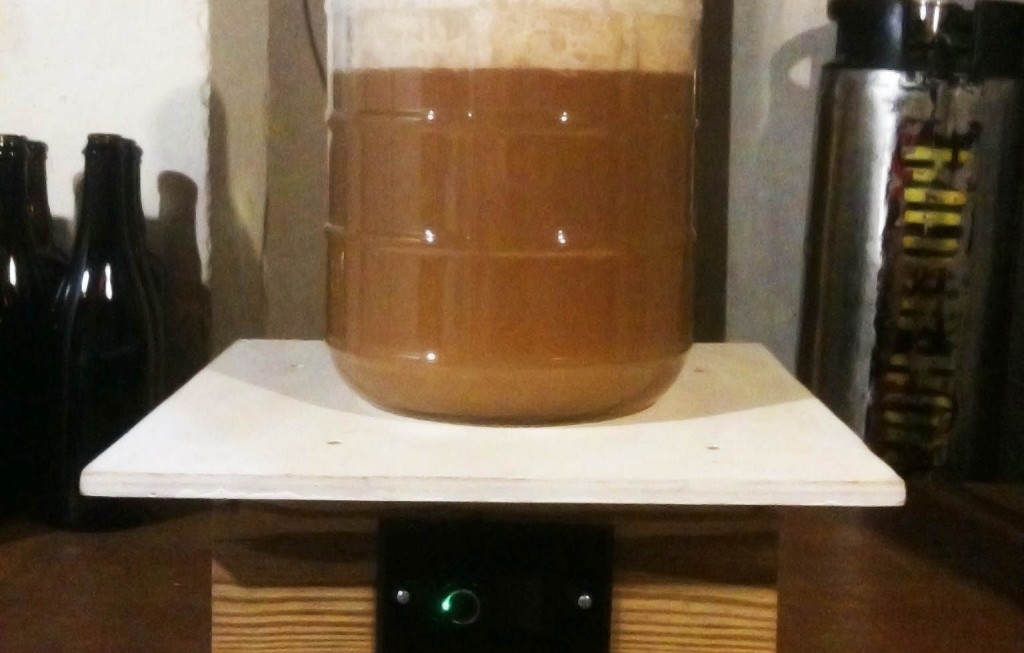 Try a constant stirring method on your next mead!
So in the last experiment, I created a basically failed attempt at making a BOMM with a stir plate – although there were hints of success, the lack of temperature control threw the results out the window. Recently I came back at the project with a bit more knowledge about TOSNA (tailored organic nutrient addition), starter usage, and assured temperature control. The results are fantastic.
First, I began with Bray’s recommendation of WYeast 1388 and a starter. I bought two packets and pitched them both in starter material and pitched to a starting gravity of 1.106 of perfectly equal 1-gallon batches of orange blossom honey. I then followed all of Bray’s recommendations with a few exceptions.
At time zero:
Add 3/4 tsp of 1:2 DAP:Fermaid K
Add 1 tsp potassium carbonate.
Shake like hell to aerate.
Pitched Wyeast 1388 from a 1 liter starter.
Set on stir plate and stir enough to see vortex at the top.
Temperature between 62-65° F.
At 1/3 and 2/3 sugar break (i.e. ~1.066 and 1.033 respectively):
Add ¾ tsp of Fermaid-O
At 1.033, remove from stir plate.
This change from Fermaid-K/DAP to Fermaid-O is because yeast have a hard time using inorganic substrates after they have gone through the reproductive cycle and enter into anaerobic conditions with higher alcohol. They can, however, utilize Fermaid-O (the O stands for organic, apparently).
Additionally, once this change occurs, I believe that agitating (stirring) the yeast stresses them, as they are now slower to metabolize sugars in the anaerobic conditions and causes off-flavors you don’t want in mead. Thus, in their last stretch of breaking down the sugars into that intoxicating liquid, ethanol, we want to pamper them as much as possible.
The Results were clear. Both meads ended up drinkable at the end of one month, but the unstirred mead had a very “green” musty or bready flavor, easily ignored, but certainly would benefit from age. The stirred mead was as good as some of my 8-month old aged BOMMs which turned out hot at the start and cooled off. This tasted like I had aged it nearly a year! After an additional two weeks, the unstirred BOMM aged out well, and only had slight hints of “green” flavor. I ended up adding mulling spices to both and can say these are both my best meads to date.


So What Have I learned Here?

Nutrient addition is absolutely essential, this removes off flavors before they have a chance to start.
The starter allowed this to finish quickly within 3 weeks to the final gravity (from 1.106!) and additionally helped minimize off flavors.
No surprise, temperature control is always a significant factor.
Finally, stirring the mead for the first 2/3 of fermentation produces a quicker, cleaner result. With all that said, #4 is optional, since both meads aged out a few months are likely going to taste nearly identical, but at that 30-day mark, there is a distinct difference in giving those yeasties a little boost in acquiring their food. So give it a try, most of us have stir plates for starters, why not try it with your next 1-gallon batch?

Thanks for posting. I'm going to do TOSNA with my next one gallon batch. I don't have strict temperature control, but I have a heat pump on my house and the temperature swings between 59 and 70. If I ever want to make a one month mead I know I need a temperature control chamber.
Question:
In any situation of brewing / fermenting, if one has no access to "proper" yeast nutrients, has anyone ever used any type of "multi vitamins", as used for human consumption?
I saw mention of it somewhere on a "non" beer / wine / mead site dealing with fermentation.
Thanks!
I have seen people say that they use vitamin tablets and they may work... but yeast also need organic nitrogen and I am not sure that those tabs provide the nitrogen but then I am not a chemist or a biologist...
Let me make sure I have this correct: So if you're using the TOSNA method with Fermaid O, do you not use DAP as you would with Fermaid K? Thanks!
You must log in or register to reply here.
Share:
Facebook Twitter Reddit Pinterest Tumblr WhatsApp Email Link