My youngest brother is getting married this summer and I was thinking about making a beer to offer at his reception. He likes Odell's 90 Shilling and I am trying to make a respectable clone. There are a few online recipes I have looked at and one claims to have the grain bill percentages from the brewery. Most of the recipes I've seen list cascade as the hop, but Odell's website says Perle and Nugget. They also list ABV as 5.3% and IBU as 32. I used the Scottish Export as my style although I know 90 Shilling isn't quite to style. Here is my version and I was curious if anyone notices anything that doesn't look right. Disregard the mash pH profile info as I will be using Brun water for that step and also the measured OG and FG info (I'm not sure why that's showing up). Thanks for your ideas.
Nick 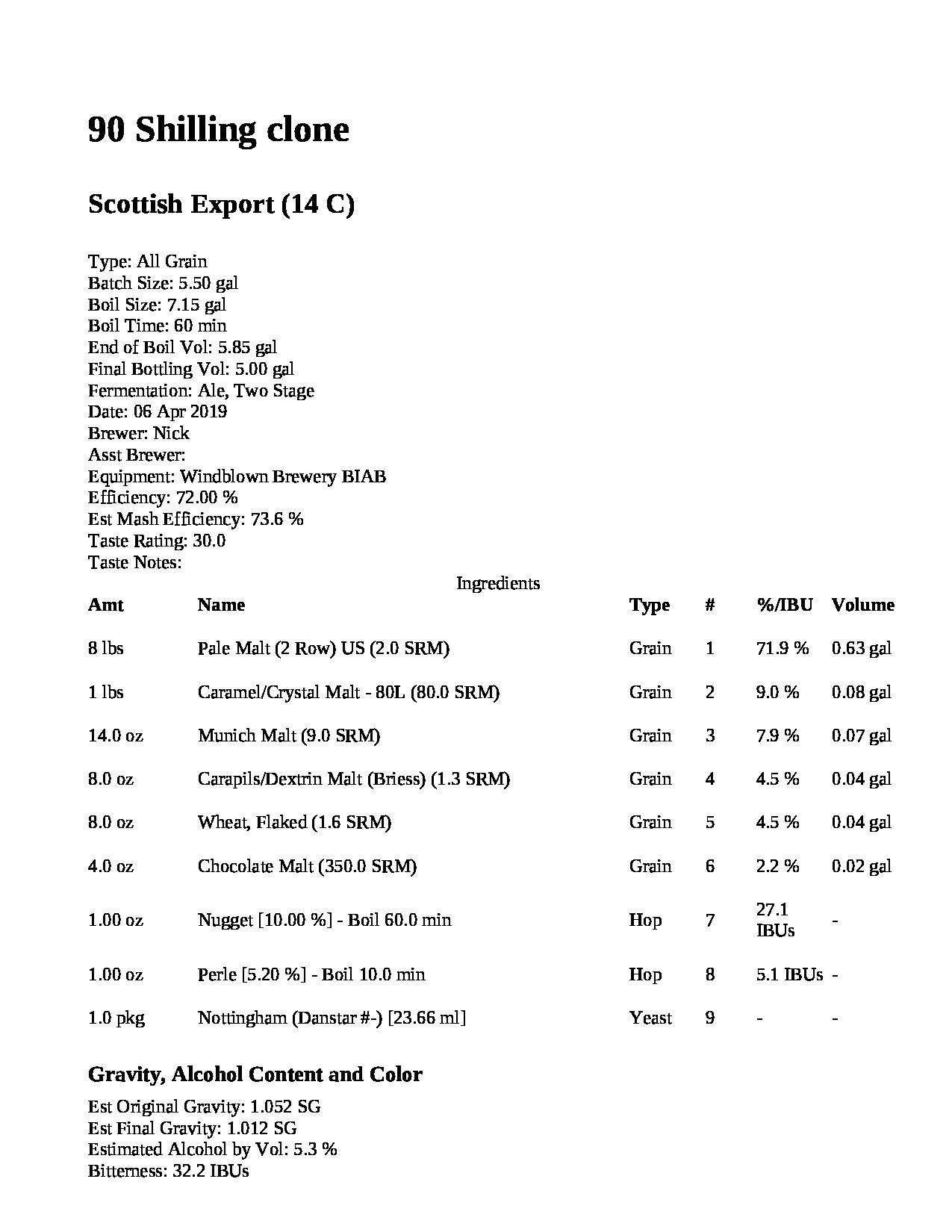 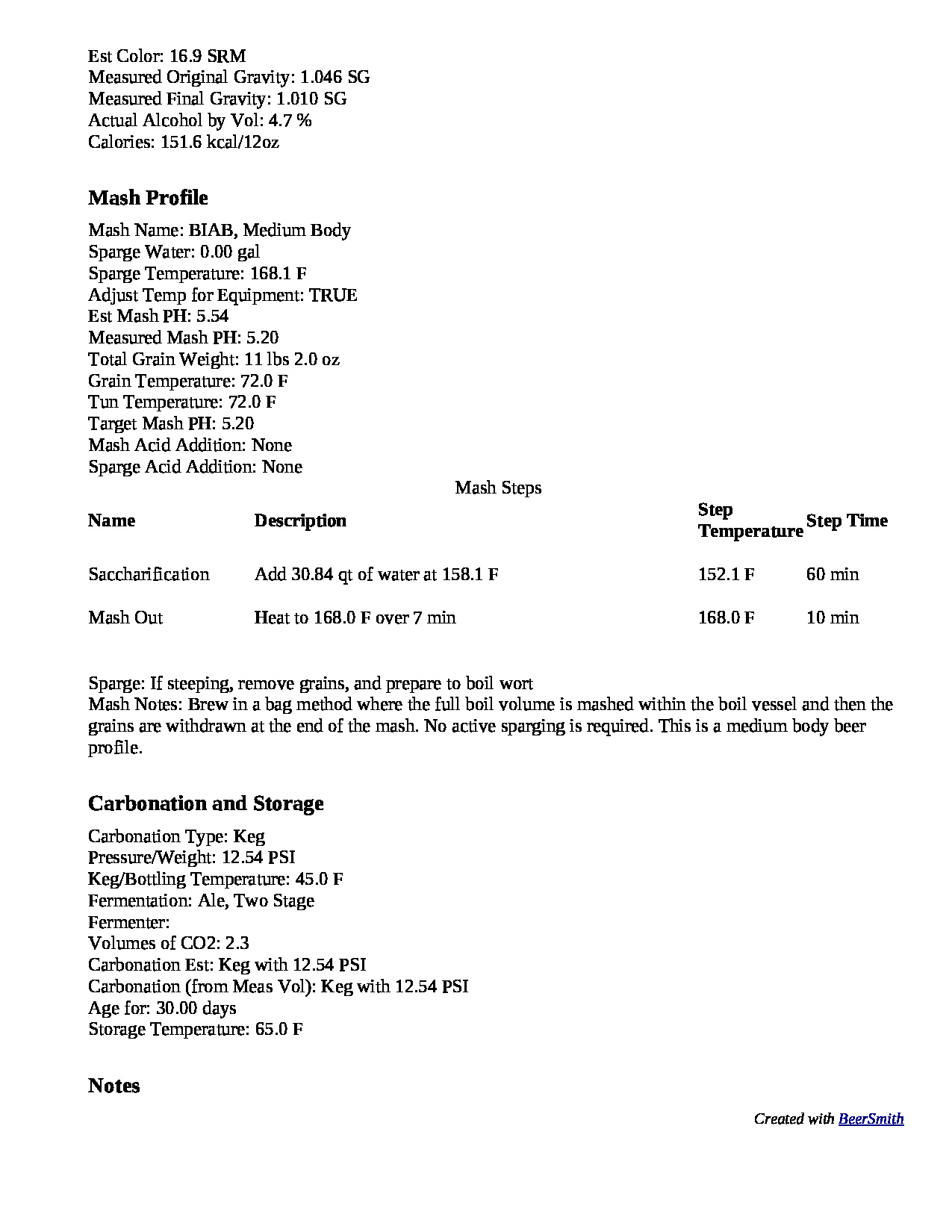 Never brewed this, but for what it is worth, got if from a Ft.Collins home brewers 'brew day' event.

bierhaus15 said:
Never brewed this, but for what it is worth, got if from a Ft.Collins home brewers 'brew day' event.

I found the same recipe listed in this 9 year old thread https://www.homebrewtalk.com/forum/threads/odell-90-shilling-clone.146516/
and its the one using cascade hops. I'm wondering if Odell's has tweaked their recipe since the info from their website contradicts this recipe which is supposedly from the owner of the brewery. The hops and IBUs are slightly different. I can definitely change my crystal color. My other numbers are similar. I wonder what the difference would be between the flaked wheat compared to the wheat malt? I'm not sure what the "Cara Malt" is either. I've only had this beer a couple times and my pallet isn't refined enough to pick everything out.

Traditionally Scottish brewers kept their grist very simple. Many used only one or two base malts. Specialty malts and adjuncts were minimal. But then again, I'm looking at 19th and early 20th century recipes. If that grain bill produces what you intended then use it. I think there is too much going on.

90 Shilling is our smooth and complex flagship beer. A medium-bodied amber ale with a distinct burnished copper color and a deeply pleasant aroma. The name 90 Shilling comes from the Scottish method of taxing beer. Only the highest quality beers were taxed 90 Shillings. We think you’ll find this original ale brilliantly refreshing, and worth every Shilling.
Click to expand...

The current website also says 32 IBU, whereas most of the review sites like Untappd peg it at 27 IBU. So I suspect this is a beer that has evolved through time - not surprising for a beer that is 30 years old. On the other hand, the above is clearly incomplete, as it doesn't mention a base malt - is it omitting some of the speciality grains as well? Maybe, maybe not.

It's the Colorado representative in that HBA thing of a recipe from every US state from a while ago which has a 6-grain grist of pale/Munich/Crystal 10/flaked wheat/crystal 15/chocolate with Perle/Nugget/Cascade to 27 IBU. Most of those recipes came direct from the brewery, but I'm not sure all of them did.

Just to confuse things further, this review from ?2010 says "At 5.3% ABV, it’s a first-rate thirst quencher bursting with integrity. The sweet biscuity malts are easily identifiable, as are the bitter citrus hops that I detected in the nose. Hops used are Northern Brewer and Cascade. Malts are Crystal, Pale and Chocolate (thanks to Lynsey from Odell)."

So back then there was a definite citrus taste, and Cascade was part of the hop bill. Is that citrus there in the current incarnation? Not having had it, all I can go on is the original intention which is to create a "lighter" version of a USian's idea of Scottish beer in the 1980s. Which of course tended to be rather far from the truth - it was still thought they were not very bitter (when they could be over 140 IBU). The grists also tended to be very simple, just pale malt, or pale with some sugar/grits, although by the 20th century they could add a touch of black for colour.

90/- in particular was a bit of a funny one, the Usher's version started the 1920s as a draught beer of 4.9% but by 1928 it had become essentially the bottled version of ~4% 60/-, and after WWII the Younger's versions were down to 3.3%. So if Odell are claiming to be a "lighter" version of something, that would imply one of the stronger beers of the 19th century, which in theory would mean a super-simple grist (probably of Chevallier) - but I know that's not how it works....

So looking at the OP's recipe from a British perspective without having drunk the Odell beer, the obvious thing that stands out is the Nottingham yeast. For Scottish beers you want a yeast with much lower attenuation - mostly they were under 70% so if you're going dry then I'd use Windsor or S-33, if liquid then something like Wyeast 1728, and pitch sub-60F and let it free-rise. I don't know how Odell carbonate but 2.3vol is high for any kind of British style, I'd go for more like 1.8vol or less. Don't complicate the grist any more than you need to - and a little chocolate goes a long way.
OP

Thanks for all the input. Although 90 Shilling bears that name, my understanding is that it’s not very true to style. I’ve only drank a few myself, and at the time I was just drinking beer and not paying attention to the flavors. I think I’m going to switch to wheat malt and drop the crystal down to 40. I’ll look into the yeast a little bit more... if I remember correctly, it’s somewhat dry with a fair amount of carbonation.
You must log in or register to reply here.
Share:
Facebook Twitter Reddit Pinterest Tumblr WhatsApp Email Link