Just wanted to share some of my current progress. I just stabilized 2 meads after 3 weeks of primary fermentation. After a 48 hour wait period it will be time to rack to secondary.

Fermentation was nice and slow, they both got a proper treatment from gofirm before pitching as well as fermaid O feedings at pitching, 1/3rd and 2/3rd sugar breaks.

They both get some medium toast American oak chips for 2 weeks. The Acerglyn will get some more pecan extract while the mango habanero will get more mangos and more habaneros.

The mango will get 8-16oz of honey for back sweetening, the Acerglyn will get 24-32oz. Blackberry honey for the both of em!

The surprise for me hear is that the mango habanero fermented more than I though it would. That yeast went well past what it had any right to (woot for SNA and gofirm!). I hoped it would but was anticipating it finishing a little sweet than it did. This means I now have more control over how sweet it finishes because I’m only adding sugar back in.

Also pictured is my horrible horrible mead #2 (Cherry). It benifitted from 6 weeks on oak chips. Now it gets 3 weeks on tart cherries, then it’s on to clearing/aging for probably 50 years. 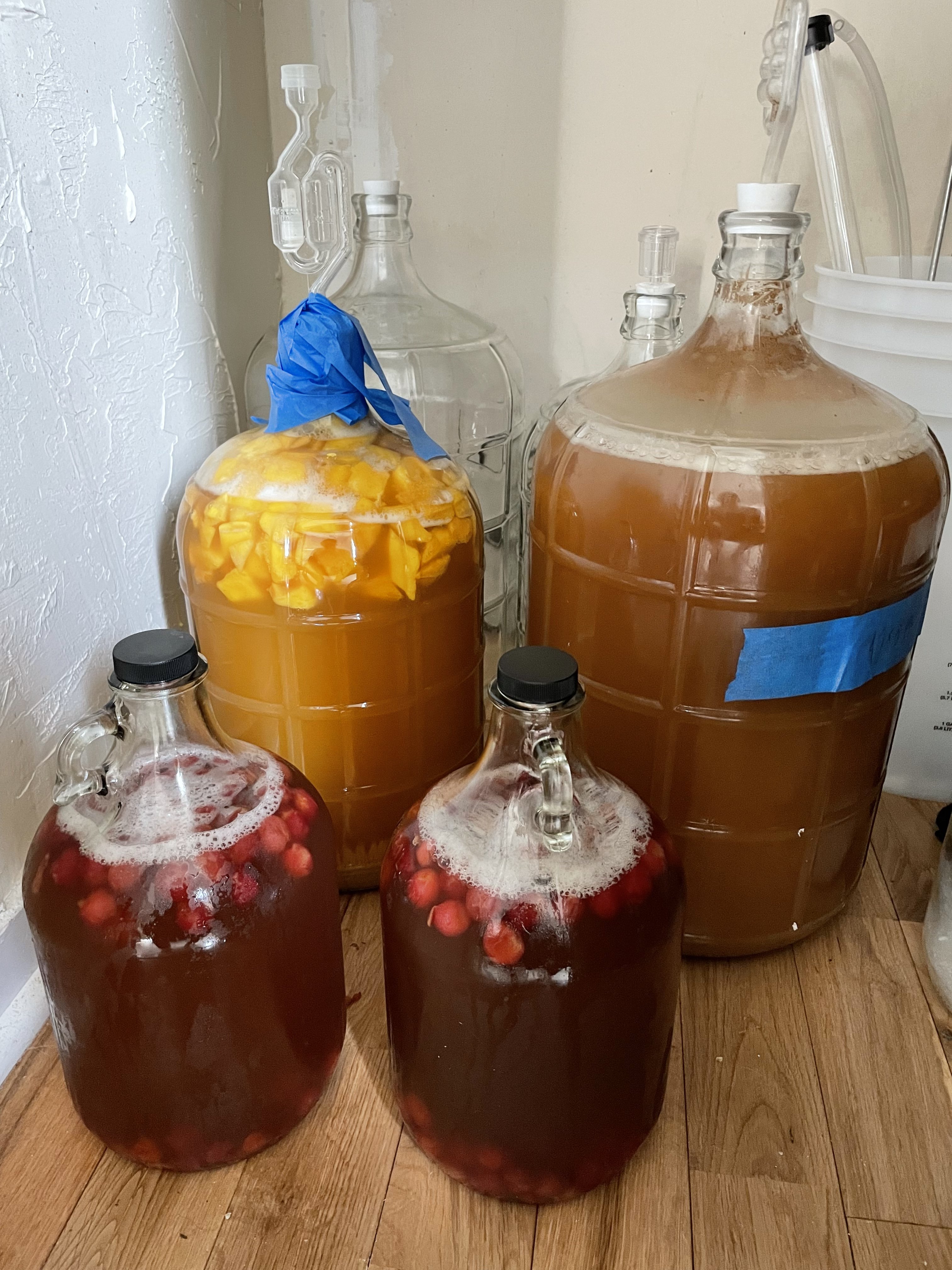 More time has passed and I have decided “mainly out of being too excited” that it’s been close enough to 2 weeks (technical only 12.5 days but who’s counting). 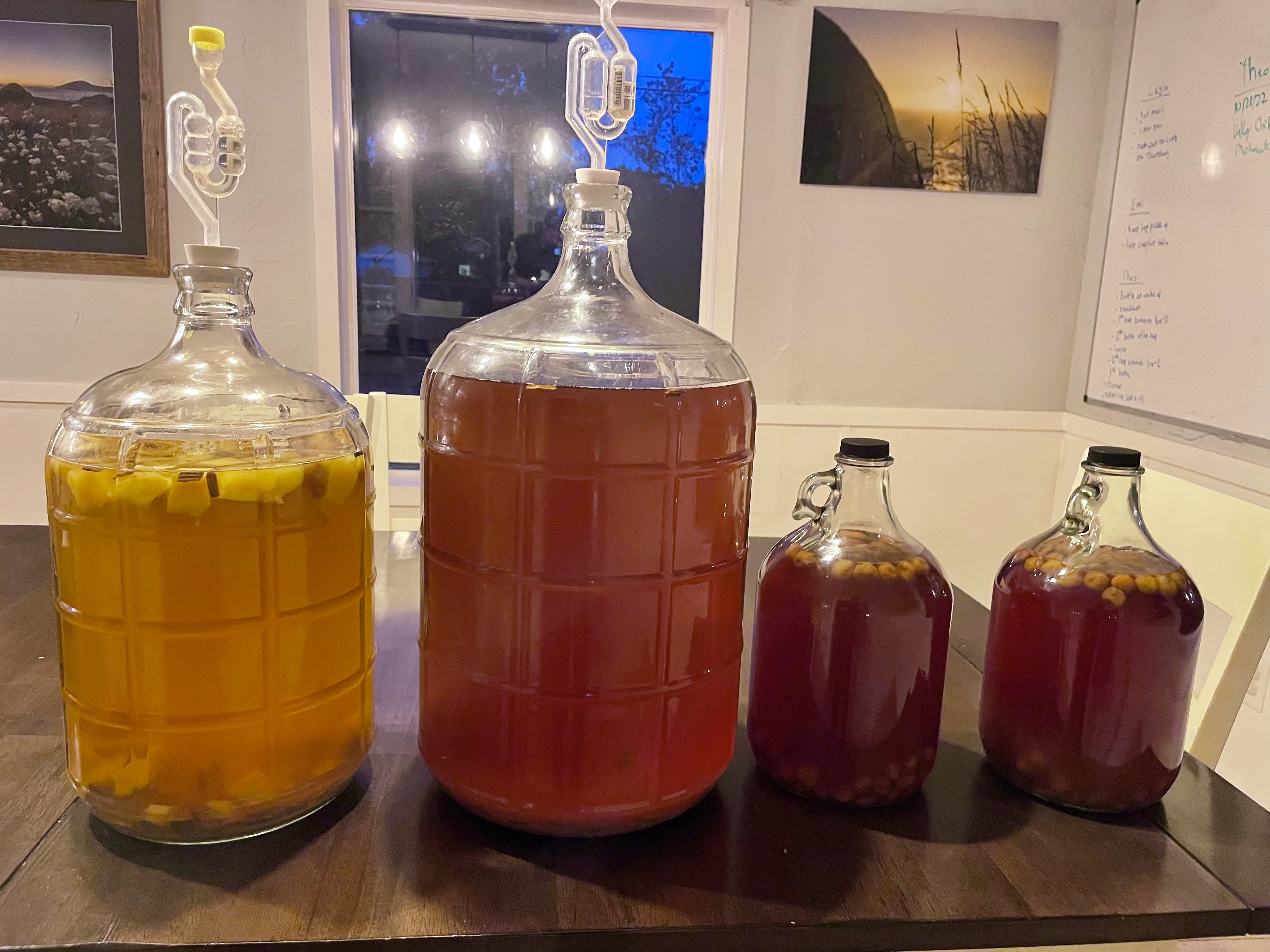 I racked all 3 meads off their secondary flavor profile additives. They now are sediment free and starting their aging/clearing phase. Based off tasting notes, the Acerglyn and Cherry mead might be ready to bottle the week before thanksgiving (WOOT!). The mango habanero will probably need to age until early January.
Now for the best part, tasting notes!

These 3 glasses came off the bottom of the carboys, near the gunk. They might not represent the best parts but should give me a good sample of the current state. 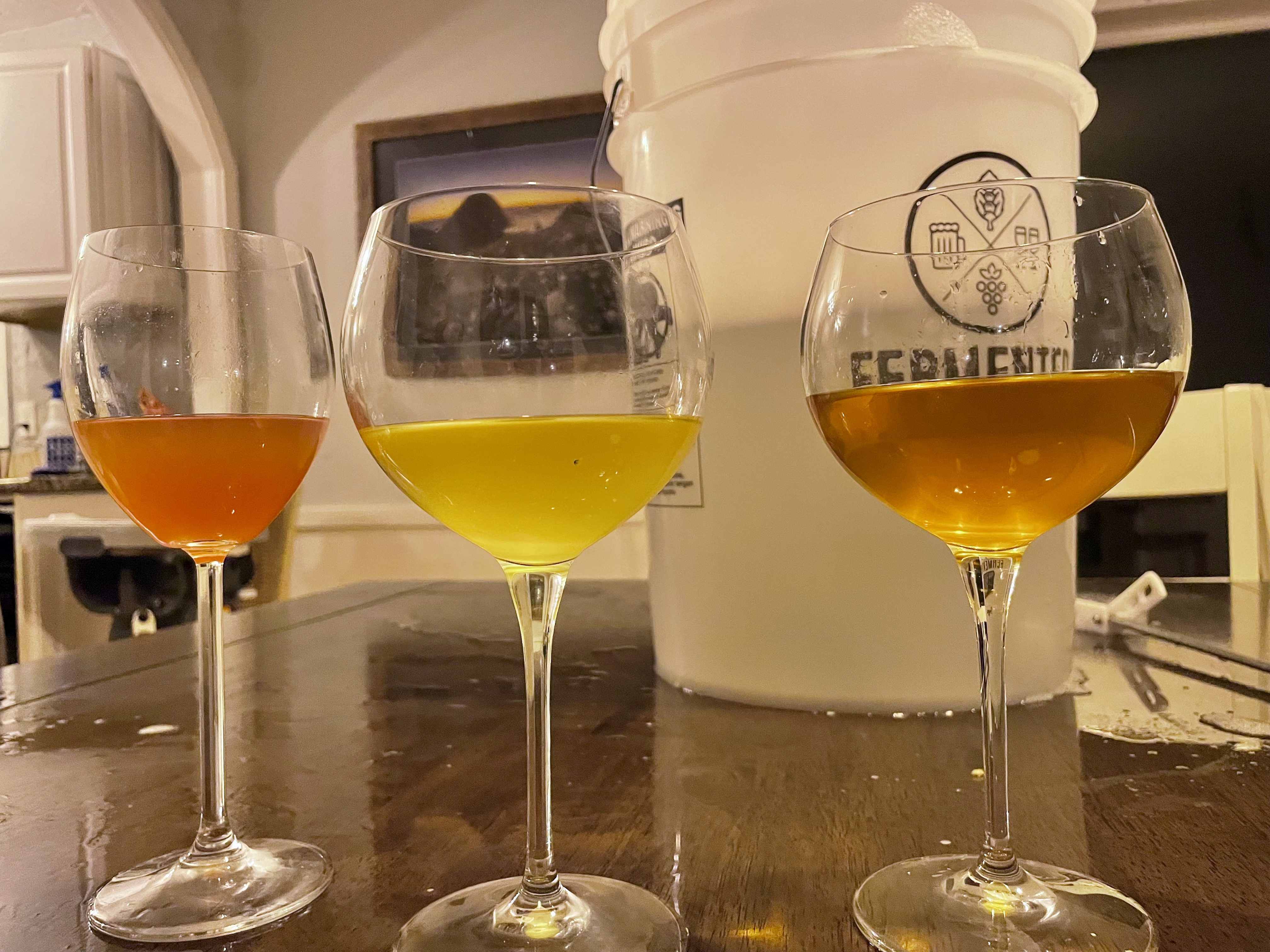 The jet foul aroma has completely dissipated, no lingering after taste of gasoline. The 4 weeks of oak did a good job to take that. 3 weeks on tart cherries did a lot for the flavor too. It is now VERY boldly cherry. It’s in the nose it’s in the flavor it’s flippin every where. It needs to mellow a touch. I also put in 2 cinnamon stick that I completely forgot about until I cleaned out the carboys. That added a nice spice not to break up the cherries. Overall, it’s still a little sweet but I knew it would be. It stalled fermentation in primary at 1.02, it was meant to go to 1.000. Still got 16% abv so not the end of the world. This should age so the cherry can mellow, probably be awesome by Christmas.

On the nose, it’s all feet. So much footy aroma, oh god what have I done. I really hope it ages out because, whew. The flavor though is great. Up front it is nice and oaky. Much like a $15 bottle of California Chardonnay. Past that comes a nice soft round mango profile. The finish is all hot tingly spice. Not overwhelming but enough to feel hot/spicy on a big drink. Small sips feel heat but mainly make your mouth and lips tingle. It’s a different kind of spice than I usually encounter, the physical feeling that capsicum causes is much more pronounced than the actual spice.

The nose is like putting your face in a barrel full of nuts. Almonds, walnuts and pecans mainly. It’s heaven.

The mead is still a bit sweeter than I was hoping for… should have back sweetened with 16-20 oz of honey instead of 24. Not too bad though and better than the first try. The maple flavor is very bold and it is balanced nicely with the honey. Using dark maple syrup with buckwheat honey really paid off here. Last time the flavors where much more mild and overwhelmed from too much back sweetening. It finished with a nice light touch of orange at the end. I wish it was a little more orangy but no biggy. In another month the flavors will relax and balance out. This one is going to knock it out of the park with a piece of pumpkin pie on thanksgiving day.

Those meads look wonderful and extremely delicious and they all seem to be looking as if they have nice legs on them.
OP
OP
S

Ren06 said:
Those meads look wonderful and extremely delicious and they all seem to be looking as if they have nice legs on them.
Click to expand...

They are all tasty although I am scratching my head as to the footy oder of the mango habanero. They are all rather leggy too, the lightest one sits at 14.5 abv, the other 2 are both around 16%

I’m hoping a good month or 3 will age out the dank smells, otherwise I might try to hit it with some oak again.
OP
OP
S

It’s bottling day! (Expect for the red wine on the far left) 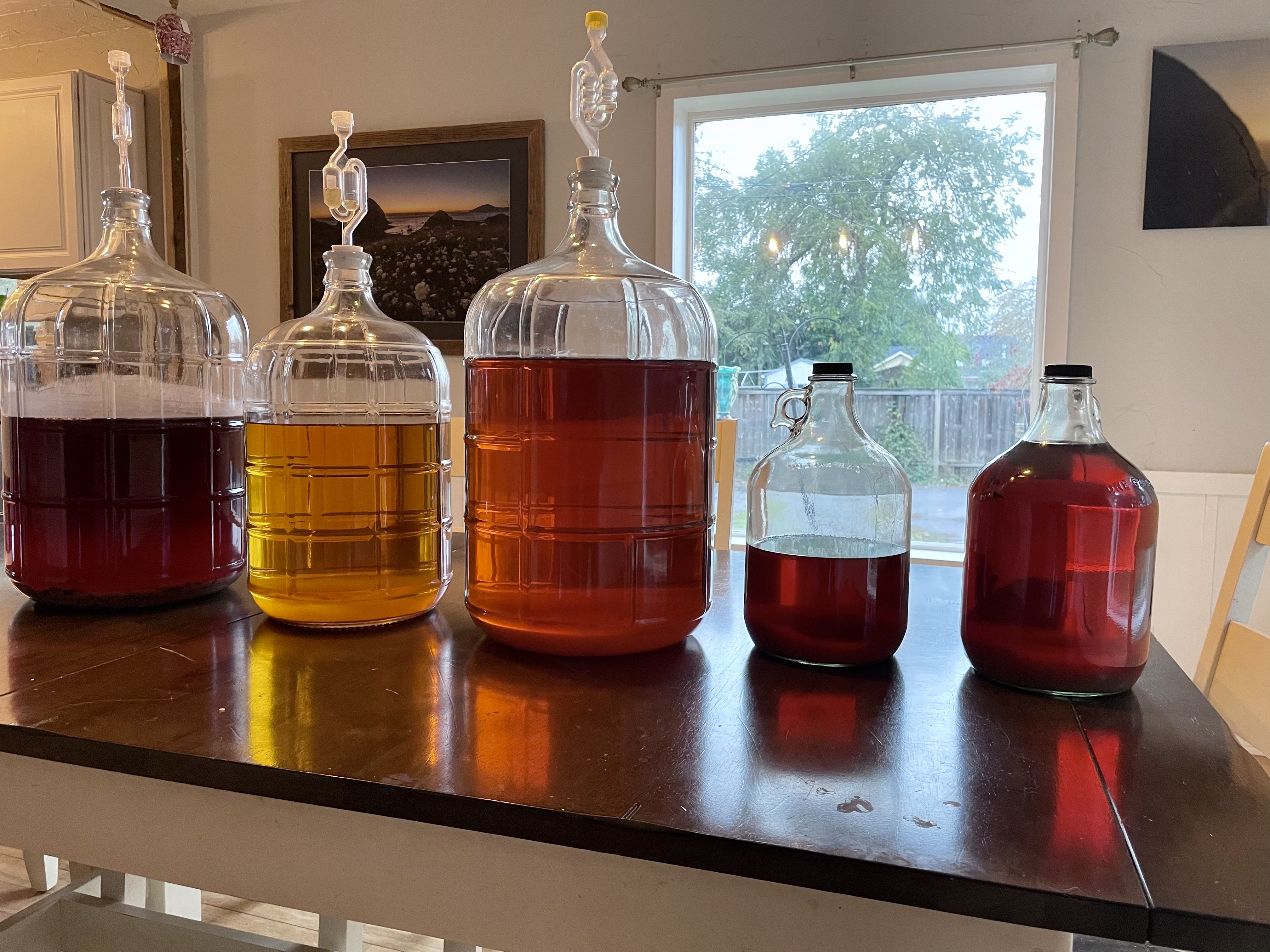 I ended up bottling all 3 of my meads today. They had all cleared nicely and the issues I had with the flavors/smells had mostly cleared up. I figured it would be better to bottle now and just let them age instead of leaving them in carboys with too much head space.

Started by racking them off all the remaining sediment. This keeps me from worrying about gunk in my bottles. 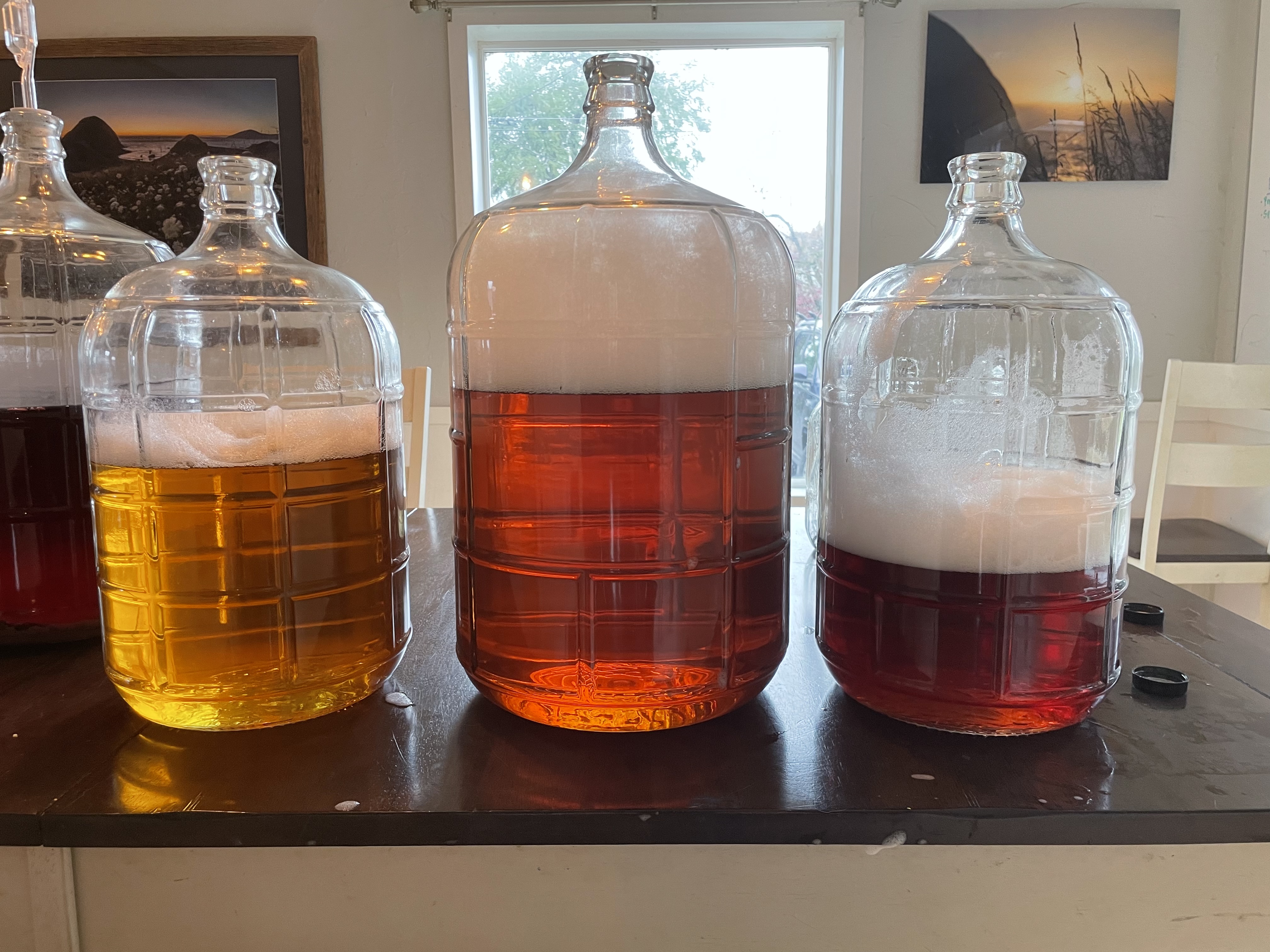 The footy notes are almost completely gone out of the mango habanero, the Acerglyn is mind blowing good and the cherry is a solid ok. I really like the fruit flavors in it, it’s just sweeter than I was originally hoping for. All in all not bad though and still relatively young.
Cherry started 8/2/22
Mango habanero started 9/18
Acerglyn started 9/18

After all said and done I have 5 bottles of cherry (started with 2 gallons), 9 bottles of mango habanero (started with 3 gallons) and 16 bottles of Acerglyn. All bottles are 750mL, so I lost a boat load of volume loss from beginning to end. Probably 30-40% depending on which brew. 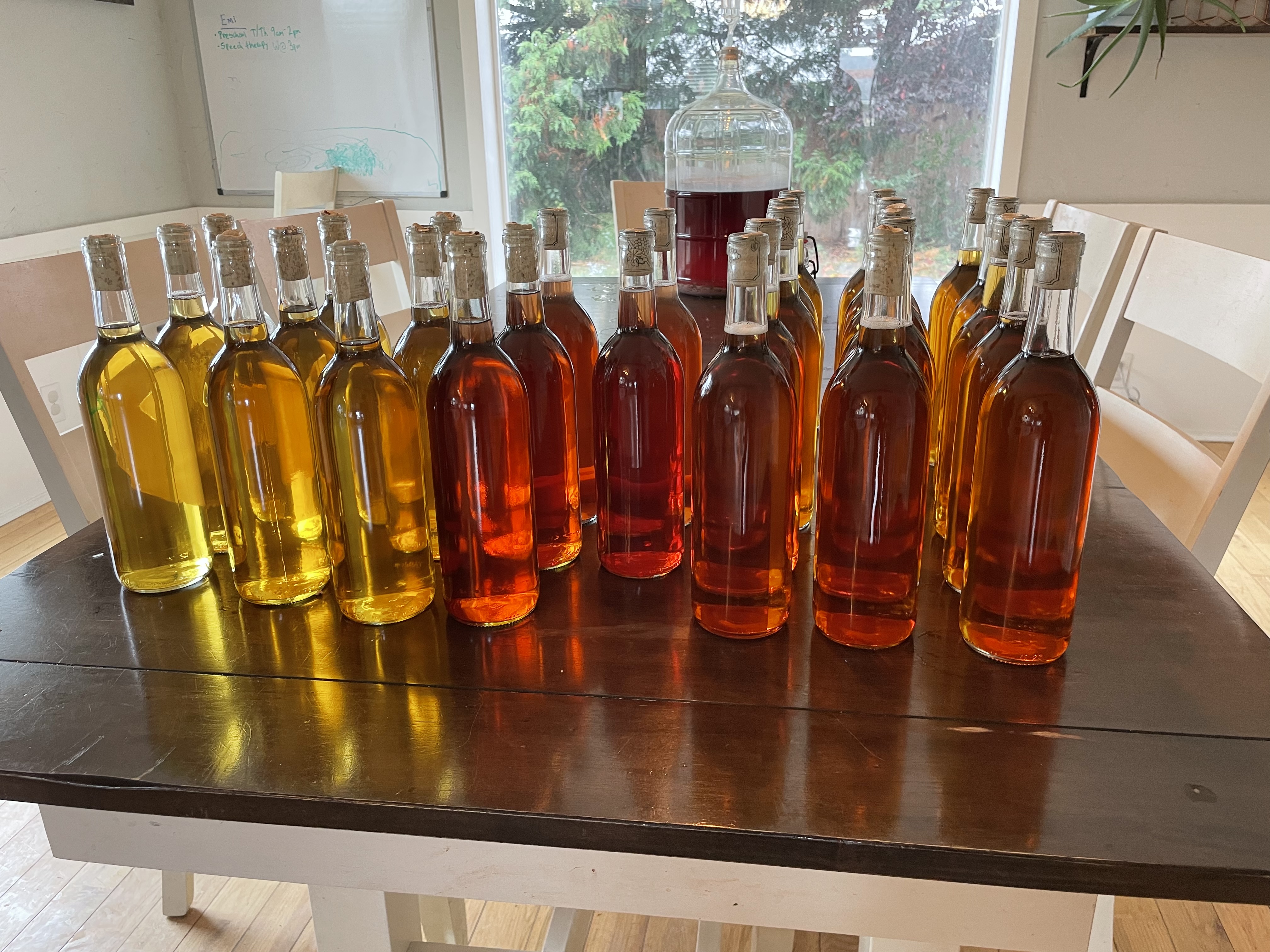 S
Looking for advice on recipe

New must on old yeast cake

W
Newbie - done with fermentation.....now what