I tried making 5 gallons of hard cider last year. it was definitely potent, but it tasted like hell, so here's what I have going this year:

I just started it on 10-11-2011 This yeast didn't take any additional effort to get it going. I poured the honey, brown sugar, and 3/4 gallon of cider into a pot and let it simmer to dissolve the sugar and honey. In the meantime, I let the remaining gallons of cider get close to room temp. I poured the sugar/honey/cider mixture into my fermentation bucket, then poured all of the remaining cider into it. I sealed the lid, added my airlock, and in less than 2 hours, the airlock was already bubbling!
I'm going to rack it out a week or so after I started and check the gravity of it. I have a feeling this one's going to pack a punch like last years, but here's hoping it tastes better!

I do have a potentially serious problem: I didn't start my cider in a carboy; I am using a fermentation bucket with a spigot towards the bottom of the bucket (for easy bottling I'm assuming had I used this for my secondary container) and the top has a small diameter hole big enough for a rubber stopper for my airlock. My problem is, the hole in my lid is too small for my racking cane to slide into it.

I was thinking I could re-sanitize the outside of the lid, a knife/razorblade, and an appropriate sized rubber grommet. I would use a marker to trace out my hole, then quickly cut the hole I want. I would leave the rubber stopper and airlock in it so I don't lose the plastic piece in my cider. Then I'd install the rubber grommet, hopefully without dropping it into the bucket (ill have a few backups handy), then re-insert the airlock/rubber stopper. If I do this fast enough, should I be concerned about air making contact with my cider? I would much rather use my racking cane than the existing spigot on the bucket so I don't dispense the lee into my secondary fermenter.

I'm yet to make a cider, but I would have thought it would make little difference just taking the lid off, as long as you don't leave it sitting there for ages? If you cut a hole its just going to pull air in as it siphons out anyway.
OP
OP

Insomniac said:
I'm yet to make a cider, but I would have thought it would make little difference just taking the lid off, as long as you don't leave it sitting there for ages? If you cut a hole its just going to pull air in as it siphons out anyway.
Click to expand...

True, but it wouldn't be as much as taking off the entire lid. I think the way I want to do it limits the air exposure.

you're thinking too much. have a drink, open the bucket, siphon off the cider, stop fretting. get drunk. it will be fine
OP
OP

dinnerstick said:
you're thinking too much. have a drink, open the bucket, siphon off the cider, stop fretting. get drunk. it will be fine
Click to expand...

Yeah? I think I can do that!

Well, if it isn't going to be an issue removing the lid completely when I rack it out then I won't even bother cutting a larger hole. I just know not to use this bucket for my primary next time. I ordered a few supplies (that my LHBS doesn't sell yet) from Bells Brewery General Store in Kalamazoo, MI that I should be getting by late next week. Then I'll go buy me a 6.5 gallon glass carboy from my local shop to use for my primary from now on. If I like how my current cider is tasting, I'll go ahead make another round of it. If not, I'll tweak my recipe a little bit and see what happens.

When I use a 5gal bucket for primary I just lay the lid over it once I get the siphon going, it make it a little less likely junk will fall in. You can also use aluminum foil, this is what I do for my bottling bucket as I don't have a lid for it. But as Dinnerstick said, don't worry so much, it's not a big deal.

dinnerstick said:
you're thinking too much. have a drink, open the bucket, siphon off the cider, stop fretting. get drunk. it will be fine
Click to expand...

this/\
unless you're planning on racking outside on a windy fall day while your neighbor mulches leaves on his second floor deck and his wife beats out their rugs with a stick, you don't need to worry about much at all.
OP
OP

thanks for the advice everybody! I'll be racking this week sometime, I'll keep you all updated.
OP
OP

OK I finally bit the bullet and bought myself a glass carboy...I am looking forward to being able to watch my cider progress tomorrow or wednesday I will be racking out of my fermentation bucket into my carboy, then I will take a gravity measurement and taste test. Keeping my fingers crossed!
OP
OP

Well it's been 1 week since I started my cider. I racked it into my brand new (and sanitized) 6.5 gallon carboy. My original SG was 1.080, and today it is at 1.040, so I plan on checking it in another week to see if it gets closer to 1.000. I was racking out of a fermentation bucket and couldn't tell where the end of my racking cane was and ended up sucking up a lot of the lee from the bottom of the bucket. If I am feeling ambitious, I will rack it again when it hits 1.000 SG and let it sit lee-free.

Right now though, it is tasting deee-licious! I am really liking the flavor I am getting from the brown sugar/honey combination I used. It is still really sweet, but there is still plenty of sugar for the yeast to get after. I knew there would be some head space at the top of the carboy, and I am hoping this isn't too much. If it is, I will add more cider into it and just let it go even longer. So, my week 1 report is that it is going very smoothly. Having all of the right equipment and tools sure is going a long way. My next batch of cider I will definitely use my carboy first, then fermentation bucket second (or go buy another carboy ) Bottoms up! 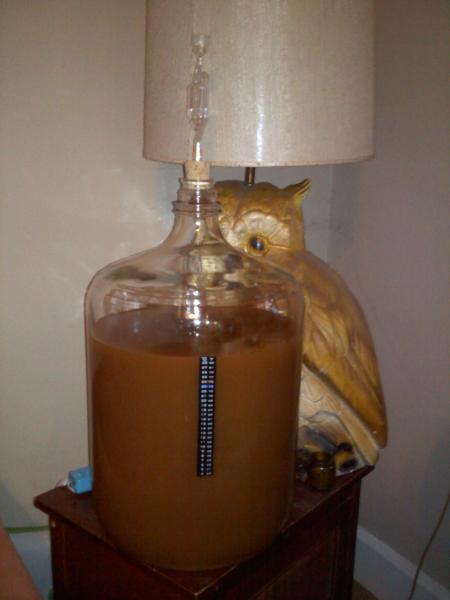 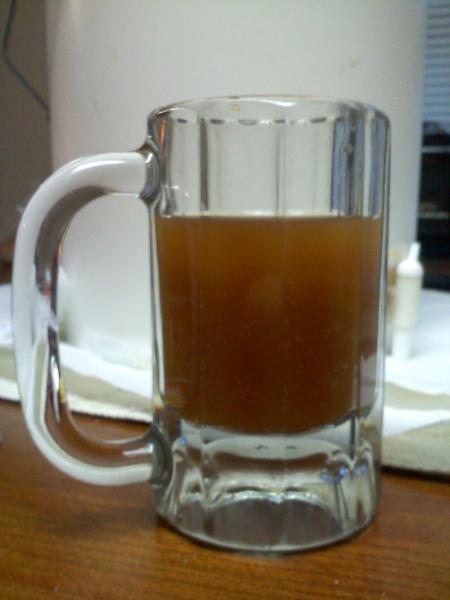 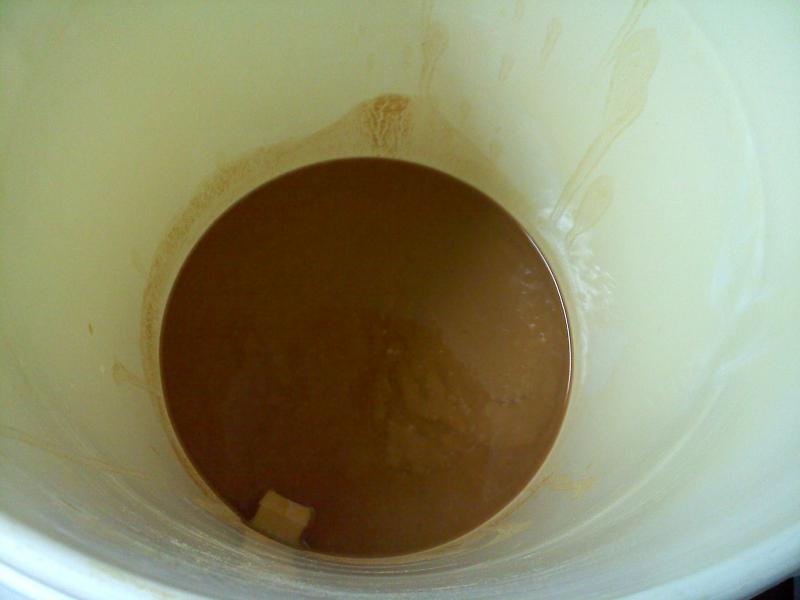 Not that it's any huge deal, but I always throw a towel or dark t-shirt over my carboys to keep the light out.

Good idea about the towel. My girlfriend just got a sewing machine. Maybe I can have her make me a carboy "shirt" or something haha.

The owl lamp is pretty cool, but it sure takes up a lot of table space!

Also, if no one noticed it yet, that is a real cork in the top of the carboy, not a rubber stopper. It is a very temporary solution until my carboy cap arrives in the mail tomorrow. It seems to be fitting pretty snug in there. I haven't seen any activity with my airlock yet, but I'm sure it'll take some time to build the pressure back up.
OP
OP

By the way....Is that too much headspace there?

did you steal that thing from my great grandmother

headspace isn't a problem with an active ferment, which you should still have
OP
OP

dinnerstick said:
did you steal that thing from my great grandmother

headspace isn't a problem with an active ferment, which you should still have
Click to expand...

my dogs would bark at lamp that all day long! awesome.

make sure if you rack again, which i suggest, you rack into a 5 gal. carboy and top up to the skinny part of the neck. headspace is fine now, but once you get to aging, i always top up.
as with everything, others disagree.
some think that if you do your final rack before it bottoms out, then the co2 generated will displace any o2 and headspace isn't an issue. i disagree with this only because it's not like the co2 floats on the bottom and pushes all the o2 up first. it all mixes and it takes a fair bit of fermentation to replace all the air easily dne during primary ferment, but i don't see enough being generated during a drop from 1.003 to 1.000 or something like that. again, just my thoughts though.
OP
OP

I went ahead and added more cider to the carboy. I was going to do it anyway, so I figured I'd do it now rather than later when I want the fermentation to slow down. So I will be racking it again for sure. I'll check the gravity next week to see where it's at.
OP
OP

Wow, my airlock is bubbling like crazy now. 3 times a second! Looks like that 1.5 gallons of cider I added last night stimulated the yeast quite a bit.
OP
OP

Week 2 Update: Just checked the gravity, and it's checking in at 1.020. The trend so far is that it has dropped .040 after 1 week and an additional .020 after 2 weeks. If this trend continues, it'll be down to 1.010 next week, 1.005 the week after, but I'll take readings to verify. I tasted what I siphoned out and it is pretty damn good so far. There is a noticable "bite" of alcohol to it but it isn't unpleasant or over-powering by any means. It is still sweet, but no where near what it was at my last reading. I was planning on racking a 2nd time initially because I added more cider, but there isn't too much sediment for me to justify doing that again. I'll make a judgement call on that next week. If I leave it alone, then I'll wait till it drops between 1.000 and 1.005 and start the bottling process. I have been reading up on stove-top pasteurization and I just might have to try that. I don't have the fridge space like I used to.
To anyone with experience on this: any noticable difference in flavor between cold crashing and stove-top pasteurization?
OP
OP

EDIT: made my question into a separate thread.

First ever cider, not sure what's next?

T
unsure first time brewer: can someone check my process?

C
Cider-making 101 for a brewer but first time cider maker?