GilaMinumBeer said:
Ahhh. Gotcha. I work in a permits department and made sure my trellis was acceptable before I broke ground. My neighbor can bitch all he wants caus ethere is no restrictions on garden structures in OKC and no permit required. Plus, I have taken great efforts to ensure my plants don;t invade his property.
Click to expand...

Yeah, I checked my plat of survey, easements, and local codes and found no restriction on garden structures and required no permit. Didn't matter to the neighbor because she would rather be an "anonymous" PITA and waste time and tax dollars than to walk over and ask me about it.

Well, if my daughter will go down for a nap before sundown I can get my 100mm macro lens out and get some detailed bine shoot pics and maybe a generic trellis pic (although it ain't much without bines growing up yet!
C

My hops are on order, hopefully they come in soon. I plan on growing them on this arbor I build last year.

If all goes well, I will post more pics of the arbor covered in hops.
OP

very nice carndog!! how tall is that?
OP

My Chinook... they were literally a half inch a week ago. 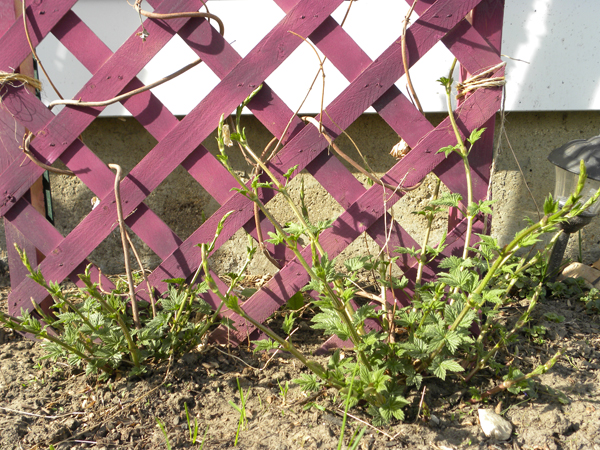 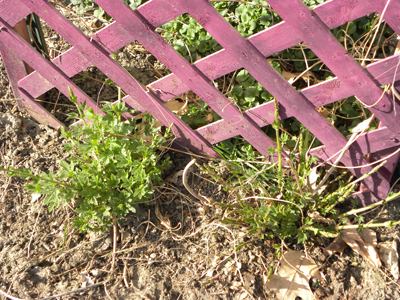 sethful said:
very nice carndog!! how tall is that?
Click to expand...

Recycled outriggers. It hard to see them from just about all angles, which may be a good thing. Question: is jute strong enough to support a bine?

My two year old cascade was 6 inches last weekend and now 3 ft and starting to grab a hold of its line. 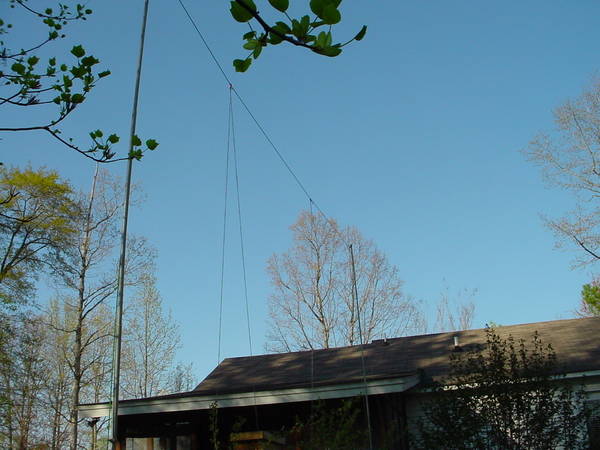 2nd year fuggle and cascade. These things are tough as nails! I didn't do ANYTHING then walked out one day a couple weeks ago and the cascade was going gangbusters. For scale the cascade is around 16-18" tall. FYI the wife's small vegetable garden is in the center, she just hasn't gotten around to it yet.

Planted two Cascade rhizomes last Wednesday. When I returned from a weekend away, I found them already through the soil. Can't wait for some big growth!
R

Where do you guys buy these and what would grow best in Kansas?

Do any of the the box/hardware stores sell hop twine? If not does anyone substitute other twine?
F

Vtbrew said:
Do any of the the box/hardware stores sell hop twine? If not does anyone substitute other twine?
Click to expand...

yes, i used it last year.

I just use sisal twine from Lowe's, but I only have four plants so I don't need a ton of it and don't have to be too cost-conscious.

ive already trimmed and trained one of mine. 4 bines already over 4' tall

Atl300zx said:
ive already trimmed and trained one of mine. 4 bines already over 4' tall
Click to expand...

Lets hear it for Atlanta weather! My cascades are about 3' already too.

Recent "summer" like weather here in NJ helped pop my nugget up! 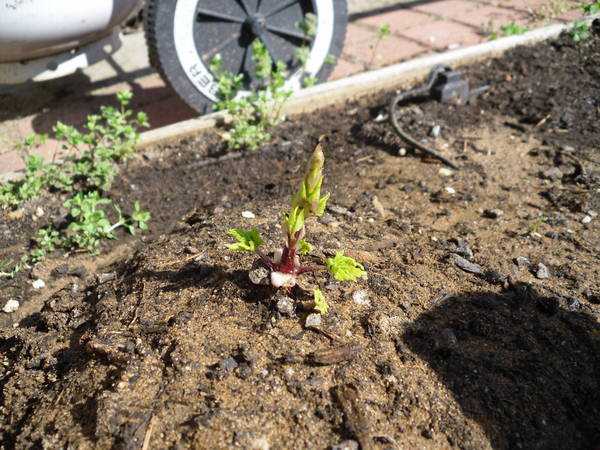 Here's my hop garden but theres no garden yet. They've only been in the ground for four days. I've got three Cascades and one Willamette planted at the corners of this pergola. It was a pain to build but I hope it along with the hops can provide a nice shady spot to enjoy a nice homebrew.

OK when I figure out how to add a pic I will post it. THey are in my profile if interested.

from Lowes drilled a few small holes in the bottom for drainage just over $6 for a 20g container, add 160 pounds ($5.20)of top soil and rhizomes . can't wait! added wood tomato stakes for the trellis. will post pictures later.

here is how i am planning on putting up the trellis. 8' tomato stakes with hooks a the top so i can feed the twine through to allow them to continue to grow up. ( drilled a pilot hole to avoided cracking the wood, the screw driver just helped screw in the hook.) 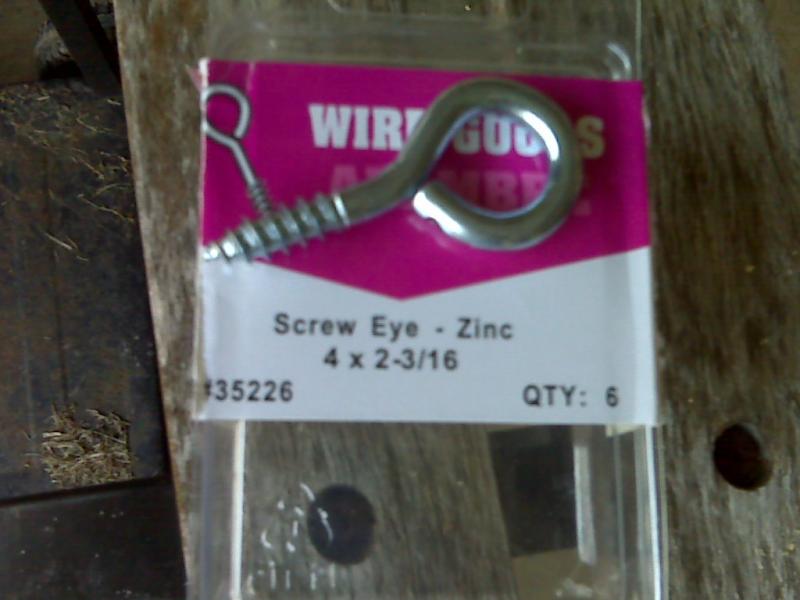 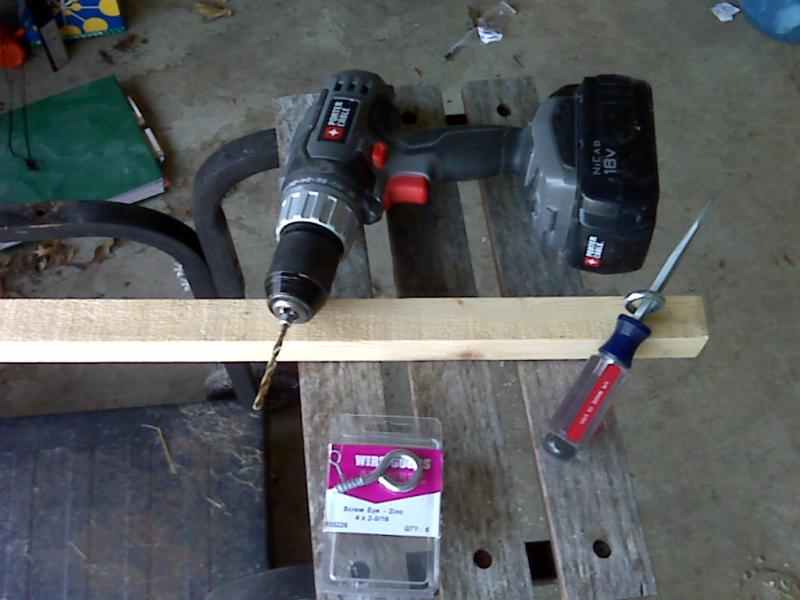 johnnyc said:
Lets hear it for Atlanta weather! My cascades are about 3' already too.
Click to expand...

Hell, mine are almost that long in Chicago! Global warming to the rescue!
B

Location
Land of the Free

4 of my 5 ~2 week rhizomes have FINALLY broken ground!

A pox on you and your hops! Just took a look at mine, all 4 & 5 year plants. Only the Nugget is beyond the sprout stage and three hops haven't even broken the surface. Another ten days of cold and rainy on the slate and frost in the morning.

My neighbor, who has been farming here for 70 years, told me the weather we've had the last five, "Just ain't right."

My cascades are doing very well, but my Chinook is going nuts. I culled down to four bines per plant, and a couple of the Chinook bines are already better than five feet tall.

(It looks taller than six feet in the pic, but they're growing in ~18" tall containers.)

Can you experienced growers offer any suggestions as to what rope/twine to use?

Thanks Rick500! I figured that pretty much anything would work, but it would need to be fairly UV stable and fibrous.

I'm not sure that's the absolute best thing to use, but I used it last year and I'm using it this year, and there were no problems at all. And it's cheap.

Also biodegrades pretty quickly. I just tossed it into the compost along with the spent bines last year.

Rockchalk said:
Where do you guys buy these and what would grow best in Kansas?
Click to expand...

I'm in Lawrence. Last year I was able to grow both Cascade, Nugget, EKG, and Fuggles no problem. However, my Northern Brewer did not do so well. That isn't to say they can't, but the wet weather gave them the mildew something bad.

One note: When you make a trellis, be sure to secure them properly. A lovely Kansas thunderstorm blew mine over the first year.

As for a place, I always order from freshops.com.

if you live in a windy area, make certain your twine is multi-strand. Single strand twine has a tendency to pull apart, if it isn't kept tight.

Today I'm turning some off-shoots into rhizomes by burring them in the ground. I plan to dig them out later and use them as rhizomes for new plants.

Rick500 said:
My cascades are doing very well, but my Chinook is going nuts. I culled down to four bines per plant, and a couple of the Chinook bines are already better than five feet tall.

(It looks taller than six feet in the pic, but they're growing in ~18" tall containers.)

time to start chopping. my cascade is doing very well but unlike you my chinook hasn't even broken ground yet
D

Both the Centennial and Hallertauer have started to sprout here. Some of the Centennial shoots are 4 to 6 inches tall and the Hallertauer are about 2 inches. This is the second year in containers. I got growth to 6 ft or so on the Centennial last year and about 3 on the Hallertauer last year, but no cones. I am at 7000 ft asl on the east slopes of the Sandia Mountains. Last Freeze is still a month away, but if these shoots freeze, new ones will be sent up. After all that is what perennials are all about.

The soil has settled in the containers, so I need to fill in with some potting soil and it is time to fertilize. I use Ozomocote, just scratch it into the surface.

I watered heavily last night as we hadn't had moisture, either snow or rain, in the last week or so.

I have high hopes for the hops this year.

Scooby_Brew said:
Today I'm turning some off-shoots into rhizomes by burring them in the ground. I plan to dig them out later and use as rhizomes for new plants.

You can do that? Awesome. Much more productive than just chopping them.

Synovia said:
You can do that? Awesome. Much more productive than just chopping them.
Click to expand...

After 2 years you don't have to do anything but dig a foot or 2 (in just about any direction) from the top of the mound.
Q

i checked my hops today and have a couple that are about a foot and a half or 2 feet tall i was shocked actually because i wasn't suspecting anything more than a couple of inches out of the ground like somebody mentioned earlier must be the global warming. somebody asked about neighbors when my dad and i put up my trellis i had a neighbor staring at us so i started to say things like "this will sure look nice on fire" just to mess with them, but they had no problems once it was up they asked me if i was growing grapes.

Cascades went from 2 ft last weekend to 7 ft this morning. 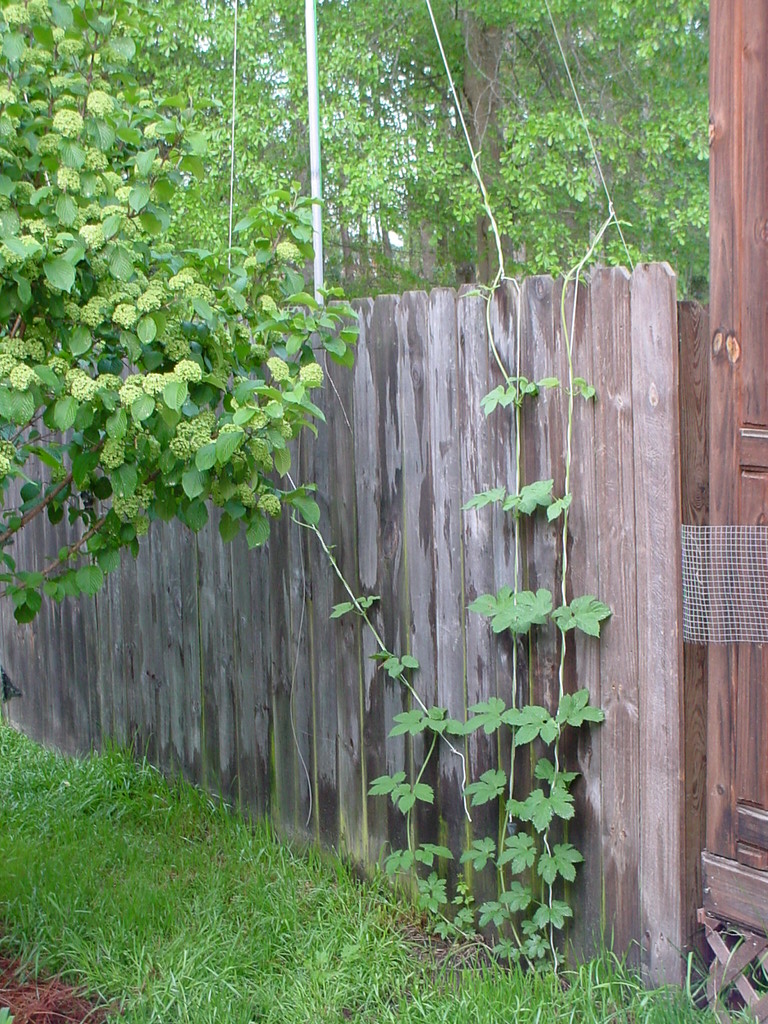 Ahhh they look beautiful.... I have to string up my twine this weekend as mine are almost a foot long and growing like weeds..

Here are what my 6 cascade plants (second year) look like today:

I have one Cascade, one Mount Hood - last year, just from those two plants, I ended up with a couple of pounds. A week ago, they broke the surface. Today, there are shoots three and four feet tall. Wow!
R

Aurora IL, here. My 2nd year hops are between 2' and 2.5' tall. My brain tells me to cut them down, but my heart says let them grow.

My 1st year hop bed has numerous hops 'peeking' through the ground.