My setup is the typical 10 gallon orange Gott cooler with conversion - however, do not have the braid installed yet, so I went with the VLGB(very large grain bag).

Conditioned cooler with 4 galls 170 water, then drained it. Threw all grains in the bag, and doughed in with 3.5 galls @ 170 as Ed describes.

OK, now the issues. First batch sparge - 5 litres of 175 water. Tossed it in there, stirred it around, and opened the spigot.

Saw no appreciable change in the stuff coming out of the MLT.

Saw no appreciable change in the stuff coming out of the MLT.

Figured that I had vorlaufed enough since Ed mentioned a 2 quart effort on his system, and I had done the whole volume.

Drained all into the kettle.

Second sparge - same deal. Vorlaufed like a madman - no change in clarity/composition of the wort flowing into the kettle, so after a few shots, I just ran it in.

*Note - heated up all sparge water in one kettle to 175(added 1 tsbp gypsum as well), and added in the two separate sparges).*

Went thru typical 60 minute boil with hop additions as mentioned in Ed's instructions.

the following pics are right before transferring to primary and pitching: 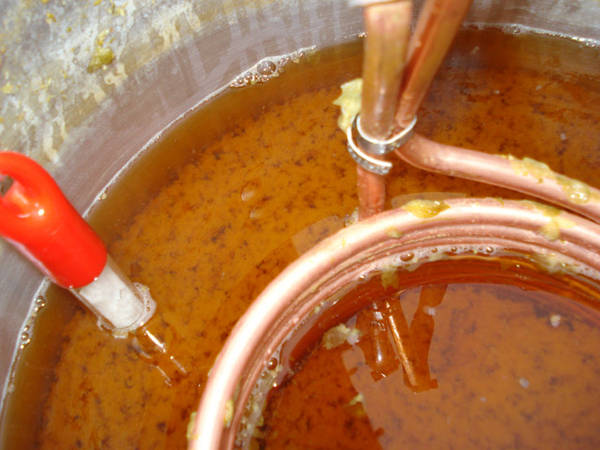 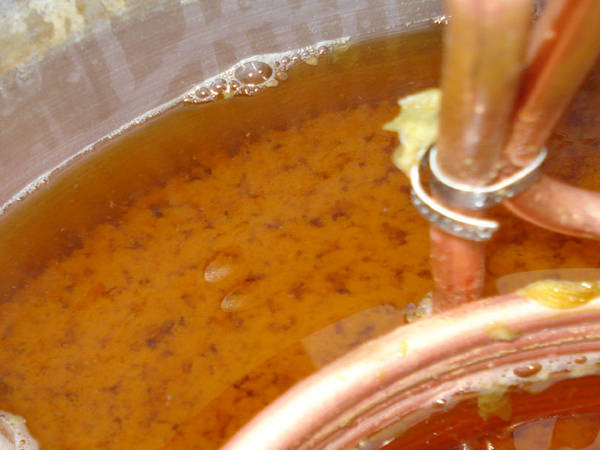 My question is - what is all that $h!t in my wort? Is this normal? It looked like there was a gallon of snot in my wort. Thanks.

That "snot" is break material- you must have good luck with chilling fast, because that's what you want to happen. That is coagulated proteins that are dropping out of suspension because you chilled quickly enough. That's one of the reasons we recommend the "whirlpool" after you chill- so that all that crap falls into a cone and you can siphon away from it. I've heard it's actually good for the yeast, but I don't know that to be a fact.
OP
OP

Thanks for the quick response, Yoop.

One thing I neglected to mention is that all of that crap went into the primary with the yeast - sounds like from your comment that might be OK?

Edit- it would have been really fun to mess you with and say "OMG- I've never seen anything like that! What did you DO?" etc. But I wasn't smart enough to think of that!
S

The break material is one of those things where it looks quite a bit different than the extract recipes. I just did a version of the recipe today, and it looked the same.

I'm fairly new to AG myself, but if I understand vorlaufing correctly, you want to recirulate until the chunks of grain quit running through, typically about 8 cups for me.

Welcome to the club.
OP
OP

Yoop - thanks for your help. I feel much better!

Glad to hear it! And by the way- sweetcorn is correct about the vorlauf. I'm thinking that since you were using a grain bag that it was an efficient filter for you so you didn't notice a change. Usually the first quart or so has some grain bits and cloudiness that clears up quickly. Since you didn't notice a change, you probably didnt' have any grain in there to begin with. So it sounds like you did just fine!

Did you figure your efficiency yet?

I've seen this before,

Yoop - ashamed to say I was kind of distracted and forgot to take a sample for OG. So, not sure what my efficiency was.

Glad to say it is fermenting away right now, though, ~12 hrs after pitching!

Had a Great Experiment with Mash Additives Planned... then Brew Day Happened

B
My first All Grain - Suggestions welcome

Sep 6, 2021
Bill9000
B
A
IPA trouble getting dry hops to settle, even with gelatin and cold crash