Pain. Pure unadulterated pain, incarnated in a hellish nineteen hour brewday, of which remains engraved in my woeful mind, desolated in a mist of agony. So yea, pretty interesting brewday.

Me and friend decided to have a discussion on what would be the absolute hardest thing we could brew, and at first the typical contestants where thrown into the mix, Pilsners, Lambics, Adjunct Lagers, etc. Then, as a joke, a foolish joke in hindsight, I recommended making a Lager that was entirely malted corn, and doing a German-style triple decotion. I was never actually going to do it, but man, do I wish I kept my mouth shut. Then after a series of foolish lost bets, I found myself squandering the internet for a Malt House that sold malted corn at an affordable price. That alone was a story to tell, however it's not this story. So after purchasing my malted corn, I wept a little, and prepared for the tumultuous brewday ahead. Now, before I get into the nitty-gritty of it all, it should be noted the reasons why dealing with malted corn is a pain, with the first one being the low diastatic power. And by low, I mean LOW. 35 entire degrees of Linter. That's barely enough to fully convert itself, and made it so deoction mashing was entirely necessary. Also, while corn as a whole does have husks, the well, corns of corn, do not contain husks, making lautering comparable to the 9th layer of hell. And the final reason why dealing with malted corn is hell has to be the insane levels of DMS. Undermodifed malts have DMS in spades, and so does maize, so when you combine the two you have an unpleasant beer if the proper precautions aren't taken. So, with all that out of the way, now it's time to get into the brewday


The first step of the brewday began in crushing the large maize kernels into a consistency that would insure the most efficiency and highest yield, and so I doubled crushed in the finest setting of my mill. Then, I mashed the beer first at 110 degrees Fahrenheit for about an hour 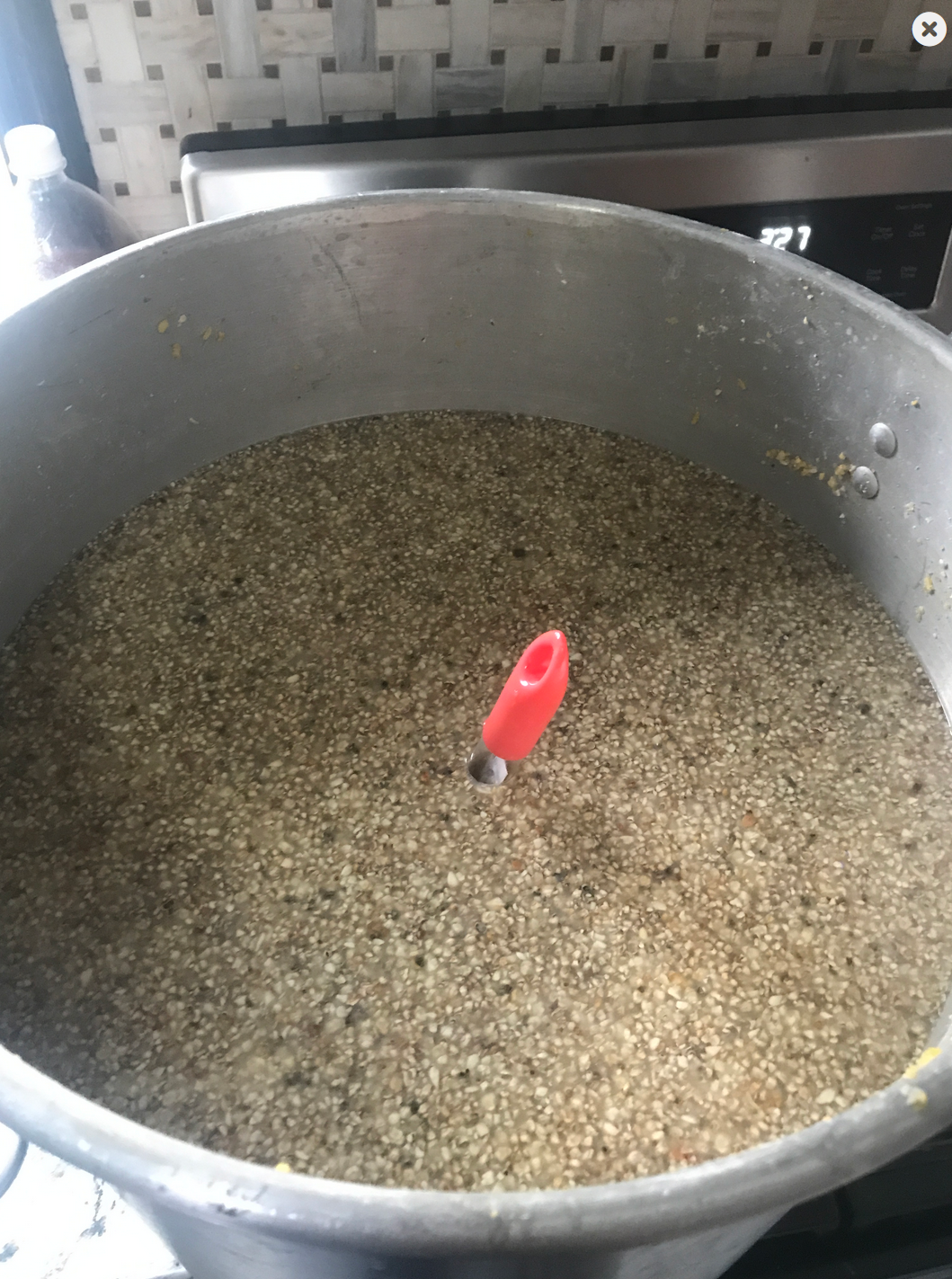 However, this turned out to be rather useless as, I was SO excited to find out, maize doesn't contain large amounts of the enzyme Phytase, and while it DID lower the pH SLIGHTLY, and didn't do so to the level needed to help bring the pH down to the 5.2 range I desired, so I added couple mL's of lactic acid. At this point, the wort tasted like a spoonful of acidic Argo with a smidgen of sweetness, and it was then and there I knew, this brewday was gonna be one I never forgot.


So after a hour in the "Phytase' rest, I slowly brought the temperature to 127 degrees F where I left it for 30 minutes, and 12 minutes in I decoted 10 quarts which I boiled for 10 minutes, and at high temps to try and get melanoidins. Funny thing was when I tasted a small sample of the decotion, it was insanely sweet, and reminded me of southern cornbread but with a LOT more starch. So after 10 minutes I added the decotion back to the main mash and it raised the temp to 150 F, which later went down to 149 F, which hopefully didn't hinder too much of the beta amylase process. So then, I left it at 149 f, only turning the burner on occasionally to keep the temperature consistent, for 2 hours. In 1 and three quarters of those hours, it felt as if nothing happened, and the wort tasted like a spoon full of starch still, until the VERY last part of the mash where some sweetness began to show, and by the end of it, it began to officially become sweet enough where it registered in my brain as wort, but was still considerably starch. So I decoted about 8 quarts of thick mash and boiled for 30 minutes, and it brought up the temperature to 158 F, which I left for another hour. After which, I brought the temperature to 169 F for mash out

After that, starch was no longer perceivable to my tongue, however, it was still very present in the wort itself and it still failed the iodine test 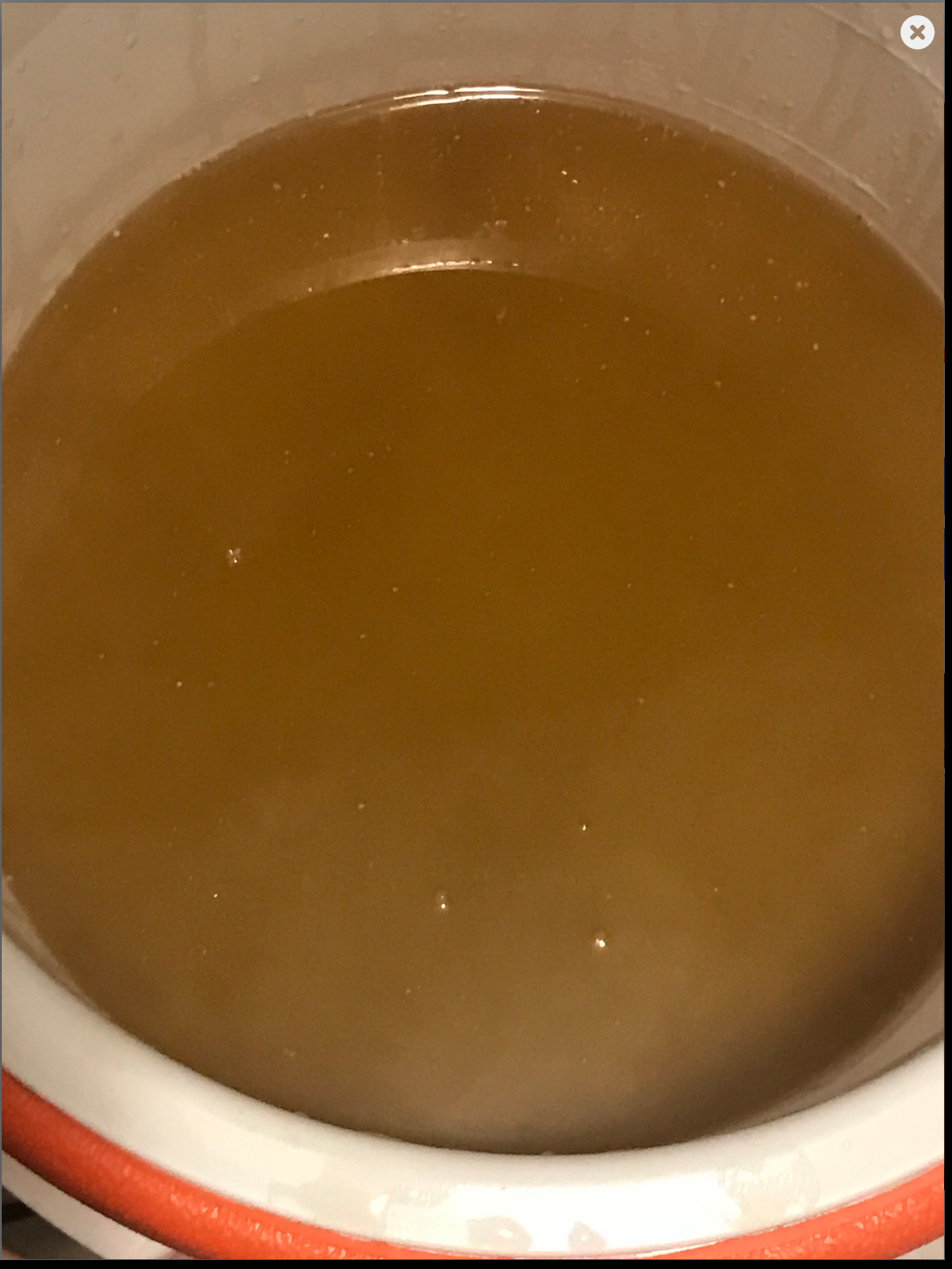 Sampling the fully "converted" wort, it dawned on me that this was not going to be a usual beer. It was insanely sweet, and had malt characteristics, but it had a distinctive corny flavor, not similar to that of previous adjunct lager brews. It tasted almost like a corn muffin which had been blended up with a subtle hint of malt. Also, hints of caramel. Caramelized corn. Appealing, I know. I quite enjoyed the unhopped wort, and honestly could have drunk it as is, however my friend wouldn't have accepted sweet corn juice as a beer, neigh it have some variant of Saccharomyces in it.

Anyhow, at this point I forgot that I needed to do a sparge, so I grabbed around 4 gallons of my treated water, and sparged at 170 F for 20 minutes. I had about 9 gallons of pre-boil wort, and this is where my financial burden began. There really was no other way around it, I had to do an extended boil, and an extended EXTENDED boil. 2 hours. 120 minutes. After the protein rest, I somewhat expected the protein to be decimated, however to my shock there was a lot of protein. Like, a considerable amount more then expected. Also it was yellow. 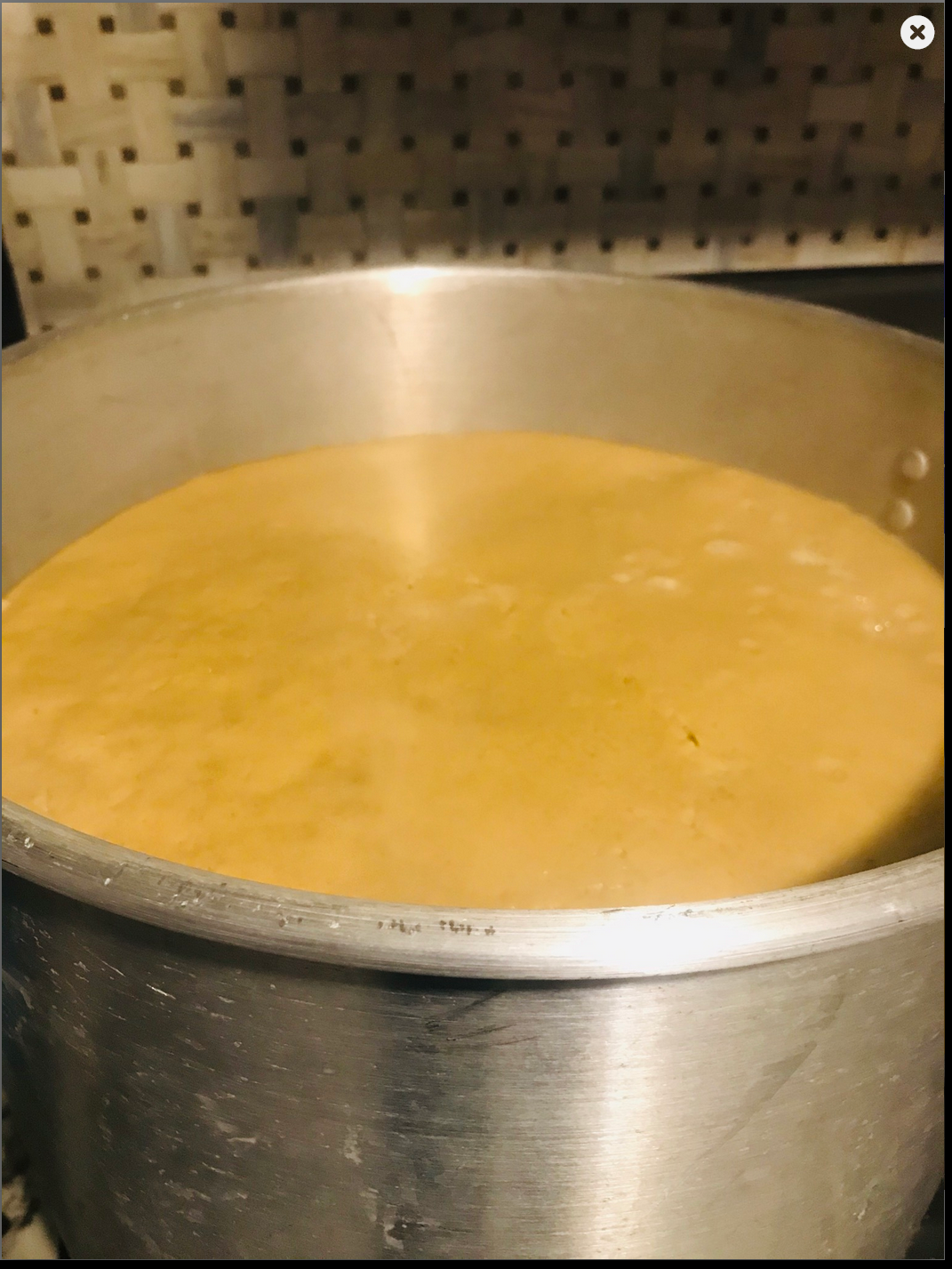 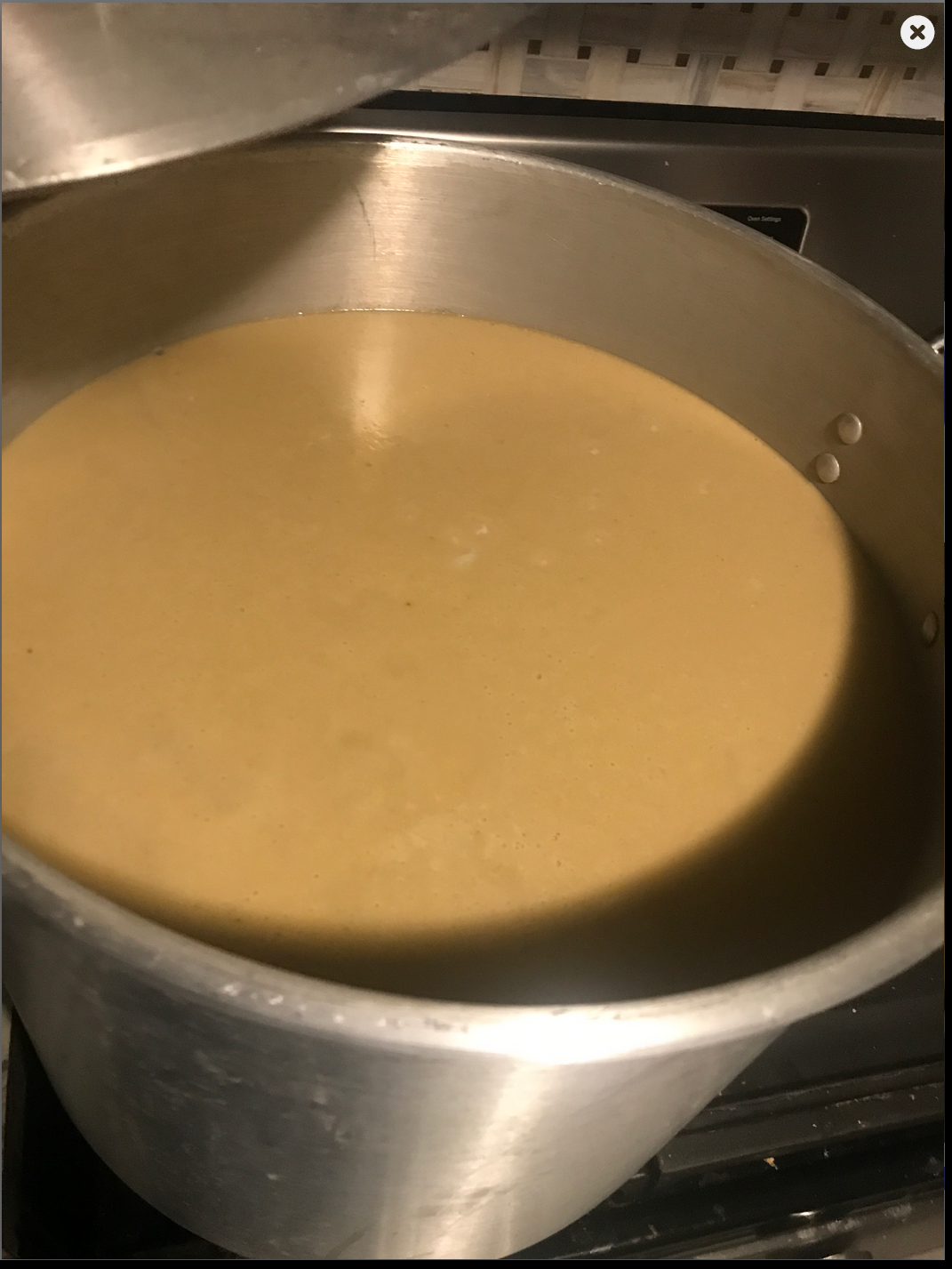 Then it reached a boil, and for about an hour I did nothing, but I did have a confused wife asking why the house smelled like freshly baked Corn Muffins. Then I added the hops, 15 grams of MH in 60 minutes, 56.6 grams of MH in 30 minutes, 38 grams in 15, and 45 grams in boil off. I love Mount Hood, and I totally didn't use a crap ton of hops to try and hide any off flavors I might have gotten from the corn. No, never. Especially since, it failed, and when I tasted the wort, it was delicious, but I could still very easily make out the corn flavor. However, it wasn't awful. It was actually rather pleasant, and after the extended boil it truly tasted like malty corn, and had a beautiful balance with the hops, with enough bitterness to not be cloy but not so much hop flavor it masks out the corn malt. 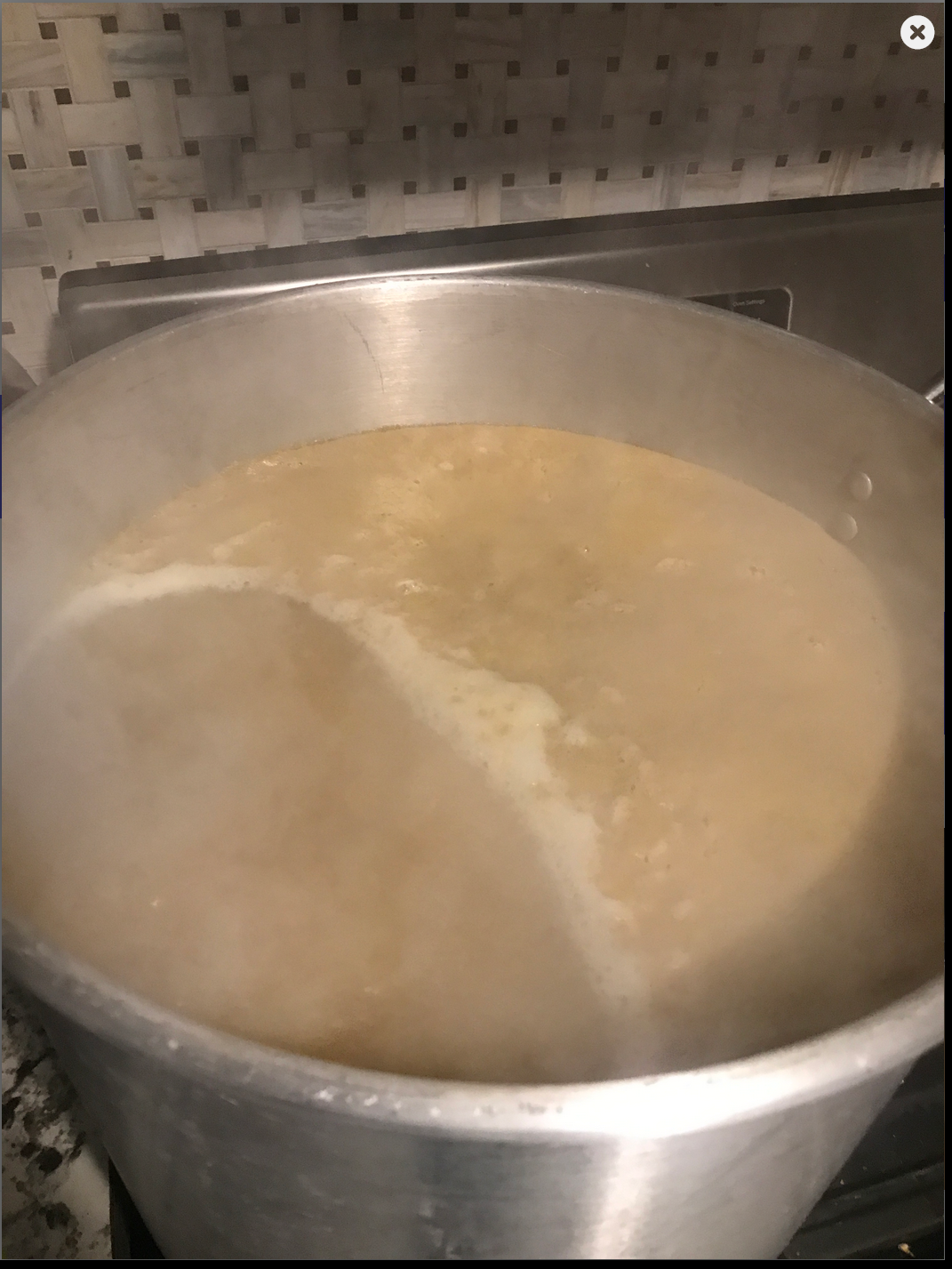 After this bloated elongated brewday, I finally finished, let the hops and starch settle to the bottom and placed the liquid in my carboy then I pitched the wort to 50 F, removed 2 gallons which I will use for krausening, and fermented this at 48 F using two pkgs of w-34/70, aaaaaaaaaand now the beer is fermenting. I'll probably continue this thread if anyone cares to find out what happens. But yea, an 100% malted corn lager, double decotioned. Even if this beer turns out incredible, I will probably never do this again. If anyone else attempts this, please, prepare for hell.
A

Sounds fantastic. Totally going to try this myself.

Sugar Creek, my favorite (and local) maltster, has a few types of corn malt.

Sometimes you must suffer for your craft. Caleb @ Sugar Creek is doing it right.

What gravity were you aiming for and what did you end up with?

I totally respect everything about this and glad that you are finishing it properly by kräusening. Can’t wait to hear how it tastes.
OP
OP
J

Witherby said:
What gravity were you aiming for and what did you end up with?

I totally respect everything about this and glad that you are finishing it properly by kräusening. Can’t wait to hear how it tastes.
Click to expand...

1:050, but actually ended up somehow at 1:060. I diluted it down with some distilled water back to 1050 as I did not want to make this a boozy beer. Also, I may have boiled for slightly longer then anticipated since I had slightly less post boil wort volume then calculated. No clue honestly.
Last edited: May 5, 2022

A decoction mash will get you much higher brewhouse efficiency. Thus, your 1.060.
H

Hi!
How did it come out?

Attenuation low. What is everyone doing to get good attenuation?